At Texas Children’s Hospital, we believe that prevention is just as important as treatment. In partnership with Project ADAM®, we aim to help prevent the deaths of children and adolescents due to sudden cardiac arrest.

Project ADAM (Automated Defibrillators in Adam’s Memory) aims to prevent sudden cardiac arrest in children and adolescents through education and implementation of life-saving programs. Project ADAM began in 1999 after a series of sudden deaths among high school athletes in southeastern Wisconsin, including 17-year-old Adam Lemel. Many of these deaths appeared to be due to ventricular fibrillation, a condition in which the ventricles cannot pump blood into the body. Adam’s parents, Patty and Joe Lemel, and David Ellis, Adam’s childhood friend, collaborated with the Children’s Hospital of Wisconsin to create this program in Adam’s memory.

What is sudden cardiac arrest?

Sudden cardiac arrest (SCA) is a condition in which the heartbeat stops abruptly and unexpectedly. This may be caused by abnormal, or irregular, heart rhythms, called arrhythmias. A common arrhythmia in cardiac arrest is ventricular fibrillation (VF), an abnormality in the heart’s electrical system. VF occurs when the heart’s lower chambers suddenly start beating chaotically and do not pump blood properly. Death occurs within minutes after the heart stops. Cardiac arrest may be reversed if CPR is performed and a defibrillator is used to shock the heart and restore a normal heart rhythm within a few minutes.

Sudden cardiac arrest can happen to anyone, at any age, with little or no warning. SCA often occurs in active individuals who appear healthy and have no known medical conditions. Commonly, SCA is the first indication of a heart condition. However, some people can be identified in advance as being at risk for SCA. Early warning signs of possible heart disease include:

What is an AED? 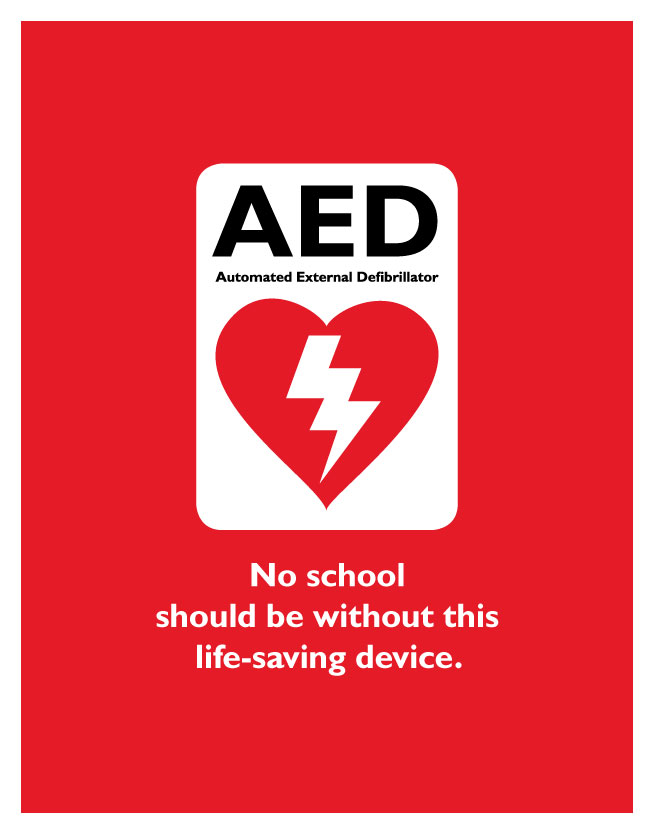 An automated external defibrillator is a lightweight, portable electronic device that delivers an electric shock to the heart. When the heart is in sudden cardiac arrest, a shock through the chest (which travels to the heart) can halt an abnormal, ineffective rhythm and reestablish a normal rhythm. Why do we work with schools? Approximately 20 percent of a community is in its schools on any given day. By focusing our efforts toward schools, we are able to reach both young people and adult staff and visitors to the schools. Likewise, by educating youth, we are able to affect a cultural change in the awareness of and response to sudden cardiac emergencies.