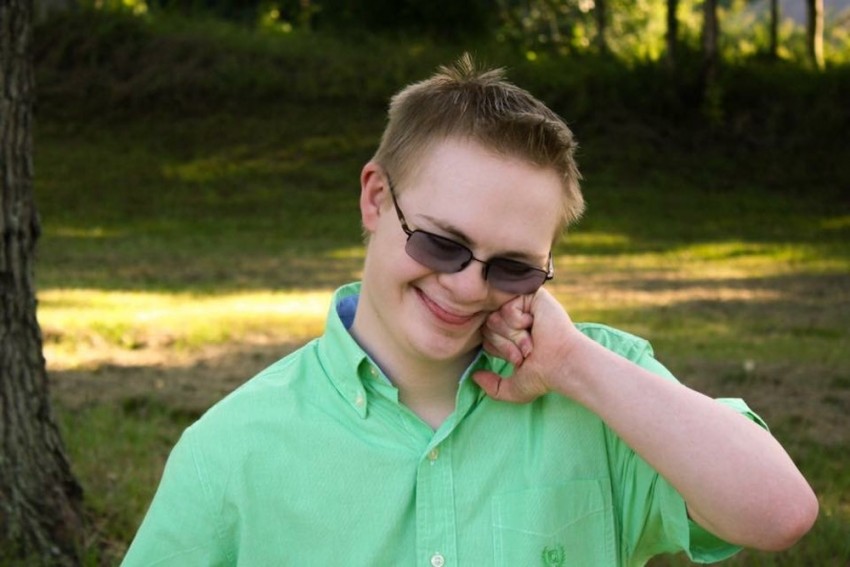 My son Tyler was born with Down syndrome and autism. Because of this, his verbal communication has always been limited.

When Tyler was born, he didn’t have regular bowel movements and frequently experienced abdominal distension. His pediatrician felt these symptoms were a result of the low muscle tone associated with Down syndrome. We tried various tactics to increase his mobility, but didn’t have any success. This was before the days of the internet, so I went to the library to do my own research. I found a book with one sentence mentioning that if a baby with Down syndrome suffered from constipation, they should be screened for Hirschsprung’s disease. I didn’t even call our pediatrician. Instead, I went straight to a geneticist at Texas Children’s Hospital. When he was 8 months old, Tyler was in fact diagnosed with Hirschsprung’s disease, a congenital condition in which the intestinal nerves fail to properly develop. At 10 months of age, he had a laparoscopic pull-through for Hirschsprung’s.

Tyler was much better after surgery, but continued to suffer from mild gastrointestinal (GI) issues. Over the years, he would have multiple bowel movements on some days and constipation on others. He had several X-rays done, too, which only showed excess bowel gas. Tyler’s gastroenterologist performed a colonoscopy, an endoscopy and an upper GI series. None of them lead to any answers.

Tyler’s GI issues intensified when he was 14. He began having episodes of dry heaving, and he would double over in pain. I noticed him positioning himself with the arm of the couch pressing into his tummy, as if the pressure helped his pain. The episodes typically only lasted for a few minutes, but I began to worry as they became more frequent. I brought Tyler to the pediatrician several times, but his symptoms always resolved by the time we arrived. He’d be so happy to see his doctor, which probably made me look a little crazy.

Tyler finally started to become aggressive in an attempt to communicate to us that something was wrong during his episodes of pain. His pediatrician referred us to a new gastroenterologist who felt Tyler’s symptoms were the result of swallowed air. We were told to give Tyler probiotics and put him on a low FODMAP diet. I knew he needed more than a diet change, though.

The next time Tyler had an episode of pain, we decided to take him to the emergency center at Texas Children’s Hospital. They did an X-ray, but it looked normal. A bump had popped up near Tyler’s belly button during this episode, so the surgical resident thought Tyler might have had a hernia. He advised us to speak with Tyler’s doctor the following week.

Tyler refused to eat anything the next day. I was so frustrated by the lack of answers that I ended up phoning Tyler’s pediatrician to ask for help in advocating for my son. I knew something was wrong, but felt like I was out of options. The pediatrician called the gastroenterologist, who scheduled him for a barium enema.

Before we even arrived home after the barium enema, Tyler’s gastroenterologist called to say the test indicated Tyler had some kind of intestinal blockage. They were unsure what was causing the obstruction, but didn’t think it was an emergency. We were encouraged to meet with the surgical team later that week. They also said if Tyler showed any signs of pain or vomiting, we should head straight to the hospital.

That night, Tyler woke me up and asked if I would take him to the doctor. Immediately after asking, he started vomiting green bile. I knew what to do, and we headed straight to Texas Children’s.

The surgical team prepared Tyler for surgery. They were still unsure what was causing Tyler’s obstruction, but they were worried it might be cancer. When Tyler was out of surgery several hours later, we learned it wasn't cancer. He had an intestinal malrotation, a twisting of the intestines, and a partial volvulus. His small intestine had become wrapped around his colon, which was mobile. They placed a cecostomy tube for bowel management, and Tyler spent the next 21 days in the hospital.

We hoped Tyler’s GI issues were behind us after the intestinal malrotation diagnosis, but he woke up vomiting yellow bile six months later. Tyler had developed adhesions that were constricting his bowels, causing another volvulus. Surgery didn’t go as smoothly this time around.

Tyler was admitted to Texas Children’s with a nasogastric tube in an attempt to decompress his obstruction. As they monitored him, Tyler’s skin became very pale and his lips turned grey. The resident took one look at Tyler and left to page the surgeon. She arrived moments later, and they rushed Tyler to the operating room.

As I watched them rush Tyler away, I had a horrible feeling in my gut that the surgeon was going to come back and tell me Tyler had died. My husband was at work, and I was there by myself. I was so scared as I waited for an update. The surgeon came out as soon as she could tell me Tyler was in septic shock and had coded on the operating table. They were able to revive him, but weren’t sure if he would make it.

Tyler had six surgeries in the following six days. He spent several weeks in the ICU on life support. We never left Tyler’s side when he was in critical care. We didn’t want to miss a single doctor or shift change. Our faith, friends, pastor and church family were the only things that got us through this difficult time.

Tyler’s doctors believe he has adhesion related disorder (ARD), which means he develops adhesions more rapidly than the average person as his body heals. We’re eight months out from his most recent surgery, and I hold my breath every day. I get anxiety when he burps, gets bloated or doesn’t have a good bowel movement. I constantly wonder if the next time could be the time we lose him.

Even though it was difficult to get an intestinal malrotation diagnosis for Tyler at first, we absolutely love the surgical team at Texas Children’s. They have fought so hard for our son. They adore him, and have truly become like family to us. As hard as it is to constantly wonder if Tyler will get sick again, it helps to know his surgical team is just a phone call or email away.

This entry originally appeared as a story for the Intestinal Malrotation Foundation.