Jameson's story: The transplant that came out of left field 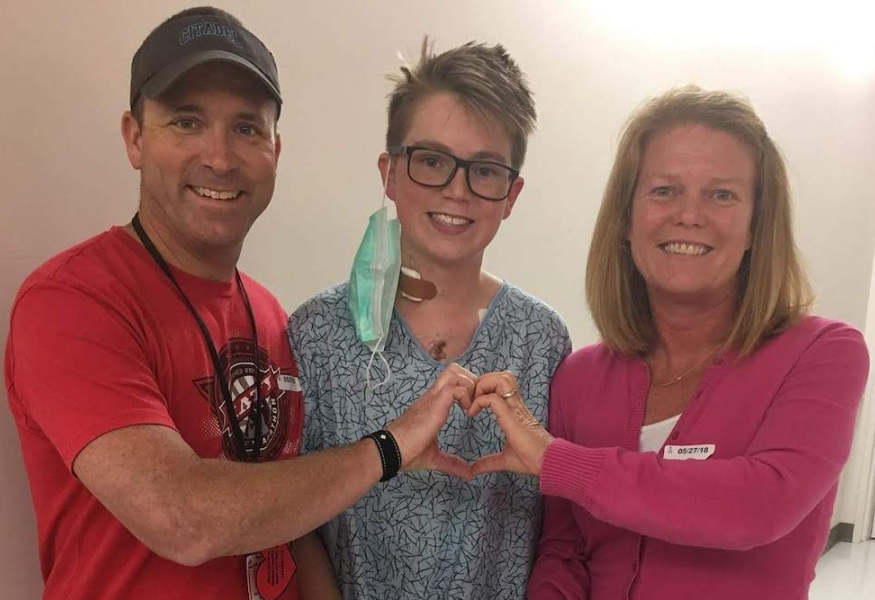 Jason Finney watched his family open gifts together through FaceTime with his wife, Sarah, on Christmas Day in 2017. Jason traveled out of state the day prior to support his father who required breathing assistance from a ventilator at the time.

“Um – Jameson just vomited in the sink,” Sarah mentioned. Their 12-year-old son was feeling under the weather.

Jason suggested sending him off to bed, assuming Jameson’s symptoms might subside with some rest.

Jameson’s condition worsened overnight, worrying his mother. Sarah swiftly took him to a local urgent care facility where the staff initially presumed Jameson’s gallbladder was the culprit. However, the atmosphere shifted once imaging results came back.

Once Jameson was admitted, his care team began performing some of the same diagnostic testing.

Finally, the hospital’s emergency medicine physician informed Sarah that Jameson was very sick. His heart was severely enlarged, taking up 75 percent of his chest cavity.

“I could feel my own heart sink,” Sarah recalls. “I remember asking the physician to look at me directly, and we both had tears in our eyes. I was shocked, scared and in total disbelief.”

This is when she called Jason, adding him to the conversation. The physician again confirmed the seriousness of Jameson’s condition before telling Jason to get back to Houston as soon as he could.

Fortunately, a bed was available in the Cardiac Intensive Care Unit (CICU) at Texas Children’s Hospital in the Texas Medical Center. The Kangaroo Crew quickly transported Jameson to his final destination, where a team of specialists anticipated his arrival.

In the meantime, Jason and his mother-in-law made their way to the closest airport and caught a flight to Houston.

Jameson was subsequently diagnosed with dilated cardiomyopathy, a condition in which the heart muscle – typically starting in the left ventricle – begins to stretch and become thin. This impairs the muscle from properly contracting, weakening the heart.

Jason and Sarah were in complete shock and – for a moment – denial. Jameson was an incredibly active, healthy young boy with no previous heart issues. How could this happen?

Dr. Jack Price agreed with them; Jameson’s predicament was definitely unique. While his team couldn’t identify the exact cause of Jameson’s condition, he promised they would continue to evaluate him closely.

However, the reality became grim at one point. Jameson would eventually need a new heart.

Once Jameson’s condition was stable, Dr. Iki Adachi was asked to evaluate his candidacy for a left ventricular assist device (LVAD) to hold him over until his transplant. Thankfully, Dr. Adachi said he could perform the implant in just a few days.

Jason and Sarah felt a little less anxious, so they kissed Jameson goodnight and returned home to get some rest.

In the morning, they got dressed and jumped in the car to drive to the hospital. That’s when Jason’s phone rang suddenly.

Dr. Barbara-Jo Achuff was on the other end of the line. “I’m at Jameson’s bedside – he’s moving too quickly for us,” she warned them.

It was clear that Jameson’s condition was deteriorating. “Dr. Adachi is going to do the surgery this morning,” Dr. Achuff said. “How far away are you?”

They were only 35 minutes away from Texas Children’s.

“When we got to the hospital, it felt like we were in a movie scene,” Jason says. “I stopped the car, literally tossed the keys to the valet and took the claim ticket from his hand. We jogged through the first floor lobby and headed straight for the elevator that would take us to Jameson’s floor.”

They arrived to a dramatic scene unfolding.

“Jameson was in shock from decompensated heart failure, which rapidly progressed with breathing difficulties, altered mental state and additional injury to his kidneys and liver,” Dr. Achuff recalls.

The surgical team was on the way, but it would take them nearly two hours to get ready before taking Jameson down to surgery.

“This can’t be how it’s going to end,” Jason remembers thinking to himself. They held Jameson’s hand for the next hour or so, taking turns to let go of his hand, step back from his bedside, go to the corner of the room and cry silently.

“I’m so scared,” Jameson mouthed to them with tears streaming down his face.

After what felt like an eternity, Jameson was taken to surgery. Dr. Achuff told his parents they “threw the book at [Jameson]” to get him there.

“Jameson was near death,” Dr. Achuff recalls. “It was truly a beautiful orchestration of teamwork and state-of-the-art care that turned the course for Jameson that day in the CICU.”

On Dec. 31, 2017, Dr. Adachi successfully implanted the LVAD. Jameson responded well to the device, recovering for a short amount of time in the hospital.

Jameson’s family received a call from their transplant coordinator, Kim Gilbert, who told them Jameson was officially on the transplant list on March 31, 2018.

“So because of the implanted device, Jameson was initially listed with priority status,” Gilbert said. “Obviously there are many factors that play into time period a child will wait for an organ, but we felt that [Jameson] probably wouldn’t have to wait too long.”

While waiting, Jameson returned to Texas Children’s Heart Center every couple of weeks for check-in appointments. When he visited on May 21, 2018, everything checked out.

The following night, his family received the call – Jameson’s heart was ready for him.

“I was scared and thrilled at the same time,” Jameson says. “This meant I wouldn’t be attached to a battery anymore. I would be able to swim again and play sports with my friends.”

Jameson waited on the transplant list for 52 days before Dr. Adachi successfully transplanted his new heart on May 23, 2018, at Texas Children’s. It was an incredibly smooth process for the family with no complication. Jameson was discharged from the hospital 11 days later.

When Jason and Sarah asked if any information could be shared regarding their organ donor, they were only told that Jameson’s heart was from a 16-year-old female.

In late October, Jameson’s family found a letter in the mail from the donor’s family, learning the name and story of their angel, Kaylee Montgomery.

Kaylee tragically lost her life after a fatal car accident in her hometown. Kaylee’s parents knew she would want them to donate her organs, as she was always a giving person. In the donation process, her organs saved the lives of six others.

Once Jason and Sarah connected with the family through Facebook, the Finneys traveled to Weatherford, Texas, to pay them a visit during last year’s Thanksgiving holiday.

If you’re wondering what Jameson is doing today, the answer is refreshingly simple. He’s back to being a regular teenager!

Jameson is incredibly athletic; he played basketball and track and field for Tays Junior High School and enjoys his time participating in tournament baseball.

“We experienced a feeling of peace through the power of pray and support as our family, friends and entire community embraced our family during this journey,” Sarah says. “Today, we live in the present – each day is a GOOD day. We’re truly blessed.”