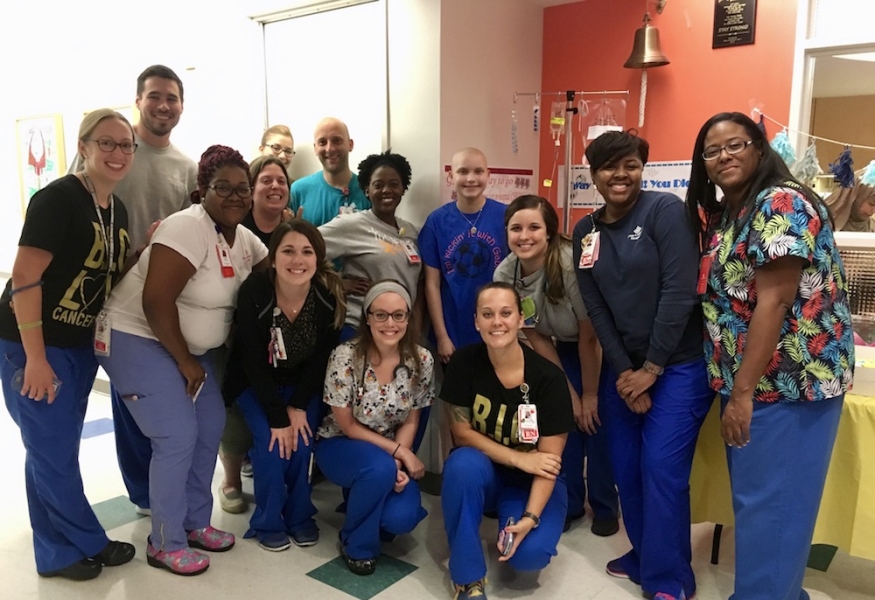 In the fall of 2015, Gabi was an active seventh grader – playing school volleyball, tackling club soccer and taking piano lessons on the side. When she started her athletic training program that June, she was suddenly plagued by intermittent pain and discomfort in her side. We thought the pain would subside with a few weeks of rest, but Gabi became ill and had difficulty breathing by November.

We eventually found ourselves at Texas Children’s, where a pulmonologist discovered fluid in Gabi’s lungs and advised us to rush to the emergency center to drain the fluid and seek the root cause behind it.

We had just celebrated her 13th birthday and were now in an unfamiliar hospital, surrounded by doctors speaking what seemed to be a foreign language. Dr. Rainusso and our medical team quickly identified the soft tissue mass covering three of Gabi’s ribs as Ewing sarcoma, a rare bone and soft tissue cancer. Unbeknownst to us, Texas Children’s Hospital is home to the renowned Faris D. Virani Ewing Sarcoma Center.

Following numerous tests, our medical team concluded that Gabi’s cancer was localized, and therefore had not spread to other parts of her body. The doctors were incredibly compassionate as they helped explain the cancer diagnosis to Gabi, alongside the treatment plan.

On Nov. 27, 2015, Gabi began the first of 14 rounds of chemotherapy. On top of the tidal wave of medical decisions to be made, we began wondering how all of this would impact school and Gabi’s extracurricular passions. Would she have to repeat the seventh grade? Could she return to her old life, ever?

Early into Gabi’s first hospitalization, we were asked if we wanted to get connected with a social worker. We thought: “Why do we need a social worker? We can do all of this ourselves.” Looking back, it’s easy for us to chuckle about this now. Our first dose of reality hit us when we were struggling to complete her school district’s “homebound” documentation. Our social worker (and new best friend) Arlene Brown said “give me that,” and immediately removed that concern as she filed the necessary documents for the district herself.

Gabi’s child life specialist, Nicolle Bengston, helped explain medical procedures to Gabi and calmed many of her fears. Nicolle understood Gabi’s emotions, and anticipated her needs. For example, accessing Gabi’s portacath wasn’t always an easy feat, so Nicolle encouraged Gabi to be vocal. There, the transformation of a quiet, shy girl to a determined fighter and self-advocate began.

Gabi had successfully completed seven rounds of chemotherapy by March 2016, and it was now time for her tumor resection and reconstructive surgery. Gabi had already been through a lot – she experienced a rare reaction to one of her chemo drugs, Doxorubicin (a.k.a. Red Devil), and suffered from a severe case of hand-foot syndrome. Her hands looked and felt like they were severely burned. We had to start thinking outside of the box with the staff when it came to helping Gabi heal. This set the tone for her future recovery, and we began figuring out ways to positively navigate the side effects of chemo alongside rehabilitation from a radical surgery that removed five ribs and a slice of her diaphragm. The surgeons even made a special plate to cover her organs, and they pulled the latissimus dorsi muscle over it. Our plastic surgeon, Dr. Khechoyan, and general surgeon, Dr. Vasudevan, understood that Gabi intended to play soccer again, which helped them strategize a successful surgical outcome. Gabi’s recovery from surgery was extremely difficult and heartbreaking to watch, even more than the side effects of chemotherapy.

Each of our doctors were accommodating when it came to providing Gabi with the support needed for recuperation. This incorporated dietary recommendations, supplements and physical therapy. The eight-hour surgery caused movement restrictions on the right side of her body, which created a sizable amount of challenges since muscles atrophy quickly when not used. We refer to this time period as the “dark days.” This teenager, who I remembered distinctly as a spirited and tenacious 2-year-old, would have to now summon those qualities in order to push forward through the next four months of rehabilitation. We were able to incorporate physical therapy into our inpatient stays during the last phase of chemotherapy, which was helpful. We also continued physical therapy after she completed radiation, allowing Gabi to regain her upper body stability and strength.

Through Gabi’s steadfast resolve and incredible determination, she can now perform cartwheels and hold a handstand! It’s amazing.

Once her port was removed in the fall of 2016, Gabi was given the green light to return to the soccer field. She began training to rebuild her strength, stamina and coordination. She gradually started attending classes at the junior high school, one by one, adding them as she was physically ready.

Today, Gabi is wrapping up her freshman year of high school. She plays competitive club soccer for the Dynamo-Dash Youth Soccer Club, and also completed a full season on the junior varsity soccer team at her high school.

Gabi has definitely had to learn more effective ways to study and retain information after missing school for a good chunk of time. She uses Post-it® Notes to help remind her of simple tasks. Her school counselors and teachers have provided endless support to help ensure her academic success, and her friends and teammates have remained by her side as her biggest cheerleaders to this day.

We can’t help but marvel at Gabi’s quiet strength and grace, and she has taught us how to appreciate the little things in life and to be thankful for each day we’re given. Her mantra to “stay true to yourself” rings loud and clearly! Good friends and family will love and accept you, no matter what imperfections exist, physical or emotional. Gabi’s unwavering faith and lack of self-pity have shaped her into a strong teenager, exuding confidence and poise. She has become an advocate for childhood cancer awareness, and pushes for the funds needed to further drive cancer research to provide cures and support for families across the world.