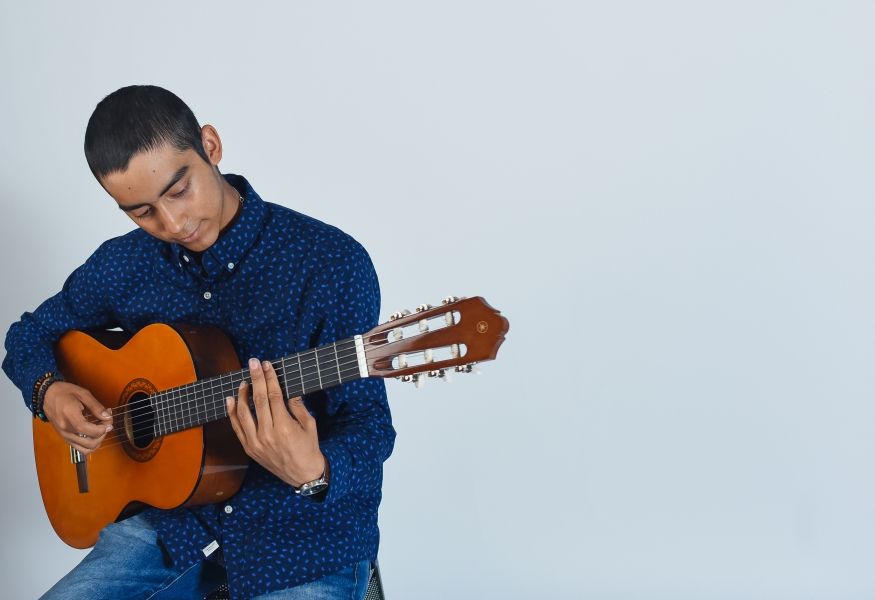 Hector, a dynamic 17-year-old mariachi member from Edinburg, Texas is a leader in and out of school. When he is not in the classroom, you can usually find him playing bass drums in the fall marching band season or competing with his mariachi teammates in the spring. He also performs at several concerts, so when Hector complained of a sore shoulder last fall, Hector’s mother, immediately thought it must be a result of his involvement in several band activities.

“He had no true symptoms, no exhaustion or weight loss. I just remember he would complain about shoulder pain. One morning he came down without his shirt and I noticed he was leaning to his right side. He didn't even notice he was leaning,” Alex recalled.

Hector’s mother, Alex, is a nurse. She immediately assessed Hector’s back and determined he had a really bad case of scoliosis.

“I called his pediatrician and tried to work with both of our busy schedules. At first, the doctors agreed he had scoliosis and sent him for an X-ray to confirm,” Alex said.

The X-ray results showed something completely different. Alex, once again in her nursing element, looked at Hector’s X-ray and immediately sensed something was off.

“I looked at the film and said what is this lump and why does his left side look like that? I asked all these questions and the team immediately reassured me they would have a radiologist look at the result. Right there I knew something was terribly wrong,” Alex recalled.

Hector’s pediatrician concluded he had pneumonia and sent him to the Emergency room right away.

“We got to the Emergency room and all the doctors were shocked that Hector, who walked in all by himself, is the one whose film they were looking at. I was shocked myself because this was the same boy playing football just days ago and is now here with a possible collapsed lung and a large mass. Then, just like in the movies, the doctors pull me aside to give me the news that would forever change our lives,” Alex lamented.

After a series of testing in the emergency room, the doctors found Hector’s test showed the possibility of cancer.

“The doctors told me and my husband that this is serious and suggested we get Hector whatever he wanted to eat because it was going to be rough from the next morning on,’” Alex said.

The doctors found a large mass that had pushed all of Hector’s chest cavity organs to his right and shifted his entire body. They also found a collapsed left lung with fluid around his lung.

“I could not believe everything they were saying and what was happening. I kept asking myself how I could have possibly missed this, how he seemed so fine and now his future looks like hospital stays and chemotherapy,” Alex recalled.

The team rushed Hector to the PICU right away to drain the fluid around his lungs and insert a chest tube while he was awake. Following a difficult night in the ICU, the family met with an oncologist the next day, Dr. Rodrigo Erana, who officially diagnosed Hector with non-Hodgkin's lymphoma.

“Everything moved so fast. Within an hour, they did a bone marrow aspiration without anesthesia because he could not have it. It was very hard to watch him go through all the testing, but Hector is so incredibly amazing and I had no clue what type of strength he had in him; I was amazed."

Alex sat there holding him while Hector had a lumbar puncture. He never flinched and went back to bed like nothing ever happened. Alex, on the other hand, recalled the difficult moment and said she was a complete mess sobbing for everything her son was going through.

Hector spent two weeks in the ICU where his oncologist connected him with Texas Children’s Vannie Cook Clinic to continue receiving treatment.

“Right after he was diagnosed with cancer, I thought we would have to go to Houston to receive treatment. I didn't know how I could possibly drive six hours every day from here to Houston and still manage to take care of my 4 other children. These thoughts were going through my head until Dr. Rodrigo Erana told us about Vannie Cook Children's Clinic. I immediately jumped on the opportunity and scheduled a tour."

Alex had no idea Vannie Cook Clinic, a Texas Children’s Cancer Center clinic in McAllen, Texas -- created to meet the needs of pediatric cancer patients in the Rio Grande Valley area, was only 15 minutes away from her.

“We got a call from the head nurse inviting us to tour the facility and to start treatment. From the moment we stepped in, everybody there already knew him and his story. It was a very personal experience and a no-brainier that Hector would receive his treatment at Vannie Cook. I was floored by how they made us feel at home and that eased my fears,” Alex recalled.

As for most cancer patients, the diagnosis changes everything. For Hector, his chemotherapy treatment meant he would soon become homebound and would have to be homeschooled.

“I was devastated and he was too. Here was this active high school junior, who is always very involved with extracurricular activates and especially his mariachi band, and now he has to miss out on all of the activities he loved and worked so hard for. It was a such a huge blow," Alex said.

Even in the midst of a seemingly hopeless situation, Alex found solace when she learned Hector could still continue school at home and would not be held back.

“There were weeks where it was bed to restroom to bed to restroom and that, perhaps, was the hardest time of our lives, but the staff at the clinic was there to comfort me. The fact that we were able to work with his instructors to turn his assignments in on the weekend was just amazing. Because we weren't traveling six hours back and forth to Houston made everything that much easier,” Alex said.

For the rest of his junior year, Hector continued to receive treatment from the clinic and soon began to show improvement. He was released to return to school earlier this fall, and although he ran into some challenges, he is back in full swing. In fact, he participated in summer marching band camp and is back to playing with the marching band in football games and looking forward to an eventful spring semester with his mariachi group.

“Hector is back 100%. He is the leader of the Armonia section of his Mariachi band and already competed several times this fall. It is crazy to think we began this journey in January and now everything is back to resembling normal,” Alex said joyfully.

Reflecting on their family’s unexpected journey with cancer, Alex is grateful for having the Vannie Cook Clinic close by and wants to advise all parents to “try to find a blessing in everything, even during troubling times.”

Alex's initial fear was she would have to move to Houston to receive treatment, not knowing there was an amazing option right in her own community. Now she tells parents in the valley who have children diagnosed with cancer about Vannie Cook and what the clinic did for her family.

"I trust they knew what they were doing and if we needed to go to Houston, they would’ve told us immediately. This place is top-notch and I am so grateful to every single one of the team members who helped our family move through this difficult time,” Alex said.