Children with Down syndrome should see an ENT specialist 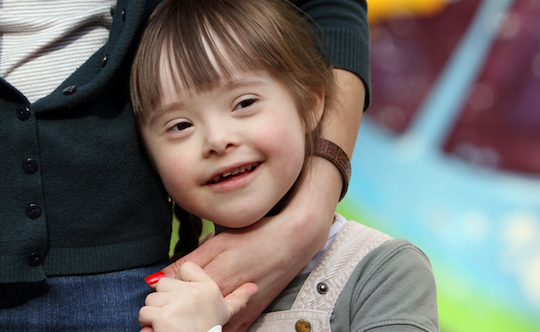 Occurring in 1 of 700 live births, Down syndrome remains the most common chromosome abnormality of children in the United States. Otolaryngologic, or ear, nose and throat (ENT), problems are common in children with Down syndrome.

Up to 50 percent of newborns with Down syndrome have stenotic, or narrow, ear canals. These narrowed canals predispose the child to earwax buildup and increased incidence of associated fluid in the middle ear. Children younger than 3 typically require more frequent ear cleaning, generally every three to four months, to remove wax and check for middle ear fluid which can alter hearing. If the middle ear fluid does not resolve on its own, children require pressure equalizer (PE) tube placement to remove the fluid, help the ear function well and improve hearing and speech development. It is common for Down syndrome patients to require multiple sets of PE tubes throughout their life.

Children with Down syndrome also have a higher rate of hearing loss, including conductive, sensorineural or mixed hearing loss. The American Academy of Pediatrics (AAP) suggests audiologic testing at birth, followed by testing every six months until age 3 and then annual testing. If hearing loss is noted on testing, amplification using hearing aids may be recommended to aid with hearing and speech development.

Fifty percent of children with Down syndrome will continue to have sleep obstruction after removal of tonsils and adenoids and will require further surgery or continuous positive airway pressure (CPAP) to help treat the sleep obstruction.

If OSA is left untreated, it may worsen over time and lead to problems with the heart and lungs, including pulmonary hypertension and congestive heart failure.

Children with Down syndrome are predisposed to chronic nasal congestion, nasal drainage and more frequent sinus infections, partly due to a smaller nose and nasal sinuses. The adenoids are found in the back of the nose and as they naturally grow can block the smaller nasal passage, increasing nasal congestion. Allergies can also worsen nasal congestion. Some children will require allergy testing to see what they are reacting to. Nasal saline rinses can help reduce nasal irritants and remove nasal crusting helping congestion and allowing children to breathe better from their nose.

Children with Down syndrome tend to have a smaller trachea and are at risk for recurrent croup. Infants can have noisy breathing due to collapsing of the larynx called laryngomalacia.

Otolaryngologic, or ENT, problems are common in children with Down syndrome. Routine ENT visits can help children with Down syndrome optimize their hearing, improve sleep and nasal congestion. To monitor these children more closely and provide more personal attention, Texas Children’s developed a multidisciplinary Down Syndrome Respiratory Clinic. This clinic is made up of ENT, pulmonology and nutrition. Regular visits with the genetics Downs Syndrome clinic is recommended to ensure Down syndrome patients are receiving appropriate care from all specialties. To schedule an appointment with the Down Syndrome Respiratory Clinic, call 832-822-3250.