Button batteries: The hidden dangers and what you can do to keep your kids safe
My personal journey with CHD sparked my interest in pursuing cardiovascular research
Give it a shot: Strategies for helping your child make a vaccine comfort plan
Physician Assistant Week: Caring for a young heart patient who beat the odds
What to pack in your child’s back-to-school lunchbox

January 8th, 2014 is a day I’ll never forget.  It’s the day we learned our unborn son, Aiden, only had half of his heart, a condition called Hypoplastic Left Heart Syndrome (HLHS). We already have a son, Noah, who at the time was about 19 months old.  He is perfectly healthy so while every parent prays for a healthy baby, we really had no reason to believe that anything really could go wrong with any of our babies.  January 8th stripped us of the naivety.  During a routine 20-week ultrasound in Shreveport, LA at Regional Perinatal Group, we were told that something was wrong with Aiden’s heart.  I don’t know that I’ll ever forget the details of that day such as the sonographer and I talking about green grapes during the scan or the look on my husband Philip’s face when he got to the doctor’s office.  No one ever expects this to happen to them or their child.  But there we were.  It was happening to us and to our baby.  We were told all about HLHS - the surgeries required, the statistics, the prognosis.  We were told to look into centers that could take care of Aiden because we would not be able to deliver him in our hometown.  We would have to be close to a hospital that could care for him immediately after birth. 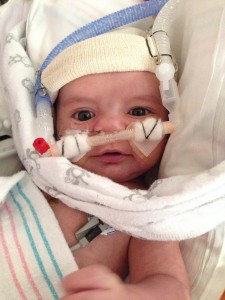 Philip and I left the doctor’s office in complete shock and in fear for our unborn baby’s life and future. After taking a few days to process all that we learned, we started researching surgical centers.  There were several that our doctors told us about.  When we learned that we had one of the top three cardiology and heart surgery centers four hours away in Houston at Texas Children’s Hospital, we knew that’s where we wanted to be.  We confirmed our choice with our local doctor and within days, I was on the phone with our amazing coordinator scheduling appointments with the Fetal Center at Texas Children’s Pavilion for Women. Our first visit to the Fetal Center was just shy of a month after our initial diagnosis.  We prayed that we would leave there with a much less severe diagnosis or even a miracle.  After we checked in, we were greeted by our sonographer who would be performing the fetal echocardiogram - an ultrasound of the baby’s heart while still in the womb.  Her name was Maggie.  One of those details we won’t forget.  She was very thorough, compassionate, and personable which when you are scared to death, is of great comfort.  During the scan we were also greeted with an incredibly warm and welcoming smile from Dr. Nancy Ayres.  She was the cardiologist we would be seeing for our prenatal visits.  Maggie and Dr. Ayres continued with the scan, “talking shop” throughout, but pausing to explain things when we had a question of what they were looking at. It truly is amazing the detail that can be seen on an echocardiogram of a baby’s heart in utero.  After the scan was over, Dr. Ayres took us into a private room to go over their findings and talk about what was to come for Aiden.  We learned that he most definitely had HLHS.  He would require at least three open heart surgeries - the first of which being in his first week of life - and the second by about five months old. 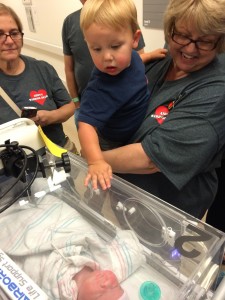 I would have to relocate to Houston in order to be close to Texas Children’s Hospital prior to delivery and remain there until the second open heart surgery.  Since our life is in Benton, Louisiana, my husband and other son would not be able to relocate to Houston with me so I would be moving to Houston alone with Aiden.  All of this was hard to take in. Not just hard - gut wrenching. My tiny precious baby would have his chest cut open in his first week of life. My loving son Noah would be away from his mommy a lot. I would be moving to Houston away from my husband - we had never really been apart for the last five years for more than a few days. But we knew it's what had to be done to give Aiden a chance. And we wanted him to have the best chance. We continued monthly visits with the Fetal Center. We spent hours looking at Aiden's heart.  We counted his fingers and toes, saw all of his hair, and watched him show off on the monitor. The doctors and sonographers made sure that they had the best idea of what they were working with to prepare for Aiden's arrival and birth. 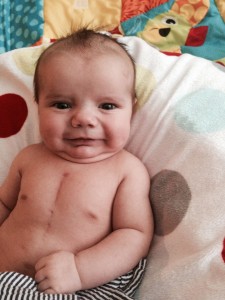 Aiden was born May, 19, 2014 at Texas Children's Pavilion for Women.  We were nervous because we knew Aiden was safe in the womb. Once he was born that's when things got complicated. But the care I received from my incredible OB Dr. Todd Ivey and all of the medical staff in the OR, we were still given a joyful birth experience.  I was able to watch the incredible NICU team assess Aiden by watching a monitor right next to me. I was able to touch and kiss Aiden before he was taken over to the Cardiovascular ICU in the West Tower of Texas Children's Hospital. Aiden had his first open heart surgery, the Norwood, at just four days old. The surgery wasn't easy, but he pulled through it and while it took him a little longer to recover from the surgery, he has done very well. We remained in Houston for another few months during the critical interstage period until he was ready for his second open heart surgery, the Glenn, on September 15, 2014 - just a few days shy of 4 months old. We were released to return back to our home in Louisiana October 3, 2014. To say it was a joyful homecoming is an understatement. We weren't sure that we would ever see that day so to be able to have our two boys at home together was the most amazing thing. Aiden still has at least one more surgery, but his heart will never be fixed. He will always only have half of a functioning heart, but with the advancements in medicine, we pray that he will have a long and wonderful life. We thank God every day for the blessings He has given us and we are forever grateful to the incredible doctors, nurses, and staff at Texas Children's Hospital. The care we received prenatally as well as after Aiden's birth was exceptional and made all of the difference. Thank you! To learn more about Texas Children's Heart Center, visit here.