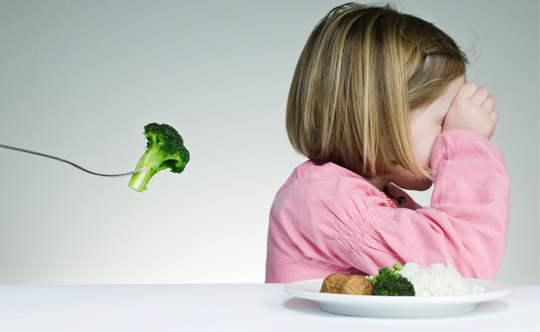 Like many other behaviors, preschoolers will often refuse parental commands to “eat.” If asking your child to try new foods results in family arguments, child tantrums, or you’re going to great lengths to get your child to eat (moms and dads stuck holding your 3 year old’s fork for him, you know who you are!) consider using the behavioral plan below: First off, let’s define the target goals of the plan:

Step 1: Set clear and reasonable expectations for what your child needs to do:

At the start of the meal, clearly tell your child what you expect him or her to eat. Make sure the serving of the target food is very small to start in order to promote child success. A rule of behavior change is to start super small and gradually build bigger. An example expectation could be: “Johnny, today I’m giving you two green beans to try (the new food he has refused in the past), along with the peanut butter sandwich I know you love.”

This tip ties to one of the most basic laws of psychology - the best way to build a new behavior such as trying new foods is to reward it immediately when it happens. We won’t need to reward the behavior for the rest of time, just until it gets going as a natural habit. So please pick a highly motivating positive consequence that you are able to give immediately after the food is eaten. For example: “Johnny, if you try the green beans today by eating all two, THEN you can have the privilege of___________(suggestions: a television show, 10 minutes of video-game time, the chance to play for 20 minutes with a “special toy” that is otherwise withheld in the cupboard). A note to parents: In the world of preschoolers, immediately means IMMEDIATELY. If you want your motivator to actually reinforce the behavior of eating, try to give it within five minutes of the child completing the task.

Step 3: Use your attention wisely:

Parental attention is a strong reward for child behavior – for better or worse. Parents often inadvertently train kids to tantrum by rewarding these problem behaviors with attention. For every parent who has ever tried to rationalize with kids when they complain about food, negotiate with them about the amount they need to eat, or try to poke the fork into their mouths for them if they refuse to do it themselves (and we’ve all been there!) it’s important to recognize that these actions are attention for our kids, and are likely training more of the same bad behavior. To better understand this concept, think of every look you give your child and every word you say to him as shining a light bulb of attention on him/her. We want your light bulb of attention to shine, shine, shine on kids when they are doing something right during meal-time, but to switch off on them immediately as soon as they start to misbehave. Kids love attention! This is the most powerful reward we have – so let’s make sure we give it to behaviors that we actually want to reward. So, when your child attempts to tantrum/argue during meal-times at home, calmly and consistently ignore these behaviors (turn your body, speak to a sibling or another adult at the table). In contrast, when your child (or someone else at the table) shows positive behaviors (such as calming down after crying, sitting politely or trying even a small bite), give high levels of positive attention. Shift that light-bulb of attention towards or away from your child moment-to-moment throughout the meal depending upon whether they are showing positive or negative attention-seeking behaviors. A note for parents: Remember that it is normal for your child to have large tantrums at the start of this behavior plan while he or she tests your ability to ignore him – as long as they are not destructive, continue to calmly ignore whining or tantrums and return to giving positive attention at the first sign of calming down. If he/she is destructive during a meal-time tantrum, discipline as you normally would (time-out can be good for this). Children generally stop tantrums when they learn that they never get your attention for it.

Step 4: Stick to your word:

If your child tries the new food that you set out then make sure that he or she gets the privilege that comes next. However, if after a reasonable time your child has not eaten the new food (and use of timers on your stove or phone can be good for this), then calmly tell him he has lost the chance to have access to the privilege. “Johnny, the 20-minute timer rang. You did not eat the three green beans that you needed to eat in order to get the TV time, so no TV tonight.”

Step 5: Hold yourself back from short-order cooking!

You might worry that your child will be hungry if your child did not eat the food you gave him, and want to fix him something else. Dear loving and concerned parent - DO NOT prepare him something else to eat, as this rewards his food refusal. Instead, calmly let your child know that food will be available at the next scheduled meal. For most kids, experiencing hunger because they did not eat what you provided is a good learning lesson, and increases the chance that they will be motivated to eat what you provide at the next meal. Note: if you have concerns about significantly low weight for your child, talk to your pediatrician about this. He or she can let you know if your child falls into the small category of kids that would require meal supplements if they refuse food.

Step 6: Keep on keeping on:

Expect failure to start (that’s normal) and stick to the strategies described above, as this behavior plan takes a week to two weeks for parents to start to see success. If you do not begin to see small signs of success within one to two weeks, talk to your doctor or behavioral health therapist, as additional consult may be needed. This blog was originally published in the National Organization of Mother's of Twins Club, Inc. monthly newsletter.