Texas Children’s and Be The Match partner to hold “Cheek Week” event
Monkeys Have Pulmonary Hypertension, Too
Food Allergy: The Layers of Protection
Reducing the Risk of Children Developing Cancer Later in Life
Does my child need to be screened for cancer?
Department
Hematology Center
Sickle Cell and Thalassemia Program
Cancer and Hematology Center 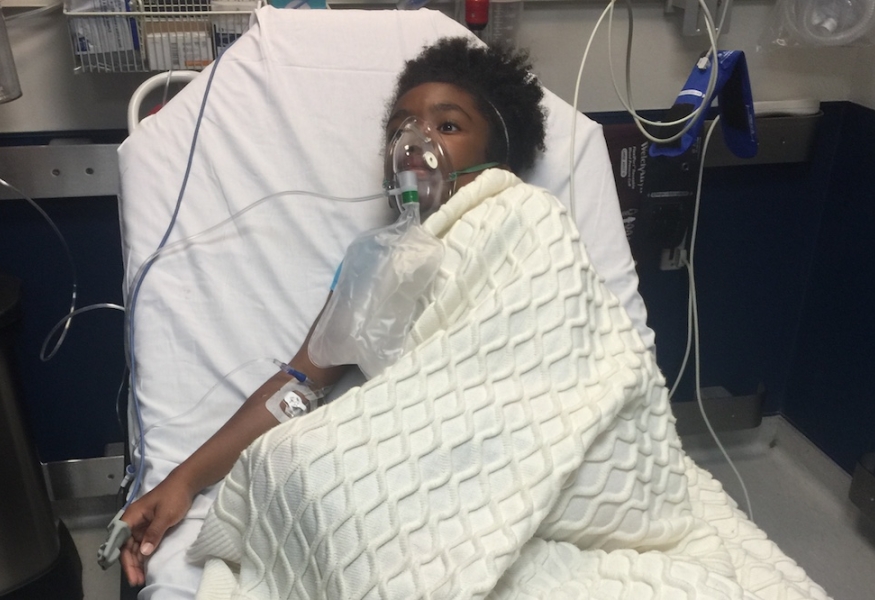 Do you know what SCD is? Let me explain before we get started. To put it simply, SCD is a group of inherited disorders where the red blood cells are sickle-shaped and broken down. SCD can’t be developed, and it’s not contagious. These cells are inflexible and can easily cause clotting. This can bring pain and complications, like loss of oxygen. To note, sickle cell trait (SCT) is a less aggressive condition in which a child inherits the sickle cell gene mutation from a parent. Those with SCT usually don’t experience SCD symptoms throughout their lifetime. If two parents with SCT have a child, there’s a 50 percent chance their child will have SCT, 25 percent chance for SCD and 25 percent chance of normalcy. I was the first 25 percent chance, and I got SCD.

I can recall early memories of being at Texas Children’s in a playroom when I was 4 or 5 years old. This playroom had some pretty cool things – at least for a 4 year old. I remember playing with Toy Story toys, reading books, watching a movie and painting a picture with my mom. I was probably just figuring out how being in the hospital sucked, but I loved that playroom regardless. Whenever I was strong enough to go, I went.

Of course – where there are ups, there will always be downs. Obviously, SCD pain hurts really badly. It can occur at any time, but triggering factors include excessive exercise, which limits my ability to participate in a lot of things. SCD also impeded my social life. It’s not really fun to take medicine in front of friends at sleepovers. I’ve tried countless techniques to avoid this, including sneaking my medicine bag into the bathroom while others were distracted or waiting until everyone was sleeping (usually around 3 a.m.) to take my medicine. I’ve also had to turn down invitations to countless pool parties because the pool temperature was usually never warm enough for me. When I did go, I was almost always in the hot tub while everyone else played in the pool. When my family moved into a house with a pool of our own, my friends often complained about the water temperature and typically didn’t last more than five minutes in the hot tub. I’m able to shrug this off most of the time, but sometimes you just can’t help but notice how different you are from everybody else.

As you can imagine, SCD has definitely taken its toll on me, but there have only been two instances of major crisis I’ve experienced in my life. I know these will stick with me forever.

In July 2016, my family went on vacation. My dad, his friend and another man retreated to another house for a fantasy football competition, and I was left in my room. I refused to play with the other kids, since I was 10 and the rest of them were boys under the age of 6. We were in New York, and it was pretty chilly outside. We had a huge pool in the backyard, and it felt pretty warm. I knew it probably wasn’t the best idea at the time, but I decided to get in after my parents gave me permission to do so. This later resulted in arm pain. I didn’t think much of it at first, until it didn’t go away.

We rushed to a local emergency room in the middle of the night, where I received morphine and got sleepy – the normal drill. I got some sleep when we returned home early in the morning. We flew out the next day. It really hurt to move my arm, but I tried not to think much about it. I rested and took some medications over the next few days at home, but my arm pain didn’t go away. We eventually made our way to Texas Children’s, where I ended up staying inpatient for three or four days. We later learned I had something called avascular necrosis (AVN) in my shoulder, which meant bone tissue death from loss of blood. What I didn’t expect was just how long it would take me to recover.

I started physical therapy to help regain arm movement, and I was still on pain medications when I went to visit my best friend in Tennessee later that month. I couldn’t use my arm very well, and had to fly back home early because my arm was hurting too much. When I started school in late August, I was still in physical therapy and still had trouble moving my arm. I can’t remember exactly, but I think it probably took until at least October for me to regain full arm movement again. That was my shortest episode yet.

My second story hasn’t exactly ended yet. It was the beginning of sixth grade, and I was getting ready for competition season in gymnastics. My parents were starting to suggest quitting gymnastics since I was sick often from the excessive activity, adding how junior high was going to be a lot of change and hard work in itself. Being my stubborn self, I decided to stay in gymnastics. After the season started, my hip began to hurt. My previous AVN incident happened a year earlier, and I didn’t even consider the same thing happening again in my hip.

I was experiencing a lot of pain during the season, and my overall success rate at competitions was pretty low. My hip began hurting for probably a month or so, and it got to a point where I couldn’t compete anymore. I came home hurting most of the time, and I had to stay on hydrocodone and morphine. I wasn’t performing well in school, either. I barely managed to keep all A’s because I was missing so much school from being sick. Don’t get me wrong – I had a lot of good times and great practices, but gymnastics could only last for so long before it got to be too much. One day, my back started hurting not even five minutes into practice. When my parents picked me up, they decided this was the last straw. I was done with gymnastics.

In the days approaching Halloween, we went to get an X-ray of my hip. I thought they might find a minor clot, but a trip to orthopedics revealed I had AVN in my hip. Dr. Scott Rosenfeld, my new doctor, suggested some different treatment options, but we ended up doing a core decompression surgery. I got my crutches a week before the surgery, and I’ve had them ever since. I would be on crutches until my hip significantly regained bone, which I originally thought might take three or four months. Little did I know it would take much, much longer.

When I first went to school with my crutches, classmates bombarded me. But they got used to it after a few days. I was on crutches for my birthday, but my mom blinged them out – they looked pretty cool. After winter break, people began to wonder why I wasn’t off crutches yet. I honestly wondered the same thing. I’m sure people started rumors about me faking my pain and coming up with a crazy story just to get out of P.E. Sometimes, people don’t think before they talk. Why would I miss out on so many activities with my friends for months just to get out of P.E. for 50 minutes every day? Eventually, summer came around. I went to a few camps, and summer was over before I knew it. Now I’m back to school, in seventh grade – still on crutches. People asked me why I was still on crutches, and again, I didn’t really have a good answer. I go to the doctor time and time again, and I keep hearing I’m not ready to walk. Not yet, maybe in a few months. I’m still not ready to walk. Well, I’m ready, but my hip isn’t.

As a wise person once said: “Everyone wants happiness, nobody wants pain, but you can’t have a rainbow without a little rain.” So when my hip is ready, I’ll be ready. Until then, I guess I’ll just have to be great at everything else.

If you’re interested in supporting your local SCD community, consider buying a t-shirt from Supporting Our Sicklers (S.O.S.) Parent & Guardian Group. Funds raised will go towards educational programs and assistance initiatives for families in the Greater Houston area. To purchase, click here.

September is National Sickle Cell Awareness Month, and our pediatric SCD community would benefit greatly from focused attention on the need for continued research and treatment. Our children experience SCD’s impact throughout their lives, and their greatest desire is to feel just as normal as they appear from the outside looking in.