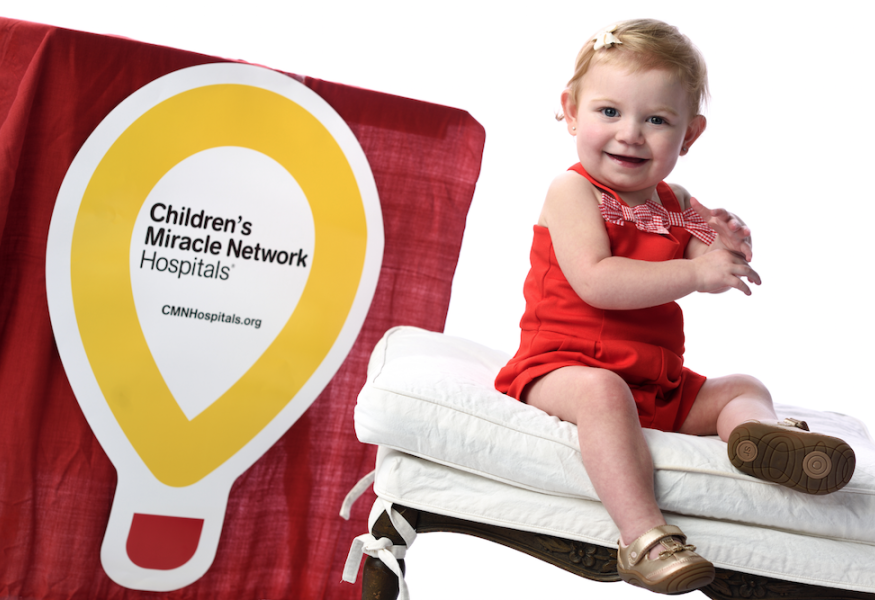 Every year, each hospital affiliated with the Children’s Miracle Network Hospitals identifies a “champion” in their local community to serve as the face for the children they treat. These ambassadors spend the year advocating for the charitable need of children’s hospitals across the country. Here’s the story of our champion:

Mandi and Kyle, expecting their second child together, arrived promptly to their appointment for a 20-week ultrasound. They had just learned of their baby’s two-vessel umbilical cord – a suspicious red flag that called for the additional imaging.

The specialist seemed to focus intently on the baby’s heart during the ultrasound. “I think something is wrong,” he finally told them, much to their dismay.

They were referred to Texas Children’s Pavilion for Women for a fetal echocardiogram, which confirmed their baby indeed possessed a rare, complex congenital heart defect: hypoplastic left heart syndrome (HLHS).

HLHS is a malformation of the left side of the heart. The organ’s mitral valve, left ventricle and aortic valve are too small, compromising the left side’s ability to effectively pump blood to the rest of the body.

The baby’s heart defect wasn’t severe enough to warrant in-utero treatment; however, the pregnancy was monitored closely until Mandi delivered daughter Leigh Ann at the Pavilion for Women on March 9, 2017.

This surgery, alongside its successors, is incredibly risky. Imagine operating on a newborn baby’s heart – the heart itself and the left ventricle are comparable in size to a large grape and a pea, respectively.

“The first operation is definitely the most critical,” Mandi said. “If they make it to the second operation, they’re on a good path.”

Fortunately, Leigh Ann did just that. The second surgery – the Glenn procedure – took place on July 11, 2017, at Texas Children’s.

Leigh Ann’s road to recovery was lengthy; her care team constantly observed her oxygen level, fluid balance and electrolytes. She was finally discharged to go home after seven long months in intensive care.

“We were excited to go home, but the staff became a family to us,” Mandi said. “Texas Children’s is like our second home.”

While they were elated to be out of the hospital, the young couple quickly learned just how difficult caring for a child with a major health condition is. Their marriage and faith were tested as a result, and Mandi had to quit her job to stay at home with the baby. Leigh Ann’s special little heart took a toll on the family’s finances and their general outlook on life.

“Our world revolved around caring for our daughter, so we lost some friends,” recalls Mandi. “There was just very little time for a social life outside of the hospital visits and therapy appointments.”

However, the family managed to gain several new friends throughout the journey – many of which were other parents from Texas Children’s who could relate to their personal struggles.

“When Leigh Ann turned one, she seriously turned into the sassiest, cutest little girl,” Mandi said. “She talks all of the time and loves to get attention from her big brother. She’s getting stronger and living her best life!”

Leigh Ann is still making strides at home – she’s a healthy young toddler for the most part. She maintains a good oxygen level and continues to improve developmentally.

She just celebrated her second birthday, too! Completely mouth-fed at this point, Leigh Ann only receives medication throughout the day from a G-tube. She loves to eat just about anything – except vegetables!

Leigh Ann will eventually require the third and final operation – the Fontan procedure – within the next year or so. This operation comes with many risks, including the possibility of organ failure.

However, the prognosis is positive. “She’s doing quite well, and we’re optimistic that she’ll tolerate the Fontan,” cardiologist Dr. William B. Kyle said.

“We’ll only consider a heart transplant should her native heart fail irreversibly. For example, this could happen if the strength of her right ventricular contraction becomes very weak despite maximal therapy,” explains Dr. Kyle.

“Thankfully, this isn’t the case for Leigh Ann and hopefully won’t be a consideration until much farther down the road.”

The oldest living person with HLHS is their 30s. Ultimately, the Cribbs hope and pray that Leigh Ann has a long life ahead of her.