Young Woman’s Battle With Autoimmune Disease Inspires her to be a Voice for Others
Doing What He Loves To Do
Standing Tall: Toddler Takes First Steps While Fighting Cancer
Young Cancer Patient Runs Past Milestones at Texas Children’s Hospital
Princess-Loving Patient Overcomes Cancer as Thriving Preschooler
Department
Sickle Cell and Thalassemia Program
Psychology

How to talk to kids about what happened to George Floyd 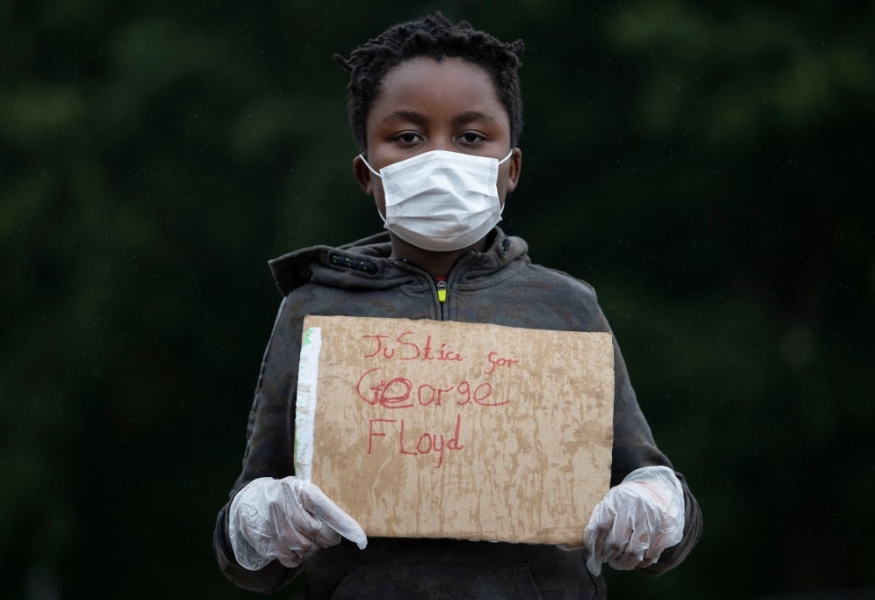 As the news of George Floyd’s tragic killing shook his hometown of Houston, the country and the world, many parents began to wonder how and if they would – or should – speak about his murder to their children. Thousands began protesting the senseless event. Media images of his killing dominated the news and parents found themselves at a loss for how to begin a conversation about what happens all too often to black people in the hands of the police. While the murder of George Floyd and broader topics of race relations in America are difficult to discuss, it is important that the discussion begins early and occurs often. George Floyd’s murder is not a topic that should be avoided within your family.

Explain what they’re seeing … and sensing

Young children are aware of the tension in the air while tweens and teens will ask openly about it. The images of George Floyd’s murder on the street in Minneapolis, or those of him painted on store fronts around the country, are tangible and frequent. By now, most children know George Floyd’s name and understand that he died. When your children ask questions about him, do not attempt to quiet them or change the subject. Simply discuss it. Describe the images that children are seeing in simple language and ask about their understanding. Label the feelings witnessed in the images and what they evoke for you as an adult. Your children are looking to you to make sense of these images and they will model your behavior.

Even young children understand the concept of fairness. When children ask about the images of protesters, rioters and looters, start with explaining that in the United States, we have a right to freedom of speech and these people are expressing their fear and sadness in support of black people who are systematically treated unfairly. Explain that the news reports indicate the crowds are comprised of people who feel passionately about racial injustice and those who are present to take advantage of the situation by destruction of property and taking items from stores when the windows and doors are broken.

If you are uncertain about what your child knows about George Floyd, take the opportunity to engage them in conversation. Explain that he was an African-American man murdered while in police custody. Children may ask how or why his death happened. If asked for more details, explain that his death occurred when the police officers put pressure on his neck and restrained his body. Acknowledge that watching the images of his murder can elicit an emotional response of fear, sadness and anger. And, note that these feelings can linger. When older children ask, explain that these types of murders happen more often to black males and that people know this is unfair and want things to change.

Talk about it – even with young children

Children are never too young to begin difficult conversations, whether that’s about race, skin color, body development, etc. It is to a parent’s advantage to begin practicing these difficult conversations before a child can even speak by using resources such as books and television shows. Parents should acknowledge that these conversations may be difficult because they bring up different feelings, and it is easy to stop talking in an effort to avoid these feelings.  Model for your child that although something is difficult to talk about, it is important, necessary and there are resources to help.

This summer, make it a point to obtain resources that will help with the conversation about racial tension in America. Make a list with your family of books you will each read and discuss. Below is a list of suggestions:

Additionally, viewing documentaries with middle and high school students can expand their knowledge and understanding of the complex history of race, racism and social injustice in the United States. Parents may consider co-viewing documentaries such as 13th (directed by Ava Duvernay; Netflix, 2016), Central Park Five (directed by Ken Burns; Prime Video, 2013) and Eyes on the Prize I and II (Blackside Productions; PBS, 1987).

Earlier this week, George Floyd was laid to rest in his hometown of Houston – our shared hometown. We have an obligation to talk about, champion and celebrate George Floyd for his life and the movement that was ignited by his death.

If you have difficulty finding the words to begin the conversation about George Floyd’s murder, begin by thinking of the type of person you want your child to become. Is that someone who is open-minded and fair? Someone who is friendly and thoughtful? Someone who is not afraid to participate in difficult conversations? Work toward developing him or her into this person by engaging him or her in a discussion about George Floyd’s murder. Understanding will not happen overnight, but it is easily one of the most important lessons you will teach as a parent.