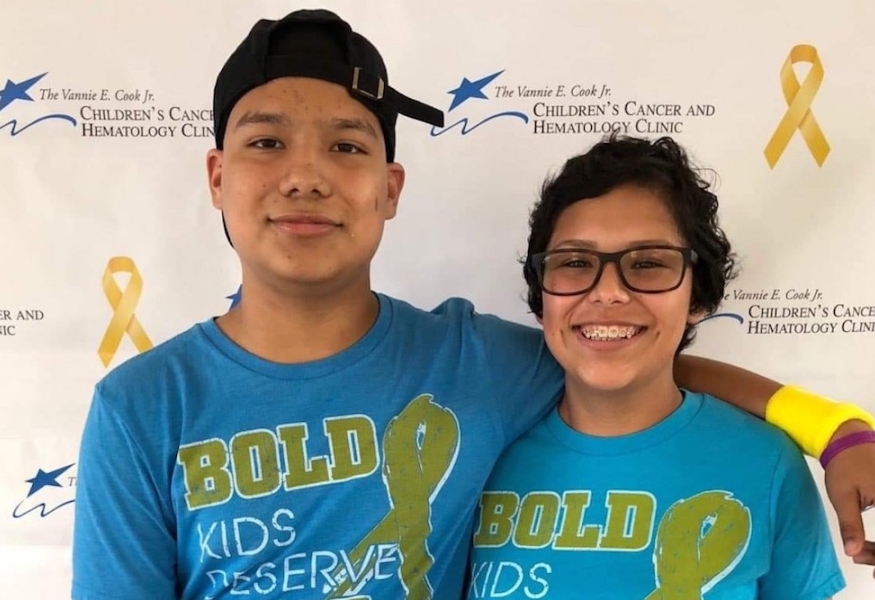 When I was 17 years old and preparing to start my senior year of high school, I was excited for all it had to offer – football games, homecoming, prom and graduation. Instead, I was blindsided by a diagnosis for stage IV Hodgkin’s lymphoma.

I found myself suddenly fighting for my life, as if time stopped. I couldn’t understand why it was all happening, but it didn’t matter because I was already facing challenges I wasn’t prepared for. Everything happened so quickly from one day to the next, and I was getting ready for my first round of chemotherapy before I knew it.

I remember lying in my hospital bed as different medications were administered, not knowing if my body was going to react well to the treatment. I read about the potential side effects of chemotherapy beforehand, and one stood out the most to me – fertility. I never even thought about my fertility until I was faced with the possibility of not being able to conceive a child. It was initially the last thing on my mind as a teenager, but the thought of not being a mother hurt. I also knew part of the treatment required both chemotherapy and radiation, which would put me at risk for developing other cancers in the near future. I didn’t have a choice, though. This meant saving my life.

I was weak and exhausted as I went home after my first treatment. By the second round of chemotherapy, my hair started to fall out. I knew it was going to happen, but I kept telling myself: “It’s just hair, it’ll grow back.” But we often underestimate how much power our hair brings to our identities. This was one of my weakest moments. I would cry every time I brushed my hair because it was coming out in chunks. It was a daily reminder that cancer was real. I eventually decided to take control. I wouldn’t let cancer take anything else from me. I’m me, with or without my hair. I shaved what was left of it, only because it meant I wasn’t going to allow cancer to win. I did it myself, and I’ve never felt more empowered.

This moment didn’t last very long. Every time I went out in public, people would whisper to each other, wondering if I was a boy or a girl. They would stare and mumble as they walked by, as if I was contagious. I didn’t want it to affect me, but I couldn’t help it. It brought down my self-esteem. Shortly after, I lost my eyelashes and eyebrows. I felt ugly, and I fell into a state of depression. I was already fighting for my life – I didn’t have the strength to fight this mental battle. I knew it wasn’t me, though, and that I needed to change my thoughts. It’s true when they say your thoughts create your reality.

I had a week to rest after my second round of chemotherapy, but scans were done in the meantime. The week felt long to me at first because I was anxious to know if the treatments were working. Soon after, I became very ill and was rushed to the hospital, where I spent seven days inpatient receiving antibiotics and transfusions for red blood cells, platelets and plasma. I was incredibly weak. I’ll never forget my stay in the hospital because, in those moments, the reality of having cancer struck me at its worst.

I couldn’t get out of bed – I had no strength left to muster. Every single bone in my body ached. I was very pale, and I lost so much weight that I could see my bones through my skin. I truly thought I was dying. I cried to my mom, telling her I just didn’t want the cancer inside of me anymore. My body was giving up on me, and I didn’t know what to do. I kept telling myself I was strong enough, yet I didn’t know how – or if – I was going to make it through the next few days.

I remember being told, “This is the easy cancer,” back when I was diagnosed with Hodgkin’s lymphoma. Let me tell you one ting – there’s nothing easy about it. I was so scared because I thought this was going to be the end of my life, but all I could do in the moment was stay strong. No matter how tough you are, it really doesn’t matter because fighting is the only choice you have. I made it through that week in the hospital and was sent home after receiving my third round of chemotherapy. It was working – my tumors were shrinking. I was told I was a fast responder.

We didn’t have to travel very far for treatment at the Vannie Cook Children’s Clinic, which definitely made life easier for my family as I fought through my condition. I often felt miserable after my treatments, which would’ve been very difficult to manage if we were traveling back and forth between the Rio Grande Valley and Houston or San Antonio.

I kept fighting for my life through my fourth and fifth rounds of chemotherapy without actually being able to live it. My friends were taking graduation pictures, enjoying every football game and going to homecoming. I was happy for them, but I couldn’t help but feel angry because of the situation I was in. Life kept going though, forgetting about me, as I remained stuck in a reality I didn’t understand and still to this day don’t.

Cancer is real, and it takes so much more than I have to share with you all in this entry. But through it all – the fear, depression and anger – I learned to appreciate life for what truly matters, which is life itself. I learned not to worry about what I was missing at the time, to keep fighting so life wouldn’t miss me. I survived, and I’m so grateful each day to be able to say those exact words: “I survived.”

I woke up on a Friday morning excited for the road trip my family had planned for the day. My bags were packed, and I made sure my room was clean. I was ready to go. We started packing my mom’s bags once she got home from work, when she noticed a lump on my neck. She was definitely concerned about it, as any mother should be. But as the mother of a Hodgkin’s lymphoma survivor (my sister, Ana) she was terrified this could be the same thing. My mom took me to our local doctor, who admitted me to the hospital because the lump was swelling.

I’m frustrated at this point because we’re not on our road trip and I’m stuck in this hospital. I was placed in a room and the doctors started running tests. The lump on my neck was possibly from an infection. It could also be lymphoma. “There’s no way it’s lymphoma,” I said in my head. “My sister just beat this thing. It can’t be in me too.”

I had a CT scan done later in the day, but I was waiting for the doctors to come in to tell me nothing was wrong and we could go home. But that’s not how it went. My mom and I were cracking jokes when the doctor entered the room. “I have some news. We found lymphoma in your scans.”

I froze. My entire body was paralyzed with fear. I saw the doctor’s lips moving, but couldn’t hear anything aside from a slight ringing in my ears. I never thought anyone’s smile could disappear so quickly until I turned and faced my mom. She was trying to be strong for me by holding back tears, and I was doing the same for her. I’m not really one to share my emotions, but I just broke down when the doctors cleared the room. My mom just held me in her arms. I remember questioning God, which I know isn’t the best thing to do, but it was my honest reaction. I was just mad and hurt and I didn’t understand. Why me? My mom started calling family members to the hospital. I knew if they saw me crying, they’d start crying too. I hopped in the shower and let out all my emotions while I was in there. I hated this. I hoped it was all just a really vivid nightmare and that I would wake up to everything being OK.

The following days were filled with doctor’s appointments, biopsies and scans. I was then diagnosed formally with stage IV Hodgkin’s lymphoma, the exact same diagnosis as my sister. I was at a very dark place at the time. I wasn’t eating and I couldn’t sleep. I remember staring at the ceiling, wondering why this disease kept messing with my family. I then remembered my sister got through this, and so could I.

It all happened so quickly, and I was getting my first round of chemotherapy before I knew it. I was scared and nervous. I even listened to rock songs on the ride to the hospital, trying to prepare myself. Nothing could’ve prepared me for something like chemotherapy. There was a big syringe filled with red liquid, inserted right into a vein leading to my heart. It wasn’t a good feeling at all, but I come from a line of fighters. I knew I couldn’t let the pressure get to me.

The side effects started hitting me, and I faced lots of long days followed by longer nights. I was losing my hair. I had to explain to my friends why I couldn’t hang out with them as much, and I hated everything about what was happening in my life. It honestly got to the point where I asked myself, “How sad would my family be if I stopped treatment and just let nature run it’s course?” I hated feeling the way I felt, so I prayed and tried my best to think positively in times like these.

After two rounds of chemotherapy, I had another set of scans done and they came out great. There was no active cancer in my PET scans, and my tumors were shrinking. It was a good feeling, knowing all of this pain I was going through wasn’t for nothing. I just recently finished chemotherapy and should be starting radiation shortly. Even though these treatments are tough on my body, I’m trying my best to get through them and finish strong.

I never imagined fighting for my life at the age of 16, especially right after my sister fought for hers. But it taught me how to appreciate the little things in life, like family and friends. I even get excited when I’m able to climb out of my bed in the morning. It’s just unfortunate that it took something like cancer to get me to do that. Even though this whole situation knocks me down sometimes, I get right back up, because I know the pain I feel today will be the strength I feel tomorrow.