The Delta variant: What parents need to know as children head back to school
Heat strokes, cramping and sunburns: How to stay safe in the summer heat
A life-changing opportunity to help a patient with strabismus improve eye alignment
Swimmer’s ear: How to keep ear infections at bay this summer
Diabetes research: Reflecting on our past successes to create brighter futures 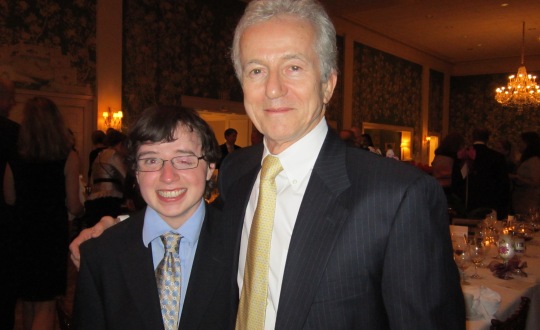 You bring home a healthy newborn, whom you vaccinate against childhood illnesses. You maintain a regular appointment schedule with your pediatrician. You install the latest car seat and baby-proof your home so thoroughly that even you can’t get into some of the cupboards.

And then, despite all the steps you’ve taken to safeguard your child, life throws you a curveball.

That’s what happened when our son Brent Adams was diagnosed with a rare disease called Langerhans cell histiocytosis at the age of 17 months. For the rest of his preschool and elementary years, Brent was a patient at Texas Children’s Cancer Center under the care of Dr. Kenneth McClain, who is an internationally recognized expert on histiocytic disorders.

Doctors don’t know what causes histiocytosis and there is no cure — just accepted treatments. Because it occurs so infrequently, striking just 5 in 1 million children, few pediatricians ever encounter a patient with the disease. That means diagnosis is often delayed until the case is far more serious and requires heavier doses of chemotherapy, radiation and other types of treatment.

Histiocytosis occurs with the over-production of 2 types of white blood cells that normally fight infections. Its manifestations range from isolated lesions of the skin and bones to a systemic disease that affects organs. Although it is not clinically considered cancer, histiocytosis is treated by hematologists/oncologists because chemotherapy is a front-line therapy. The Histiocyte Society — an international organization of physicians and nurses researching and fighting histiocytosis and related diseases — has established protocols that are recognized as the most authoritative guide to treating these disorders. But because the number of patients remains small, doctors can’t predict how any affected child will fare or exactly what it will take to get the disease under control.

About 40% of histiocytosis patients have the disease in the pituitary gland located in the middle of the base of the brain. This causes diabetes insipidus, a hormonal inability to regulate the body’s water balance. Not only did Brent have pituitary gland involvement, the disease — which began in his skin and spread to the bones of his face and head — actually infiltrated the ventricles of his brain. This is an extremely rare and potentially devastating complication. Nearly all patients with similar central nervous system lesions experience progressive neurological deterioration and are significantly disabled.

Over the course of 8 years, McClain exhausted all of the accepted chemotherapies in his attempt to rein in Brent’s brain disease. Without other options, he turned to a chemotherapy that had been used in patients with bone disease but had never been tested against central nervous system involvement.

Coupled with low-dose, highly targeted “peacock” radiation, this innovation helped McClain halt the disease, which now lies dormant or “asleep” in Brent’s brain more than 10 years after it was administered. Brent has not needed any treatment since then and has no neurological impairment. McClain’s treatment is now the accepted protocol for children with histiocytosis in the brain and central nervous system.

Unfortunately, despite this breakthrough, doctors aren’t much closer to discovering what causes histiocytosis or to discovering its cure. Histiocytosis is considered an “orphan disease,” meaning that it affects too few people to warrant federal funding for research. Without funding, doctors have very few options on treating rare diseases like histiocytosis.

The majority of the money spent on research comes from private donations to the Histiocytosis Association Research Program, which was created to identify and fund the most important and promising research initiatives leading to more effective treatments and, ultimately, a cure, and to emerging organizations such as the Histio Cure Foundation.

According to the National Organization for Rare Disorders, children with rare pediatric disorders like Brent’s make up the vast majority of the 30 million Americans who suffer from rare diseases (a rare disease is defined as one that affects fewer than 200,000 individuals).

On Feb. 29, 2012, our family joined others across the nation in support of Rare Disease Day. Our hope is that maybe one day, with more awareness, knowledge and funding, rare “orphan diseases” will be renamed “cured.”