In a future post, I will discuss sickle cell trait and the athlete. 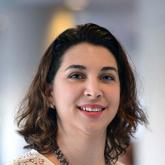