40 Years Since The Birth Of The Bubble Boy

Today marks a very special day for me, Texas Children's and the whole Houston community. Forty years ago, a boy was born whose life and death would impact millions of lives throughout the world. 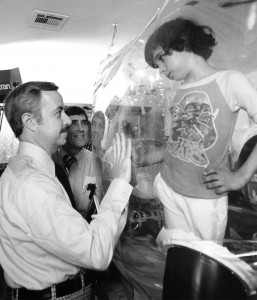 David Vetter was born on September 21, 1971 without an immune system and was immediately placed into a sterile plastic isolation bubble to protect him from germs of the outside world. Until David's time, most children with immune deficiencies did not live to see their first birthday, but the plastic bubble allowed David to make it to his 12th birthday.

I had the honor of being David's physician for five years and continue to have the privilege of witnessing other children living today because of David's contribution.

I will always remember the first time that I met David. He immediately put his arms in the gloves extending from his plastic isolator system to shake my hand and began quizzing me

to make sure I understood that he was special and was competent enough to care for him. At 7 years old, David was a very bright young man who had a vocabulary as advanced as some of my peers and enjoyed learning. He was very brave and courageous handling his situation and fighting germs and brought a great sense of humor that lightened up the room.

David's life and death gave us insight into understanding immune systems that has led research in AIDS, cancer and other diseases and illnesses involving the immune system. Because of David, thousands of other children with immune-specific deficiencies are living today and the lives of millions around the world with other diseases have been improved.

After David's death, Dr. Ralph D. Feigin and I established the David Center at Texas Children's which is dedicated to research, diagnosis and treatment of immune deficiencies and has used David's cells to give fresh hope to numerous lives. Today, we no longer have to use a bubble for children with immune deficiencies and can provide a cure to enable them to live healthy lives.

David was an incredible young man whose legacy has contributed to an even greater accomplishment and my life and has certainly been changed because of David and his family.