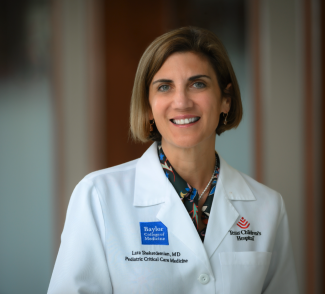 During her tenure at the nation’s largest children’s hospital, she has participated in every aspect of administration and led growth in all areas, expanding critical care services from 88 beds on one campus to 172 over three campuses, most recently with the opening of the award-winning Lester and Sue Smith Legacy Tower. She is committed to further expanding and solidifying Texas Children’s already substantial links with organizations in Central and South America and beyond through formal programmatic efforts focused on education, particularly in the areas of early stabilization and process improvement.

Prior to joining Texas Children’s, Dr. Shekerdemian served as Chief of Paediatric Intensive Care Services at The Royal Children’s Hospital and Associate Professor of Paediatrics at the University of Melbourne in Australia.

She is a fellow of the American Academy of Pediatrics and the Royal College of Paediatrics and Child Health, and a member of the College of Intensive Care Medicine, the Cardiac Neurodevelopmental Outcomes Collaborative and the Pediatric Cardiac Intensive Care Society. She also sits on the editorial board of the journal, Congenital Heart Disease.

Her research interests include cardiovascular physiology and mechanical cardiopulmonary support, and long-term outcomes after critical care admission, particularly after surgery for heart disease. Throughout her career, she has conducted clinical and laboratory studies, participating as a principal investigator and co-investigator for numerous collaborative studies.