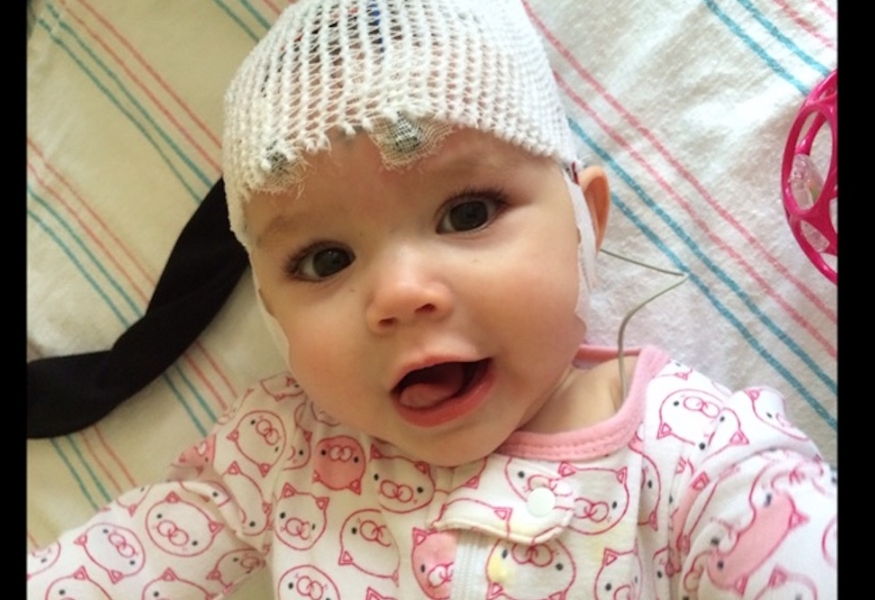 I will never forget the day I heard the words, “tuberous sclerosis complex.” I felt like it was the end of the world, but it was really just the beginning of a new kind of adventure for our family.

We were three months into trying to figure out what was “wrong” with our precious baby girl, Alana. She started having seizures in January 2014, and they were undoubtedly from an unknown cause.

I called Texas Children’s Hospital after a recommendation from a coworker who brings his daughter to the Blue Bird Circle Clinic at Texas Children’s Neuroscience Center. We were able to get Alana scheduled into their epilepsy monitoring unit (EMU) the very next day, which was nothing short of a miracle.

I took all of the information and test results we had gathered from three months of doctor’s visit and testing done locally in San Antonio. We must have been at Texas Children’s for just about an hour when I was hit with the diagnosis.

“Your daughter has tuberous sclerosis complex. We will do genetic testing to confirm, but this is my clinical diagnosis.”

I asked what this meant for my daughter’s future. Alana’s condition was severe in our doctor’s opinion, and he said she would most likely never walk or talk. This hit me like a ton of bricks. I immediately started tearing up, and I looked over at my sweet 7-month-old girl lying in her oversized crib.

Over the next several days, we did a full-body check to see just how involved Alana’s tuberous sclerosis complex (TSC) was. The electroencephalogram (EEG) showed she was having infantile spasms and partial complex seizures. We did an electrocardiogram (ECG) to check her heart, which revealed two tumors between her ventricles. Our ophthalmologist found a lesion on her right eye, beside her retina. There wasn’t any initial involvement with her kidneys, but a recent ultrasound found several small tumors and cysts in both organs. Alana also had a few hypomelanotic macules on her skin at the time, and has since developed several more. We worked with the EMU staff to come up with a treatment and medication plan and then headed back home to San Antonio.

Later, genetic testing confirmed a mutation in the TSC2 gene located on chromosome 16. This change disrupts the function of a protein called tuberin, which can lead to the features of TSC.

It took over a year for Alana to gain seizure control after several different medications. She was just over 2 years old when this happened, and she didn’t have a seizure for a year. Every so often she’ll experience breakthrough seizures, but she gains control again with minor tweaks to her medication.

Dr. Rohini Coorg, Truzella Benton and Teri Baierlipp have been absolutely amazing to work with. The genuine care they have for my daughter’s well-being definitely makes the four-hour drive to Houston (three to four times a year) worth it.

With the help of early childhood intervention, Alana learned to walk, self-feed and communicate.

Alana is now 5 years old, and she’s such a happy girl with a larger-than-life personality. She loves to run around with her brothers and twin sister. She only has a few words in her vocabulary, but can communicate her needs to us in her own way. She has many friends at school, and anyone who interacts with Alana falls in love with her. She’s just such a sweet girl. Alana is currently a kindergartener in the special needs classroom, where she’s cognitively functioning as an 18-20 month old.

I’ve made some wonderful friends along the way who are walking the same path as me, and I’m so thankful for their friendship. In fact, one of these friendships turned into a partnership as we form a chapter for the Tuberous Sclerosis Alliance (TSA) in San Antonio. We’re currently in the infancy stage of development, but we’re excited about educating and advocating for those with TSC in our community.

“WE’LL GIVE EVERYTHING BUT UP.”