Tics and Kids: When Should I Seek Care? 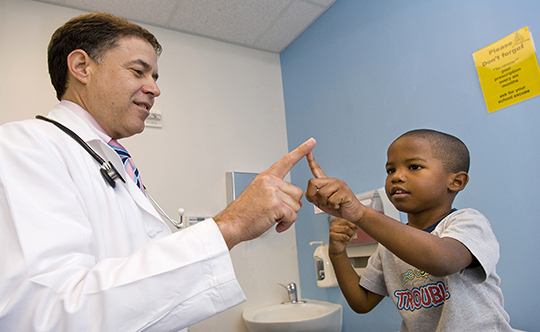 Up to 24% of children have transient tics. It is estimated that between one and 10 per 1000 children and adolescents have chronic tics (also sometimes referred to as Tourette syndrome when they have both motor and phonic tics).  A parent might first notice that their child has a tic when he or she displays brief, sudden, stereotyped movements or sounds that increase with stress, anxiety, or excitement. These tics have a mean age onset of between 6 and 7 years old and have a male to female ratio of 3:1. While the exact mechanism of how or why tics are formed in the brain is unknown, the disorder is likely due to neurotransmitter disturbances in the basal ganglia and is frequently present in multiple family members, indicating a genetic basis for these disorders. When a parent brings their child to a doctor to diagnose a tic disorder, they can expect the visit to include a physical exam as well as examining the history and description of the movements.  If the neurological exam is abnormal (such as increased tone, spasticity, rigidity, or weakness), tics may be secondary to another condition, and an MRI of the brain, with and without contrast, should be performed. Your child should also be referred to a neurologist.  However, in the vast majority of cases no further investigations are necessary unless the presentation and clinical findings suggest it. Many parents are surprised to learn that most tics in children are transient and do not require treatment. Even patients with mild Tourette syndrome may not require treatment, as treatment is indicated only when tics are interfering with activities of daily living, social interactions, are causing discomfort, or affecting school performance. If treatment is required, the main goal is to optimize the quality of life for the patient through reduction of tics and improvement of behavioral issues. Cognitive behavioral therapy, including habit-reversal training, is the only available treatment other than pharmaceutical drugs. If medication needs are indicated, treatment should be chosen based on the side effect profile and presence of additional conditions. In addition to a child having Tourette syndrome, other conditions may also be present. A large international study of 3,500 patients found that 60% of patients with Tourette syndrome had ADHD and 27% had OCD. An additional 32% had obsessive compulsive behavior, 23% had a learning disorder and 15% had a conduct disorder or oppositional defiant disorder (ODD). Boys were also more likely than girls to have comorbidities - meaning they were more likely to experience the presence of one or more disorders in addition to a primary disease. Tics can increase and decrease in severity (often described as waxing and waning) over time (days to weeks to months).  Tics may also become less frequent if the patient is engaged in other mental tasks and may increase in frequency with increasing stress, anxiety, or exciting situations. One question to ask yourself if your child is experiencing tics is, "Is the tic bothering the child?" If it is not, and if the tic is not interfering academically it likely does not need to be addressed by a specialist, although discussing it with your primary care physician is always a good idea. Looking for signs of anxiety and concentration issues is also an important matter if your child has tics. Often addressing these issues is as important, or often more important then the tics themselves.  Also keeping in mind, that if your child does have chronic tics (> 1 year) they often spontaneously improve (80% of the time) during the teenage years.
Author
Dr. Amber Stocco, neurologist