I Am A Mother Of 4 And A Cervical Cancer Survivor. This Is My Story. 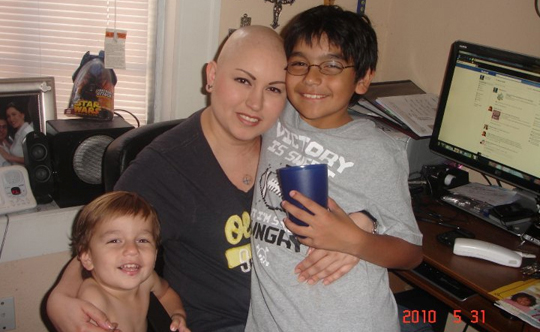 Bringing a child into this world is an amazing experience. In my case, not only did my husband and I create new life — our son Lukas saved mine.

In January 2008, just 1 day before my due date, my obstetrician checked me for early signs of labor and found an abnormality in my cervix. Shortly afterward, I learned that I had cervical cancer. My initial fear was for my life. I thought in horror: "Am I going to die?" But then I was struck by a more alarming concern, "Will my unborn child have cancer too?" Luckily, Lukas was born a healthy baby, delivered by C-section. Immediately after I saw my baby, they put me under general anesthesia and I received a radical hysterectomy. Since then, Dr. Concepcion Diaz-Arrastia, my gynecologic oncologist at Texas Children’s Pavilion for Women, has led me in my fight against cervical cancer. After my surgery we discovered that my cancer had spread, so numerous doses of chemotherapy and radiation followed. Thankfully, my cancer lessened and finally disappeared. I returned to work and my life regained some normalcy. Little did I know this was just the first battle. After 15 months in remission, I felt a lump on my neck. It turns out the cervical cancer had spread to 3 lymph nodes in my chest, so I had to undergo chemo and radiation again. This second round of treatment was far worse, physically and emotionally. Telling my children that my cancer had come back was devastating. I also felt my chances of surviving a second time were slim. My husband John was scared, but he stayed strong for the family. I tried to stay strong too, only allowing myself to break down at night after everyone was asleep. I wasn’t just sad, I was angry, mainly because of the time I was losing with my children. I was so weak from the chemo and radiation that I had to allow relatives to raise Lukas. I remember wondering if my baby would grow up without his mother.

I started going to chemo every week and then, upon Dr. Arrastia’s recommendation, went through another, stronger dose of radiation. This dose left me with second-degree burns and limited movement in my left arm. After this round of treatments, it was time for a break. 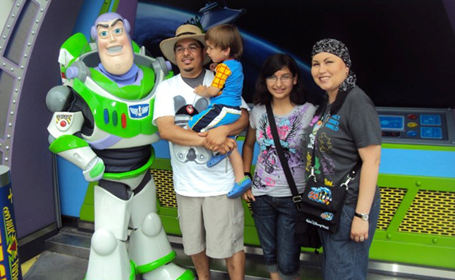 During my treatment hiatus we took our children to Disney World. It was an opportunity for me to release stress and focus on something fun, but it also gave me a chance to say my goodbyes. I remember posting on Facebook our last night: “Wish I could stay in this fantasy world longer.” But I knew I had to return to reality. My treatment started again in early July. Two months later, my routine check-up turned out to be anything but ordinary. I will always remember Dr. Arrastia saying to me, “That is 1 beautiful pet scan.” It was clear! For the first time in a long time, I was cancer free. I just marked 2 years of remission in September. My cancer battle has since caused a major shift in my priorities. Once career-driven, I now focus on making up for the time I lost with my children. I also focus on living a healthy, relatively stress-free life so that I can stay in remission. Family finances are tight at times since I have not returned to work. Even so, I would never go back to the days when work took me away from my children. I am lucky to still be here and will never take for granted this second chance to live.

I advise my daughter and other women not to make the mistake I did. Before I found out I had cervical cancer, I had not had a pap smear in over 3 years. If I hadn’t been pregnant, who knows how advanced the cancer would have become before my next doctor’s visit? I now stress the importance of annual well-woman exams as well as regular physicals. The lesson I’ve learned from my experience is that you should always take your health seriously. We should never fear doctors and we certainly should never disregard our health due to financial difficulties. A prenatal visit saved my life, just as a routine well-woman exam could 1 day save yours! 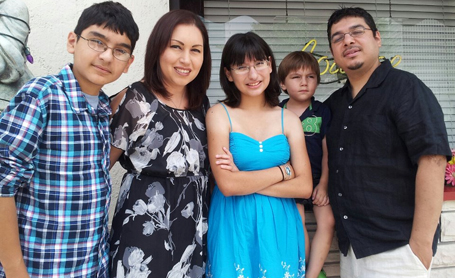