My daughter Theresa was born with Congenital Diaphragmatic Hernia (CDH) and has grown into a beautiful and smart child with a passion for life and a greater understanding of what it means to be thankful. Below is a short explanation of CDH from Theresa herself: 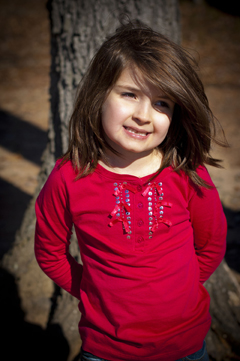 I had CDH when I was born. It means that I’m different than tons of kids, but not all kids. I’m different because my heart is on a different side, and so when I say the pledge of allegiance, I put my hand over my heart, on the different side. Having CDH also means when I was little, I didn’t eat from my mouth for a long time, so I ate from a tube near my belly button. It also means I go to more doctors. I go to Texas Children’s Hospital and see my doctors, and there is a big camera that takes pictures of my lungs. My lungs are smaller because of CDH, but I still get to play, draw, do math, and go swimming like all the other kids.

When I was little, I had to stay at Texas Children’s Hospital a lot. My mom told me that the first time, I stayed for 45 days when I was a baby. The second time I stayed for 10 days. Now, I only go and stay for a few minutes for different doctor visits and check-ups. My main doctor is Dr. Castle, but my mom says his real name is Dr. Cass, but I call him Dr. Castle. On my visits, I ask him questions like “Can I take karate lessons?” and he says “Yes!”

A few years ago, I don’t think I had ever given any thought to what a diaphragm muscle was, what it did, or even how to spell the word! Now, both my young children can say “diaphragmatic hernia” without stumbling.

Late September 2004, at our 20-week ultrasound, a problem with the baby I was carrying was detected. The doctor performing the ultrasound suspected a lung lesion, at worse. I remember his exact words were, “At least it isn’t congenital diaphragmatic hernia.” After four weeks had passed and many more doctors were seen, we got a very different diagnosis — it was in fact CDH.

After a completely normal birth with our first child just a year earlier, this potential complication was a totally new experience for us. Knowing time was of the essence and not wanting to waste a minute of it, my husband Tim immediately turned to cyberspace to research what might be wrong. 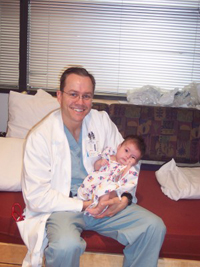 In his research, Tim found a hospital in Philadelphia that performed fetal surgery, so we flew there. Multiple tests revealed a different diagnosis — a hernia of the diaphragm — that had allowed several of Theresa’s organs to enter the chest cavity, crushing her lungs and displacing her heart.

Surgery soon after birth was the only solution. As Tim and I considered how we might disrupt our home to spend the necessary time in Philadelphia, doctors there recommended we consider the Texas Children's Fetal Center.

Finally, we were referred to the Fetal Center at Texas Children’s Hospital, and met Dr. Darrell Cass and Dr. Oluyinka Olutoye. After weeks of thorough discussions with Drs. Cass and Olutoye on their personal experiences with CDH patients, their beliefs in how the babies were to be medically treated after birth, a tour of the NICU and a meeting with neonatologists, we were given a better idea of what to expect — and we knew our baby would be in best hands at Texas Children’s. 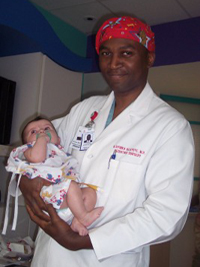 Theresa was born around noon on January 11, 2005 and was placed on ECMO that evening. Despite giving the doctors and us quite a few scares, Theresa did remarkably well, and came home after 45 days in the NICU with a feeding tube. She had a Nissen fundoplication a couple months later, and had her g-button placed at the same time. Eating was always our main concern with Theresa, but despite some setbacks along the way, she had her tube removed in February 2007, and the site surgically closed a couple months later.

She is our miracle baby. We prayed for a miracle, and we do feel God led us to Texas Children’s.

Since Theresa was treated at Texas Children’s 7 years ago, a lot has changed in the world of CDH. The Fetal Center can now perform an in-utero surgery to correct CDH, called Fetal Endoscopic Tracheal Occlusion (FETO). Currently two babies are recovering in the hospital’s NICU who underwent this surgery.

We realize we are blessed. We know that many parents whose children have not survived CDH would love to be where we are, and we are thankful. Looking at Theresa, most people would never suspect what she has been through, but there are still stresses over the unknown and worries that we are doing all we can for her every single day.