I recently had an interesting conversation with a friend. She mentioned to me that she had seen a sign in our Houston suburb advertising the fact that parents can opt out of school-required vaccines — a fact of which she was completely unaware. Obviously I encounter this issue often in my line of work; however, never have I encountered it so noticeably in my own backyard. If you’re curious as to what the sign read, check out the picture below. 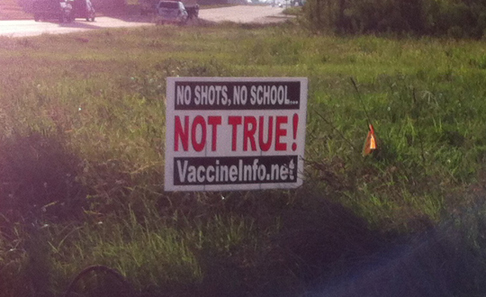 Are you surprised that children can continue to attend school if they are unimmunized? If so, then let me confirm — yes, it’s true. Here in Texas parents can choose to exempt from school vaccines due to religious, medical and philosophical reasons. Nearly all states allow religious and/or medical exemptions; however, only 20 states allow parents to exempt from vaccines based on their philosophical or personal beliefs. Texas is one of those 20 states. The law allowing philosophical exemptions was passed in 2003 and since then, rates of such exemptions have continually increased. For example, in the 2004-2005 school year Texas reported 2,722 philosophical exemptions. Most recently, in the 2011-2012 school year 28,432 philosophical exemptions were filed. Many believe that philosophical exemptions represent individual freedom and that parents should be able to exercise that freedom unequivocally. After all, many of the choices we make as parents are personal. Do we breastfeed or use formula? Do we let our babies cry it out or do we provide immediate comfort? Do we spank or use time out? Do we let our kids play video games or do we avoid them? Do we let our pre-teens have a cell phone or do we put it off until they are older? And some parents ask — do we immunize or do we refuse vaccines? As a parent, I can appreciate that we are each trying to protect our children and make the best choices possible. However, I would argue that the choice to immunize differs from many others in one important way — you’re not just making a choice for yourself or your child. You are also making a choice for others. Let me explain. Going back to my conversation with my friend, she has a particular interest in whether those in her community are immunized. Her interest lies with her son, Talan. Talan was born with serious medical issues including a malformed right leg, no right lung, no right arm, and a hole in his heart. While he is now 2 years old and walking well with his prosthesis, he will always be vulnerable to serious illness due to his medical issues. Talan is at higher risk of suffering complications from vaccine-preventable diseases such as influenza, pertussis, and pneumococcal disease than otherwise healthy children. Because he is vulnerable, his family and he must rely on those around him to be protected against vaccine-preventable diseases. As parents, we focus on raising our own children. But it’s not that simple. We live in communities where our lives overlap. And while many parenting choices are personal, at some level we also have a moral responsibility to protect each other’s children. So when it comes to vaccines — shouldn’t we consider both our personal choice and our moral responsibility? It would be devastating enough if my daughter suffered from a preventable disease like pertussis or the flu. But what about the additional guilt I would feel if I knew that a choice I made had a devastating impact on another child? What if that child was Talan or one of my daughter’s classmates who had leukemia or HIV? With respect and appreciation for the freedom we have in making our own medical decisions, vaccine exemptions represent one area in which parents often underestimate the potential impact their decision may have on those around them. Children who are unimmunized not only put themselves at risk for vaccine-preventable diseases but they increase the risk to others. At particular risk are those who are too young to be immunized, those who cannot receive immunizations due to certain medical conditions, and those like Talan who are more likely to suffer complications if they contract a vaccine-preventable disease. At the end of the day, vaccines are safe and effective. They save millions of lives each year. Lives that would otherwise be lost to diseases like polio, Hib meningitis, and hepatitis B. Yet parents who choose not immunize fail to understand that the sense of security they feel in making that choice is directly attributable to the success of vaccines. Here’s the catch — it is only with ongoing commitment to vaccines that rates of vaccine-preventable diseases will remain low. As parents, we can choose what is best for our child. But in our efforts to do so let’s not forget our moral responsibility to do what is best for our community. After all, it takes a village to raise a child.
Author
Rachel Cunningham, MPH, Immunization Project