Patients can be seen by Texas Children's experts in Cystic Fibrosis Care Center.

My Baby is a Cystic Fibrosis Carrier: What Does it Mean for Me and My Baby?

Before coming home, your baby had a blood test or newborn screen to look for different diseases. One was for cystic fibrosis (CF). Most babies whose newborn screen is positive or abnormal for CF do not have the disease. Many are carriers of one CF gene mutation but do not have CF and do not need special medical care.

However, if your baby is a CF carrier, then either you and/or your partner are also carriers of the CF gene mutation. If both of you are CF carriers, then you could have a baby with CF in the future. This fact sheet talks about what it means to be a carrier of a CF gene mutation.

What is Cystic Fibrosis?

CF causes lung and digestive problems. This is because the CF gene affects how salt moves through the cells. Babies who test positive to a newborn screen for CF must have a follow up sweat test or genetic test to see if they have CF. The sweat test measures the amount of salt in a person’s sweat. People with CF have too much salt in their sweat.

A genetic test looks for mutations or an abnormal CF gene. For a person to have CF they need to have two CF gene mutations. If the sweat test is negative, then there is almost no chance that your baby has CF.

What is a Carrier?

Our bodies are made up of tiny building blocks called cells. Inside the cells are thousands of instructions called genes. These genes tell the body how to grow and develop. Some genes determine what we look like (e.g. hair color and eye color). Some genes tell the cells how to work. Each gene comes in a pair. One gene comes from our mother’s egg and one gene comes from our father’s sperm. We all have mutations or changes in a few of our genes.

A carrier has a gene pair where one gene has a mutation and the other gene does not. A carrier is healthy because one gene is working. If both parents have mutations in the same gene, then their baby could get 2 genes with a mutation and be born with a health problem like CF.

What is a CF Carrier?

A CF carrier has one working CF gene and one CF gene with a mutation. A CF carrier does not have cystic fibrosis because one CF gene is still working. Since CF carriers are generally healthy, they may not know they carry a CF gene mutation until they either have a child with CF or are tested for a mutation.

How Does a Person Get CF?

A person has cystic fibrosis when both of the CF genes have mutations. This is because the person inherited one CF gene mutation from each parent. When a mother and father are both CF carriers, each pregnancy has a 1 in 4 (or 25%) chance for the baby to have cystic fibrosis. 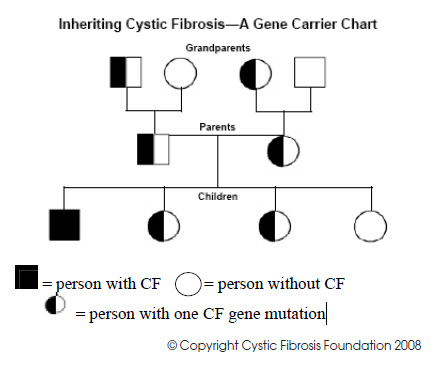 How Can I Find Out if I am a CF Carrier?

When your child grows up, he or she should be told that they carry a CF gene mutation. When your child is ready to have children, he/she should talk with a genetic counselor and doctor about being a carrier. Additionally, his/her spouse/partner should be tested to see if he/she is a CF carrier. If both partners are CF carriers they could have a child with CF.

Any blood relative (brother, sister, aunt, uncle, cousin, etc.) of a CF carrier might also be a CF carrier. Learning that your child is a CF carrier may be helpful for other family members in deciding whether or not to have testing to find out if they too carry a CF gene mutation.