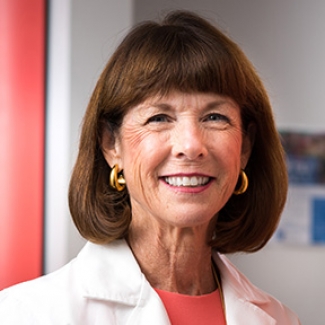 Dr. Susan Blaney is the David G. Poplack, M.D. Chair of Pediatric Hematology-Oncology at Texas Children's Hospital, the Elise C. Young Chair of Pediatric Oncology at Baylor College of Medicine, Director of Texas Children's Cancer and Hematology Center and Division Chief of Pediatric Hematology/Oncology for Baylor College of Medicine. She was the Vice Chair of the Children's Oncology Group (COG) from 2013-2020. COG is a National Cancer Institute (NCI) supported clinical trials group dedicated to improving the outcome for children with cancer and is the world's largest organization devoted exclusively to pediatric cancer research.

Dr. Blaney is a board-certified pediatric oncologist whose career over the past 25 years has focused on the development of new agents and therapeutic strategies for children with recurrent or refractory cancer, particularly for those with malignancies of the central nervous system. She has extensive experience in clinical translational research and previously served as the Principal Investigator of the Children’s Oncology Phase 1 and Pilot Consortium, as well as one of the founding members of the Pediatric Brain Tumor Consortium. Dr. Blaney has played a leadership role in the development of numerous clinical trials of novel agents for the treatment of childhood cancer.

Dr. Blaney has served as a mentor to many pediatric medical students, residents, fellows and faculty who are current or developing leaders in the field of pediatric oncology. Her influence in the field also extends to numerous advisory or membership roles that she has held including membership on the NCI’s Clinical Trial Advisory and Investigational Drug Steering Committees; as a regular consultant to the FDA’s Pediatric Oncology Drug Advisory Committee; and on multiple committees in the American Association for Cancer Research (AACR) as well as the American Society of Clinical Oncology (ASCO). In addition, she has served as a member of the American Board of Pediatrics Hematology/Oncology sub-board and chair of its credential’s committee. She also directs or serves on the scientific advisory board for the leading foundations for childhood cancer research.

Locally, Dr. Blaney serves a leadership role on multiple committees at Baylor College of Medicine and Texas Children’s Hospital. She has published more than 200 articles in peer-reviewed journals, has authored numerous book chapters, and is a co-editor for the leading textbook in pediatrics, Rudolph’s Pediatrics, as well as co-editor of the eighth edition of the leading textbook in pediatric oncology, Pizzo and Poplack’s Pediatric Oncology.

Not all superheroes wear capes. This month, they do.