Monkeys Have Pulmonary Hypertension, Too
Food Allergy: The Layers of Protection
Reducing the Risk of Children Developing Cancer Later in Life
Does my child need to be screened for cancer?
Appendicitis
Department
Brain Tumor Program
Cancer and Hematology Center 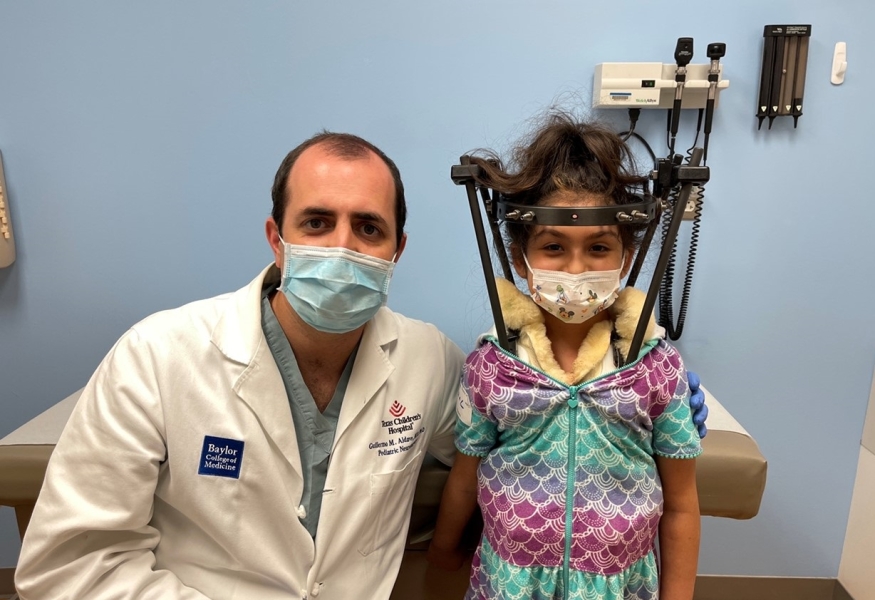 Every time Laura DeLeon sees 8-year-old, Mia, she is reminded of her daughter’s strength, bravery and resilience. In April, Mia underwent several surgeries to remove a large tumor from the base of her skull. Laura says her daughter has come a long way since then and her story is proof that miracles do happen.

“When I found out my daughter had a very rare, cancerous tumor on her skull, it was one of the scariest moments of my life,” Laura said. “In fact, it still makes me teary-eyed when I think about it. I remember having a hard time keeping my emotions together, but I wanted to be strong for my daughter. As I reflect back on it now, I never imagined Mia’s symptoms would turn into a life-threatening situation.”

Last November, Laura noticed something was wrong with Mia. She had been displaying very unusual behaviors that Laura had never seen before. Mia couldn’t stand up straight. Her snoring patterns were changing every night, and when she tried to speak, a puddle of saliva would come out of her mouth.

“I was very concerned about my daughter and felt so helpless,” Laura said. “When her symptoms did not improve, I took Mia to her pediatrician. We saw her pediatrician twice before she referred us to an ENT at Texas Children’s Hospital West Campus. When the doctor examined my daughter, he saw a suspicious growth in the back of her throat and ordered a CT scan. The CT results showed a large mass on the base of her skull. A biopsy confirmed the tumor was an aggressive cancer that had eroded Mia’s neck bone, and that’s why she could not stand up straight. When I heard this awful news, I felt my world was falling apart. I kept telling myself, ‘No, not my Mia. How could this happen to my daughter?’ When I was referred to Dr. Aldave and his surgical team, they told me they would do everything humanly possible to treat my brave daughter, and I clung to that hope and reassurance.”

Following the CT scan results, Mia was transferred to Texas Children’s Hospital in the Texas Medical Center where she was seen by Dr. Aldave, a renowned pediatric neurosurgeon in the Brain Tumor Program at Texas Children’s Cancer Center. In April of this year, Dr. Aldave met Mia and her mom to explain what was happening and what the multidisciplinary team could do to improve her outcome.

“Mia was diagnosed with a clival chordoma, a malignant tumor that invades the skull base and the cranio-cervical junction, where the spine meets the skull,” Aldave said. “This type of tumor is rare and comprises less than 1 percent of primary brain tumors in children. The only way to treat it effectively and increase the chances for survival, is to do a complete resection of the tumor. We performed Mia’s first surgery on April 13. It took three surgeries to completely remove the clival chordoma, followed by another surgery to reconstruct the connection between the spine and the skull. We performed the surgeries in phases and it took our team a period of 21 days to complete the entire surgery. It was the first time our neurosurgeons at Texas Children’s were able to achieve a complete resection of this very rare, complex and extremely large tumor which was comparable to the size of a large orange. This was an incredible accomplishment for our team, because in most hospitals, this type of tumor is not deemed operable or a complete resection is not feasible.”

Collaborating with our ENT physicians who determined Mia’s diagnosis, a multidisciplinary team from neurosurgery, craniofacial and neuro-oncology, were involved in Mia’s surgical case including Dr. Aldave, Dr. David Bauer. The surgery to resect the tumor around the base of Mia’s brain involved Dr. Aldave carefully removing most of the bone around the bottom of the skull in order to remove the tumor safely. Because of this, there was no longer a connection between Mia’s skull and spine to support her head. The support between the skull and spine needed to be safely and carefully constructed. Dr. Bauer reconstructed the connection between Mia’s spine and her skull.

“I placed screws into Mia’s cervical spine and I connected these screws through a titanium rod to her skull bone,” Bauer said. “This provided temporary stability until her bone could heal. Then, I removed two sections of rib from Mia’s chest and I split the ribs in half. I then carefully molded these ribs to fit perfectly between the skull and spine. This allowed bone to heal between the skull and spine, creating stability and a safe connection that would last her for the rest of her life. We then closed up the incisions and had her remain in a halo vest, which provided a little extra external stability while the bone healed. She came through the surgery so well, and in clinic, our X-rays now show bone healing which is amazing for Mia.”

It’s been four months since Mia’s surgeries and Laura says her daughter is doing remarkably well. She calls her daughter “a living miracle,” and she is so grateful to the team who saved Mia’s life.

“Dr. Aldave, Dr. Bauer, and every physician and nurse who touched my daughter’s life and were involved in her care, are superheroes,” Laura said. “I can’t thank them enough. I appreciate their transparency about Mia’s condition, and being there for us during one of the darkest moments in our lives. They treated my daughter not just as their patient, but they treated her as if Mia was one of their own children. I could have lost my daughter last year if it weren’t for these incredible heroes who stepped in to help us. The nurses and child life staff who supported us during our 8-week stay in the PICU were awesome as well. Everybody was so amazing. I can’t thank Texas Children’s enough for giving my Mia a second chance.”

Mia continues to see Dr. Aldave regularly for her follow-up appointments. She no longer needs to wear the halo vest for support. While her long-term prognosis is very good, Mia will begin radiation treatment to reduce the chances of the tumor from coming back.

“I hope Mia’s story will inspire other families,” Laura said. “My best advice to parents is to pay attention to their child’s symptoms, even symptoms that may not appear serious at first. I’m so glad Mia came to Texas Children’s where she was treated by the best neurosurgeons in the world. Once Mia’s tumor was removed, I donated it to science so more research can be done to help other Mia’s in the world.”

Click here to learn more about Texas Children’s Brain Tumor Program and how our physicians are leveraging the most advanced treatments and innovations to improve the lives of children, like Mia.
Author
Laura DeLeon, Mia's mother