We first learned of Sophia's diagnosis on Easter Sunday in 2015. Sophia was turning 13 in a month, and was active in volleyball and basketball. She loved singing in the choir and was very active in her youth group at church. Right before spring break, she started complaining of an ear ache and her glands were swollen. A few trips to our family doctor were not conclusive, but he ruled out several things and put her on antibiotics. While in Austin for spring break, the right side of her face began to droop. She was driven to the emergency room where they administered steroids. The next day her face was fine and she felt better, but by the following weekend she complained that her chest felt heavy. Her glands were swollen again and the pain from her ear had traveled to the other side. She told me, "Mom, I need to go to the emergency room." Since this seemed so unusual, her father and I took her to Texas Children's emergency center. They did some blood work and took an X-ray. When the doctor came in, she introduced herself as Dr. Saman Khalid, an oncologist. I thought to myself, oncologist? They must be shorthanded tonight. So I spoke up and said, "Excuse me, oncologist? Isn't that cancer?" And as she put up Sophia's X-ray she said, "Yes. We believe your daughter has lymphoma, but it is very treatable."

As she explained what would be taking place in the next few days, I stared in disbelief at the 11 centimeter mass in her chest from the X-ray. The lymph nodes had gotten so large that they had formed a massive blockage which hindered her breathing. In my head I was yelling, "Cancer? No way, you've made a mistake. She's normal. She's healthy!" I was in total shock. Everything stopped. Things that were important suddenly weren’t important anymore. Her dad had to prepare Easter brunch for 100 people at his restaurant so he went home to prepare. He would be back as soon as he could get away. As Sophia and I waited for a room, I called our music minister, John Talley. I woke him up and all I remember saying is, “I'm at Texas Children's with Sophia. They think she has cancer. I won't be able to play the piano in the morning for the Easter service." He was in shock as well. He got his thoughts together for the service and put Sophia on the prayer chain. I also called a good friend who lived close to the hospital. He came and sat with us until we got a room. It was in the early hours of Easter morning when we finally got settled in and tried to get some rest. That night Sophia looked at me and said, "Mom, can you believe that I have cancer?" I shook my head and said, "No sweetie. I believe they made a mistake." That afternoon, we had 30 visitors inside the room and more out in the hall. Little did we know we were being inducted into a world that we knew nothing about. We were now members of the "Gold Club" (families fighting childhood cancer). 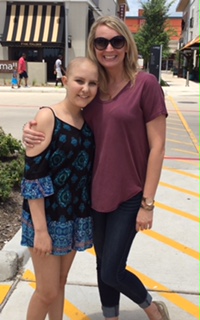 After the biopsy, spinal tap and bone marrow aspirations, we were told her diagnosis was actually, Leukemia. T-cell acute lymphoblastic leukemia to be exact. As we sat in the room with Dr. Edward Sison, he talked about what her treatment plan would look like and how we would absolutely love the nurse practitioner assigned to us.

He also told us about a new study Sophia might qualify for. She would be on the same road map with other children with this diagnosis, but the treatment would also include the drug called bortezimib. He explained this drug had shown promise in adults who had relapsed and studies were hopeful that it might work well in children. We opted to apply for her to be accepted to the study and within hours, she was.

The night before her first chemotherapy, all our friends from church were asked to "pray4sophia" at midnight. In our hospital room, I was ready to pray and Sophia stopped me and said, "Mom, I got this.” From her heart was the most beautiful prayer I'd ever heard. It was the prayer of an extremely brave 12-year-old who thanked God for giving her this challenge. She prayed that His will would be done, and that others would see Christ through her life. Her positive attitude and sweet spirit has been with her throughout this journey. Sophia is now in the maintenance phase of treatment and will be finished on July, 31 2017. If you are around, come by and watch her ring the bell on the fourteenth floor of the Wallace Tower.

By the way, we saw our nurse practitioner several times a week during the first phase of treatment and formed a strong bond. She was, and is, a shining light throughout this roller coaster ride. Jalane Theis is a rock star. This nurse practitioner saves lives on a daily basis. Thank you Jalane. You will be greatly missed by our family. We love you.