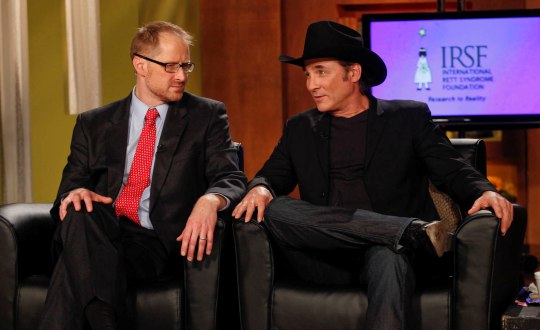 Sitting in the living room of Michael and Kenna Seiler's home in The Woodlands feels comfy and welcoming. Eleven-year-old Ethan sits at his computer as Michael returns from an afternoon run, and from just around the corner the sounds of a toddler's song, "If You're Happy and You Know It," drift through the house. Everything seems normal. But the child whose face lights up at the cheerful sound of the repetitive lyrics is not a toddler — Rachael is 7 and cannot clap her hands or sing along. She is a Rett syndrome "Silent Angel" and one of the many reasons Kevin and Clint Black are dedicated to helping fund a cure for the devastating neurological disorder. Clint Black and his brother Kevin share a bond beyond their brotherly love and passion for music. Kevin lost his 16-year-old daughter, Cortney, to Rett syndrome and since that time the Black brothers have been actively pursuing every opportunity to expand awareness of this often-misdiagnosed syndrome. Kevin Black's daughter, Cortney, and Rachael both started out as healthy full-term babies; it wasn't until months later that family members of both girls started mentioning what the parents already knew — their daughters weren't progressing normally. Kenna and Michael started a long, frustrating medical journey of false assurances and a process of elimination to rule out Angelman's Syndrome and other disorders that mimic Rett syndrome. Rett affects about 1 in 10,000 female births. Early on, atypical hand motions are a telltale sign of the disorder. Finally, at Texas Children's Hospital, clinical findings, confirmed by a blood test, validated a diagnosis of Rett. Cortney, Kevin's daughter, also diagnosed at the Bluebird Circle Rett Center at Texas Children's Hospital, was the youngest girl at the time to be diagnosed. The Seiler's remain positive and Kenna's advice for newly diagnosed families is uplifting. She tells them they will smile again. Although Rachael's food must be pureed, she can only communicate using a visually activated Dyna-vox speech device and cannot walk, she still "has her wings." She also loves the Wiggles, Elmo, pudding, her Nanny Marissa, and her big brown eyes radiate joy when she sees Ethan. The Seilers, Kevin and Clint will continue their efforts until Rachael, and every child with Rett can sing along and clap their hands to even the simplest childhood songs. To help spread the word, Clint Black and Dr. Jeffrey Neul, a researcher at the Jan and Dan Duncan Neurological Research Institute (NRI) at Texas Children's Hospital, participated in a national media tour a few weeks ago to discuss Rett syndrome. Marking October as National Rett Syndrome Awareness month, the 2 men shared information with journalists from around the country, including how the disease is often misdiagnosed. Dr. Neul is one of the country's leading physician-scientists involved in treating and researching Rett syndrome, the only autism-spectrum disorder with a known genetic cause. As the world's first basic research institute dedicated to childhood neurological diseases, the NRI is at the forefront of studying Rett syndrome. For more information, please visit rettsyndrome.org or nri.texaschildrens.org.