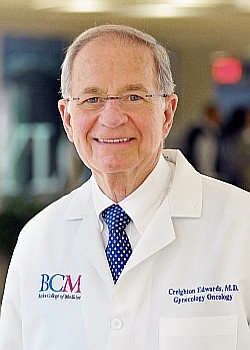 Dr. Edwards? clinical practice is focused on the care of women with complex benign gynecologic conditions and cancers. His approach to cancer care is one that provides state of the art evaluation and treatment including a highly personalized supportive care system regardless of the outcome.

Dr. Edwards received his medical degree in 1960 from the University of Texas Southwestern Medical School in Dallas, Texas. He is a board certified gynecologic oncologist, highly skilled and most often consulted by his colleagues and other peers especially in complex cases. Mentoring has always been one of Dr. Edwards? passions. He has successfully mentored medical students and residents in Obstetrics and Gynecology and Fellows in Gynecologic Oncology since 1968, both in the operating room and in clinical practice. In addition, he also mentored a graduate student of Biomedical Science. His goal is to train and hone medical students, residents, and fellows into becoming topnotch physicians.

In 2008, he was awarded the Raymond H. Kaufman, MD and Patricia Ann Kaufman Endowed Chair in Obstetrics and Gynecology for his numerous accomplishments and contributions to this specialized field of medicine. In the same year, he received top honors as Physician of the Year for the Baylor Clinic at Baylor College of Medicine.

In May, 2013, Dr. Edwards received the Houston Surgical Society's Distinguished Surgeon of the Year award. Dr. Edwards was also presented with the Award in Compassionate Care in November 2013 by the American College of Obstetricians and Gynecologists, an award made possible through an anonymous donor.

Currently, his research interest is focused on the expression of spermatogenesis-related retrogene in ovarian cancer. Aside from the weekly BCM OB-GYN Grand Rounds, he is actively involved with the Tumor Boards at The Methodist Hospital, St. Luke's Episcopal Hospital and Ben Taub General Hospital.