Texas Children’s Celebrates 10th Anniversary of its Medical Legal Partnership
Third time’s a charm
It was worth every mile
Five Years of Seizure-Free Living, Thanks to Texas Children’s
Fall and Winter Wellness
Department
Heart Center
Cardiology 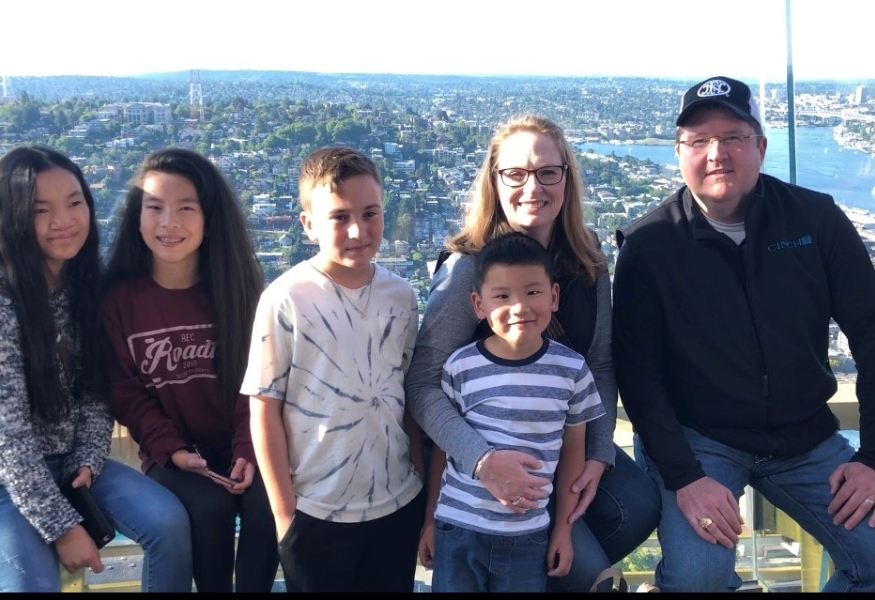 Patti Allen and her husband, Dennis, always dreamed of becoming parents. While many couples start having children during their early years, the Allens started their family later on in life.

“My husband and I shared a strong interest in adopting children,” Patti said. “As an adopted child, I knew there were other children like me who deserved a family who could love them unconditionally. While still living in upstate New York, we came across an adoption agency that had a program that only adopted from two places – the United States and China. When we filled out the adoption application, we checked off both places. We knew there were children from China who needed loving homes, too.”

“We are so blessed to have our kids,” Patti said. “When we decided to adopt, we were open to adopting children with or without special needs. It didn’t matter to us. One thing we’ve learned from our children is how strong and resilient they are despite the challenges they face. Since moving our family to Houston, we are grateful to Texas Children’s for always being there to support us and meet our children’s needs.”

When the Allens adopted Gracie from China, she was born with a congenital heart defect called single ventricle heterotaxy syndrome. She underwent several heart catheterizations including two surgeries – a Glenn procedure performed in China and a Fontan procedure performed in Chicago, before becoming a patient at Texas Children’s. As part of Gracie’s follow-up care, she sees her cardiologist, Dr. Silvana Molossi, who also cares for the couple’s son, Gunner, at Texas Children’s Heart Center®.

“Despite the complexity of Gunner’s heart condition and pulmonary hypertension, his doctors, including his congenital heart surgeon, Dr. Jeffrey Heinle, and pulmonologist, Dr. Fadel Ruiz, never gave up on him,” Patti said. “Dr. Ruiz tried different medications and tweaked them to see which ones would work. The teams were very collaborative. They’d work with the cardiology team and conference them in to discuss Gunner’s care. Then, Dr. Molossi would talk with Dr. Heinle in hopes of getting Gunner’s lung pressure down so he could be a candidate for the Fontan procedure to improve his outcomes. The team worked so diligently to find a new treatment path for Gunner – and that is what’s amazing about Texas Children’s. They never give up.”

Just like her younger siblings, Jaylynn overcame her challenges too. Jaylynn was born with cleft lip and cleft palate, and endured seven major facial reconstruction surgeries at Texas Children’s. Her most recent surgery occurred during the Christmas holiday. She continues to receive follow-up care from her craniofacial orthodontist, Dr. John Wirthlin, who is part of Texas Children’s Cleft and Craniofacial team, and her plastic and reconstructive surgeon, Dr. Laura Monson, at Texas Children’s Cleft Lip and Palate Clinic.

“Our children are just like normal kids,” Patti said. “Our oldest daughter, Jaylynn, is a senior in high school. She’s on the National Honor Society and has received multiple scholarships. She’s now figuring out where she wants to go to college. Gracie, who is a high school freshman and plays on her school’s soccer team, will one day transition to the Adult Congenital Heart Program at Texas Children’s, so we’re preparing her for that. Our youngest son, Gunner is a normal active 8-year-old who enjoys riding his hover board. When we first met Gunner in China, we were told he would need a heart transplant. China was not planning to intervene in Gunner’s care because they believed his heart condition was not repairable. We are grateful to be able to give Gunner a second chance at life. Grayson, our oldest son who we adopted first in the United States, absolutely adores his Chinese siblings as much as we do.” As a multi-cultural family, Patti says it’s been their family tradition to celebrate their children’s Chinese culture and heritage. Before Gunner and Jaylynn came to America, the only language they knew how to speak was Chinese. Now, they are fluent in English. During Lunar New Year which is celebrated on February 12 this year, the family will adorn their home with Chinese decorations and celebrate with a big Chinese meal.

“We love celebrating their culture as a family of six,” Patti said. “To see where our kids came from and how much they have accomplished in their young lives is truly a miracle. It brings me to tears every time I think about it – tears of joy and happiness. They are such great kids, and I’m honored to be their mom.”

Click here to learn more about Texas Children’s Heart Center®, ranked No. 1 in the nation for pediatric cardiology and heart surgery.