Lance's story: The beat goes on 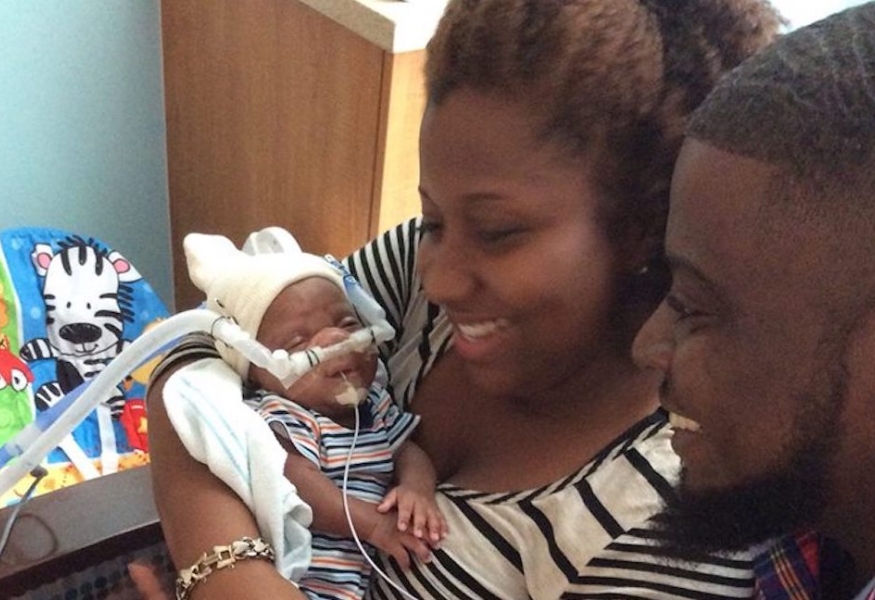 The melodies of “The Wiggles” are coming from the living room TV as a toddler stands in the center of the room, pretending to play his blue Mickey Mouse guitar. Lance has a passion for playing instruments. As his father and I glance at him, we remember how four years ago we never thought we’d see him grow into such a vibrant, intelligent boy.

I will never forget 2014. When I was 18 weeks pregnant, my OB/GYN suggested a cervical cerclage considering a previous miscarriage of mine. My pregnancy was considered high-risk, so we monitored and checked in weekly with our obstetrician. Two weeks later, he realized Lance was underweight and put me on bed rest at home. We were nervous and shaken; however, we kept smiles on our faces and embraced positive energy around us. In April 2014, Lance had no progression to his growth, so my pregnancy was diagnosed as intrauterine growth restriction (IUGR). This is a condition in which a baby doesn’t grow properly to a normal weight in utero.

When I was at the 24-week mark of my pregnancy, my high-risk obstetrician immediately admitted us into Texas Children’s Pavilion for Women. Things had become “very scary” at this point, and it all felt like a nightmare we couldn’t wake up from. While I was on bed rest, a nutritionist would regularly visit my room. We were monitored from sun up to sun down. Lance’s heart rate dropped regularly throughout my bed rest, and overnight doctors and nurses would rush to my room on several occasions to check on us. It became surreal!

I had moments when I felt miserable and sad, but the emphatic nursing staff on my floor kept my spirits lifted with their genuine care for me. Lance had met his 1-pound mark at this point, and our high-risk obstetrician was ready to get him out of me and into the NICU. In most pregnancies, nature signals birth when the water breaks and contractions start. Not mine. Our delivery date was scheduled for May 25, and Lance was only 1 pound, 11 ounces. I was shaking and filled with mixed emotions. I prayed with Lance’s father for our son to enter the world peacefully. My nerves were in full shock as I was rolled into the labor and delivery room, but a team of nurses and specialists who would care for our preemie once he was born surrounded me. When Lance arrived, he was immediately placed in an incubator and sent to the NICU. He was too small to be held; too small to even receive a first kiss from his mother.

Lance spent five months in the NICU at Texas Children’s. When he was born, I felt like that moment was a never-ending story. The first time I laid my eyes on him, he looked helpless, sick and fragile. I began to cry in disbelief. Our NICU stay was an emotional journey: two blood transfusions, many feeding tubes and a broken femur. Lance started on a ventilator and then moved to a CPAP. We spent many sleepless nights at the hospital, reading children’s books and holding Lance until he fell asleep. Texas Children’s is destined for all the precious babies in its care. It really takes special people to take care of these NICU babies with endless amounts of pride, ambition and empathy. I can’t thank Texas Children’s enough for their dedication.

Lance’s father and I were filled with joy when we were able to bring our “tough guy” home on Oct. 13, 2014. He weighed 10 pounds, but still needed a small amount of oxygen and his feeding tube. By December 2014, Lance was breathing on his own and feeding by mouth. All we could say was, “Praise God for all the glory!” Of course, Lance had many follow-up visits and physical therapy sessions, and he was diagnosed with several developmental delays. Lance continued to overcome the odds, though. His father and I are now dedicated members of Texas Children’s Newborn Family Advisory Committee (NFAC). We want to give back to NICU parents who are in the shoes we filled, those who feel brokenhearted, hopeless and overwhelmed. We’re there to guide them with an open, genuine heart.

If you see Lance with your own eyes today, you’re witnessing a miracle. He enjoys interacting with his peers and playing at the park with his younger brother. Let’s not forget how much he loves playing music on his instruments … he knows the name for each one! Every day is drum practice at home with some help from his favorite YouTube channels. He is getting the hang of drumming to his favorite tunes!

In August, Lance will start pre-kindergarten. He already recognizes his colors and shapes, and he knows his numbers up to 50. Lance – you rock, buddy! The journey we faced at Texas Children’s was written in stone from the beginning, and we were chosen to be your parents. We’re so blessed to be your parents. We will continue to rock to your music, so let the beat go on.