It's not a pleasant topic... but somebody's got to talk about it... nose bleeds.

The problem is the way the nose is built. The nose or nasal cavity is lined with many small blood vessels that are covered with a very thin and fragile layer of tissue. Once the protective lining of the nose is irritated, scratched, or broken, it takes a long time to heal. These problems become recurrent since the damaged nasal lining is vulnerable to trauma, even dry nasal mucus can cause repeated problems.

Using the heat in your home dries our the air, decreases the moisture in the air we breathe, and dries out the mucus. This will increase the risk of nose bleeds. Since we're really using the heat now, we may start seeing more nose bleeds. 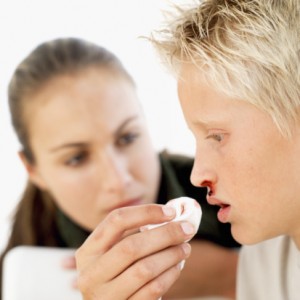 Even though the bleeding may look dramatic, most nose bleeds can be managed at home. The first thing to do is reassure your child. If this looks scary to you, just think of how it looks to your child! Everything will go more smoothly if everybody stays calm.

Placing pressure on the front of the nasal septum (the wall in the middle of the nose) will usually be very effective to stop the bleeding. Ice placed on or below the upper lip will also help.

Once the bleeding stops, you should:

If these steps don't decrease the frequency and severity of the nose bleeds, you may require a visit to the doctor's office. If your child isn't too wiggly, the doctor may be able to see some dilated or irritated blood vessels and can use a silver nitrate stick to cauterize the blood vessels. Rarely, we may need to go to the operating room to do this.

It's true that nose bleeds usually look worse than they actually are... but every once in a while, a nose bleed may be serious. These cases are uncommon, but you want to be sure that your child doesn't have one of the serious causes for nose bleeds.

It's important to remember that most commonly nose bleeds aren't serious.

BUT, if the symptoms are only on one side, last a very long time, or don't stop with the steps suggested above... then you should bring your child for a visit.

I'll talk about bleeding from the ear in a future post. Have a happy and healthy new year!