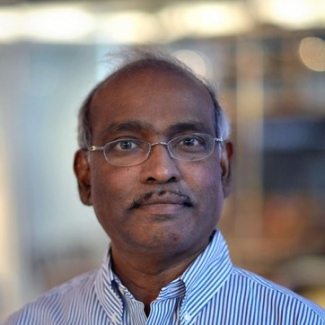 Dr. Pulivarthi Rao is Director of the Cancer Cytogenetics Core Laboratory and a principal investigator for the Cancer Genetics and Genomics Program at Texas Children's Cancer and Hematology Center. He is certified with a Clinical Laboratory Cytogenetics Director License by the New York State Department of Health.

The main goals of the Rao laboratory are to identify oncogenes from the amplified chromosomal regions and the role of genomic instability in osteosarcoma (OS). Osteosarcoma is the most frequent bone neoplasm in children and often present with a high number of chromosomal amplifications and deletions, suggesting that genomic instability is linked to tumor development.

Recently, we identified CDC5L, a cell cycle regulator gene as target for 6p12-p21 amplicon found in osteosarcoma. Our recent in vivo studies suggest that CDC5L was a potential oncogene.

The goal of the laboratory is to investigate the role of CDC5L in the development of genomic instability and progression of osteosarcoma by overexpressing CDC5L cDNA and down-regulating by SiRNA in normal osteoblasts. A wide range of functional, comparative and cytogenetic techniques will be utilized in these studies, including: conventional and molecular cytogenetics- FISH, comparative genomic hybridization (CGH), multicolor spectral karyotyping (SKY), and array CGH.