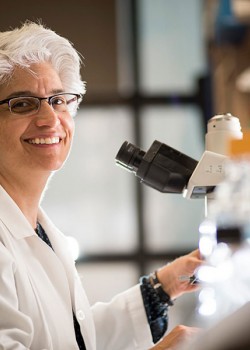 The main area of interest of our laboratory is the telomere, the natural end of eukaryotic chromosomes. The essential role of this nucleoprotein structure is to protect chromosome ends from being sensed as DNA breaks, thereby preventing the deleterious fusion of chromosomes by the DNA repair machinery. Telomere biology has emerged as an important facet of cancer research, as there is mounting evidence that loss of telomere end protection might contribute significantly to the genome instability that drives tumorigenesis.

Research in the our laboratory has focused on the Ku heterodimer. In the budding yeast Saccharomyces cerevisiae this protein is critical for the end-joining pathway of DNA repair, yet paradoxically also functions at telomeres, which are normally resistant to end-to-end fusions. This dichotomy extends further to mammalian cells where Ku mediates the fusion of dysfunctional telomeres, yet is itself required to prevent chromosomal end fusions. Using S. cerevisiae as a model system, we have addressed this conundrum by demonstrating that Ku not only plays distinct roles at ends created by DNA breaks vs. telomeres, but also has multiple separable functions in telomere structure and maintenance. A major goal over the next few years is to uncover the mechanism by which Ku maintains functional telomeres.

Replication of telomeric DNA requires the enzyme telomerase. In the absence of telomerase, telomeres shorten as cells divide, ultimately leading to senescence. Rarely, telomerase-deficient yeast cells escape senescence using recombination-based mechanisms to maintain telomere length. A separate focus of our research is the role the Ku heterodimer plays in this pathway. We have shown that Ku inhibits telomere-telomere recombination in the absence of telomerase, and under certain genetic conditions, Ku deficiency may accelerate the appearance of telomerase-independent survivors. Understanding such telomerase-independent maintenance mechanisms is relevant to human cancer. Most normal human somatic cells lack telomerase, resulting in telomere shortening and limiting replicative potential. To circumvent this, human tumors adopt one of two general pathways of telomere maintenance: telomerase activation or ALT (alternative lengthening of telomeres). Telomerase activation is the predominant pathway observed in carcinomas, however little is known about telomere maintenance in malignancies that arise in children. Preliminary reports suggest that non-epithelial tumors, more typical of the pediatric population, may more often rely on ALT. Consequently, we are interested in the mechanism by which pediatric malignancies maintain their telomeres, and assessing the impact the different mechanisms have on metastatic potential and clinical outcome. This question has particular relevance as telomere-based therapies begin to enter the clinical arena.