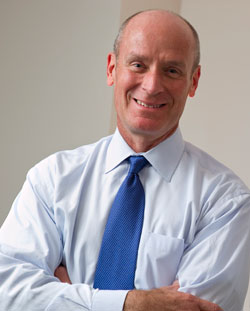 Mark W. Kline, MD, a medical specialist in pediatric infectious diseases, HIV/AIDS and global child health, is the J.S. Abercrombie Professor and Chairman of the Department of Pediatrics at Baylor College of Medicine (BCM) and the Ralph D. Feigin Chair and Physician-in-Chief of Texas Children's Hospital.

A long-time researcher in pediatric HIV/AIDS, Dr. Kline has been the recipient and principal investigator for more than $50 million in research grants from the U.S. National Institutes of Health and Centers for Disease Control and Prevention. He has authored more than 250 scientific articles and textbook chapters and has presented over 300 national and international lectures on subjects related to infectious diseases of children and global child health. He directed international research for the NIH-funded BCM Center for AIDS Research and AIDS International Training and Research Program for more than 15 years.

Dr. Kline is the founder and President of the BCM International Pediatric AIDS Initiative (BIPAI) at Texas Children's Hospital, a program that encompasses HIV/AIDS care and treatment and health professional education and training programs across sub-Saharan Africa, Libya and Romania. BIPAI provides HIV/AIDS care and treatment to more than 200,000 children, mostly in sub-Saharan Africa.

His many honors and awards include the Dag Hammarksjold Award from the International Association of Physicians in AIDS Care (1998), the Association of American Medical Colleges Humanism in Medicine Award (2002), the Annual Award in HIV/AIDS of the World Foundation for AIDS Research and Prevention (2006), the Distinguished Faculty Award of Baylor College of Medicine (2007), the Medical Award of Excellence from Ronald McDonald House Charities (2007), the Distinguished Alumnus Award of Trinity University (2008), the Millie and Richard Brock Award of the New York Academy of Medicine (2009) and the Jacqueline Kennedy Onassis Award for Public Service (2010).

He is listed in Who's Who in America and U.S. News Top Doctors.