It’s not every day that physicians at Texas Children’s get the opportunity to treat a child and their parent, but that’s exactly what happened when Caitlin King became a patient of Texas Children’s Pectus Program.

The program is part of Texas Children’s Division of Pediatric Surgery and is run by a specialized team that assesses and treats an assortment of chest wall abnormalities such as pectus excavatum, where the chest has a sunken or caved-in appearance, and pectus carinatum, where the chest bows outward.

Caitlin King, 15, came to Texas Children’s in 2017 seeking help for pectus excavatum, a condition her father, Niky King, had suffered from since he was an early teen. Niky said he got his chest looked at when he was about 12 or 13, but doctors told him there was nothing wrong and that the issue was just cosmetic. When Caitlin was born, Niky said he hoped she would not inherit the same condition, but that if she did, doctors would be able and willing to do something about it.

“My chest affected my life dramatically,” said Niky, who used to have heart palpitations and difficulty taking deep breaths. “I was very self-conscience of it, and am convinced it hindered my ability to do physical activity for a sustained period of time.” 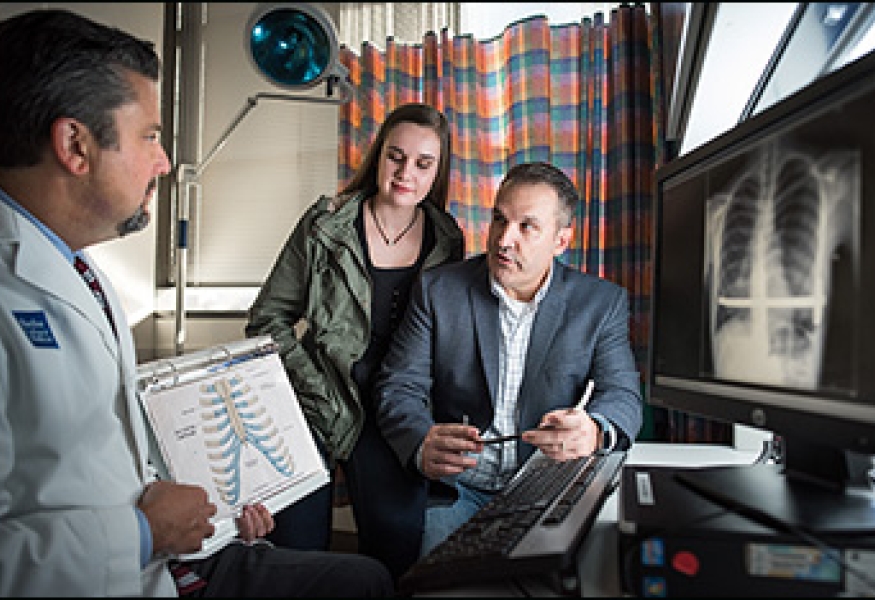 Caitlin and Niky King talk to Dr. Mark Mazziotti, who treated the father and daughter for a condition called pectus excavatum.

After assessing Catlin, Dr. Mark Mazziotti, a pediatric surgeon with the Pectus Program, assured the teenager and her father that he could correct her pectus excavatum via a minimally invasive surgery called the Nuss procedure. During this procedure, a curved stainless steel bar is inserted in the chest through small incisions on either side, and is guided between the sternum and the heart under direct visualization with a camera through a small incision in the right chest. The bar is left in place for about three years. Recurrence of the pectus excavatum after the bar is removed is very rare.

“This is a very rewarding procedure for the patient,” said Mazziotti, who surgically corrects about 50 pectus excavatum surgeries a year. “We have excellent outcomes, and Caitlin’s case has been no different.”

Since her surgery, Caitlin said “she’s been able to wear whatever she wants” because her chest already looks so much better. She also said she can exercise and maintain a normal, active lifestyle without any hesitation.

“I can’t tell the bar is there at all,” she said. “I’m very happy I decided to move forward with the procedure.”

Caitlin’s procedure went so well, Niky underwent the same procedure three months later. Mazziotti performed the procedure, and because of the severity of Niky’s pectus excavatum, inserted two bars instead of one. The results, Niky said, have been fantastic, just like his daughter’s.

Mazziotti attributes the great outcomes the Caitlin and Niky, and other pectus patients have had to the skill of the surgeons in the program and the fact that they have the ability to offer the most cutting edge technology and procedures. He also said the program’s partnership with anesthesiology and pain management is key as patients typically have to stay in the hospital for several days to recover.

“Texas Children’s Pectus Program is highly specialized and prides itself on offering individualized care,” he said. “We are privileged to be able to treat patients across Texas, the region and the country.”