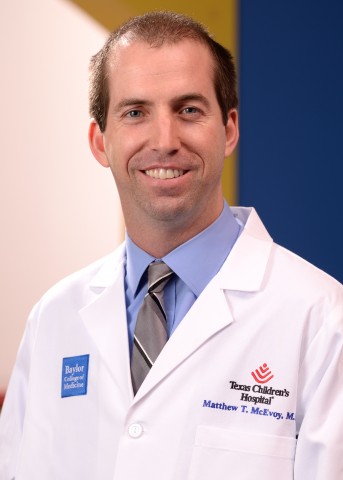 Dr. Matthew McEvoy started his pediatric hematology/oncology fellowship training in 2018. As a clinical fellow, he cares for patients in all the Hematology-Oncology and BMT programs.

Dr. McEvoy completed his residency in Pediatrics at Children's Hospital Colorado, a perennial Top 10 Children's Hospital in the U.S. In addition to his general pediatric training, he gained additional experience in several fields, including: Hematology-Oncology (both inpatient and outpatient), Hemophilia and Thrombosis, Radiation Oncology, Palliative Care, Orthopedic Oncology, and Neuro-Oncology research.

Dr. McEvoy decided in October 2006 to become a pediatric oncologist, while he was a sophomore in college. He made his decision based on previous family experience and a specific enlightening class called "Becoming a Doctor," and his decision was subsequently re-affirmed by his experience volunteering at summer camps for children with cancer.

Dr. McEvoy has extensive experience as a counselor, advisor, and medical staff for several summer camps that benefit children affected by cancer. He has volunteered at Camp Okizu in California (nine years), Roundup River Ranch in Colorado (one year), and Camp Kesem, a camp for children whose parents have cancer (11 years). He plans to become involved with Camp Periwinkle and Camp Kesem-Rice University while in Houston.

Board Certifications
American Board of Pediatrics

Dr. McEvoy hopes to conduct clinical research involving quailty of life, palliative care, and/or children with bone cancers. He will select a research project during his second year of fellowship.

He was the first author for case report: "Successful Treatment of Recurrent Li-Fraumeni Syndrome-related Choroid Plexus Carcinoma" and his work has been published in the Journal of Pediatric Hematology-Oncology.