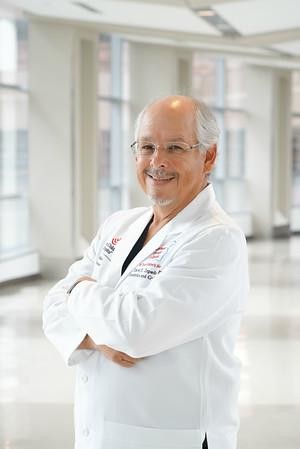 Dr. David Zepeda is one of the two founding partners of the original Women's Specialists of Houston. He was born and raised in Houston and attended The University of Texas at Austin. Dr. Zepeda received his medical degree at the University of Texas at San Antonio Health Science Center in 1974. He completed obstetrics and gynecology residency at Baylor College of Medicine in Houston in 1978.

Dr. Zepeda maintains an academic appointment as clinical associate professor at Baylor College of Medicine, where he is involved in residency and medical student education. He's recognized in the Texas Medical Center for his expertise in gynecologic surgery, including pelvic reconstruction, DaVinci Robotic Surgery and advanced laparoscopic and hysteroscopic procedures. He is board-certified by the American College of Obstetrics and Gynecology and has voluntarily recertified numerous times.

He has been awarded the Distinguished Surgeon of the Year in Houston and has been voted among the Best Doctors of America. In addition to teaching, Dr. Zepeda has been involved with National Scientific Meetings in OB/GYN and has published on laparoscopic surgery. He is actively involved in continuing medical education through the medical center and national meetings in the specialty as well as numerous professional societies.

He and his staff are fluent in Spanish and are able to accommodate the needs of Latin and Hispanic patients. Dr. Zepeda's hobbies include sports and reading, but his passion is spending time with his family, wife and eight children.

Can I skip my period safely?

Dr. Zepeda has been instrumental in helping Texas Children's Pavilion for Women achieve accreditation as a Center of Excellence in Minimally Invasive Gynecology. This accreditation is awarded by the Surgical Review Corporation, an internationally recognized patient safety organization.