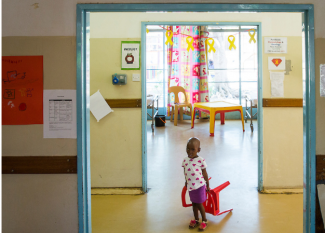 Botswana is a landlocked country located in southern Africa with a population of over 2 million people. Global HOPE has employed physicians from Texas Children's Cancer and Hematology Center at The Princess Marina National Referral Hospital in Gaborone, Botswana for over 10 years. Since that time, patients diagnosed at Princess Marina Hospital tripled and survival rates have increased by 50 percent.

The Republic of Malawi ranks among the world’s most densely populated and least-developed countries with 67% of its 17.9 million citizens under the age of 24 years. Global HOPE has employed physicians from Texas Children's Cancer and Hematology Center at Kamuzu Central Hospital in Lilongwe since 2010. In 2016, the first patient diagnosed with leukemia at Kamuzu Central Hospital was successfully treated by our physicians.

Uganda has an estimated population of 35 million and is ranked 163 out of 188 on the 2015 United Nations Development Programme Human Development Index. The Uganda Cancer Institute (UCI) is the only center in Uganda that provides cancer care and treatment for adults and children and has only one pediatric oncologist. Each year, the Uganda Cancer Institute diagnoses approximately 350 to 700 new cases of childhood, over 40% of all new patients that they see annually.

Global HOPE partnered with Muhimbili University of Allied Health and Sciences of Dar es Salaam. Together, we will collaborate on research on splenomegaly in sickle cell disease.

We partnered with The Liberia College of Physicians and Surgeons to improve resources, strategies and research to address pediatric sickle cell disease

Angola. Our participation in the Angola Sickle Cell Initiative (ASCI) helped to create and implement a comprehensive sickle cell disease initiative in Angola, a country in southwest Africa.