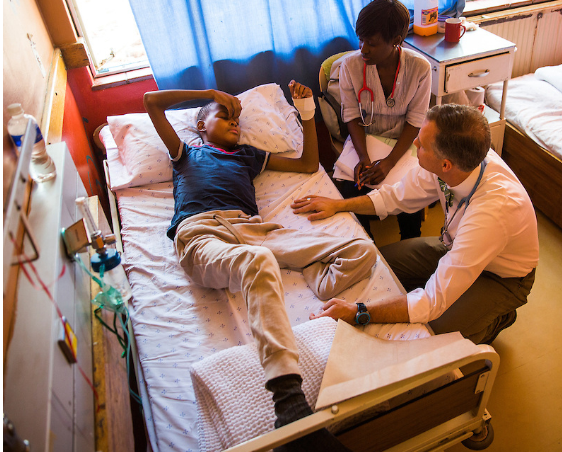 In developed countries, including the United States, Canada, and those in Western Europe, the progress made in treating childhood cancer over the last 50 years has been one of modern medicine’s true success stories.

In the United States, more than 80 percent of children survive. Worldwide, the survival is not nearly that high. An estimated 175,000 children under the age of 15 get cancer each year, and more than 100,000 of them will die because they don’t have access to adequate care.

In sub-Saharan Africa, the childhood cancer mortality rate is estimated to be as high as 90 percent. In some countries, there’s essentially no available care for children with cancer. No diagnoses, no chemotherapy and no palliative measures.

This is due in large part to an inadequate health care infrastructure and a paucity of physicians, nurses and other health care workers trained to provide the complex care childhood cancer patients need.

At Texas Children’s, we believe our responsibility to care for children doesn’t begin and end with those who are able to come here. We have an obligation to seek out the children and future clinicians who are least likely to come to us, because that’s where we can have the greatest impact.

In the United States and other developed nations, the dramatic improvement in prognosis results from a number of factors, including: earlier disease recognition and improved diagnosis, the development of highly effective chemotherapy, better antibiotics and supportive care, and the implementation of coordinated multi-disciplinary care among all of the necessary pediatric specialties (i.e., hematology-oncology, surgery, radiation therapy, critical care, infectious disease, nursing, and pharmacy).

Access to quality care is often late and typically these children die without their parents or clinicians ever knowing the diagnosis. This is combined with a healthcare workforce that is not trained to treat these diseases, lack of access to modern-day medications, and a generally sub-standard healthcare infrastructure.