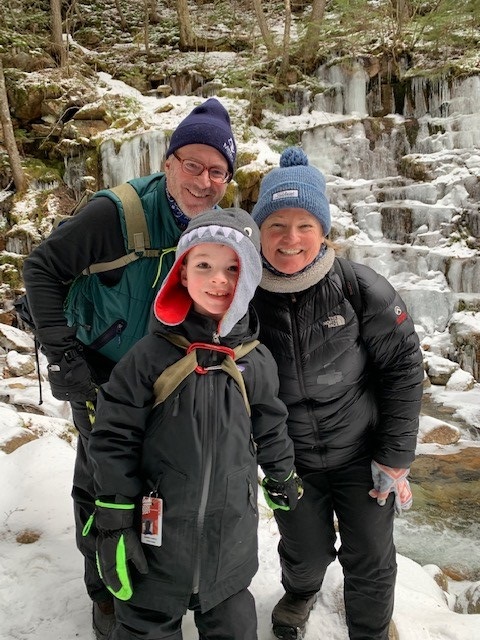 Photo courtesy of the Carrolls

Rebecca Carroll describes her 7-year-old son, Warren, as a social and adventurous child who loves the outdoors. He enjoys hiking, swimming and snow skiing. When the family visited Houston, he became a huge fan of the Houston Zoo. One of his fondest moments was feeding lettuce leaves to the giraffes.

“He enjoyed the animals and the great dinosaur exhibit,” Rebecca recalled. “It’s amazing to see how far our son has progressed and the trajectory of his progress is heartwarming. When I was 30 weeks pregnant, a fetal MRI was performed due to concerns on a routine ultrasound. There was strong evidence to suggest that our son would have tuberous sclerosis, a rare autosomal disease that causes benign tumors to grow in the brain and other parts of the body. There was a good chance he would develop seizures. While it was difficult news to hear, as his parents, we’d do whatever we could to help our son.”

After Warren was born, his neurology team in Boston, Massachusetts (where the family lives) monitored his condition closely. He had periodic electroencephalograms (EEGs) and took medication for seizures. When Warren had a bad cold or flu, he would have multiple seizures where he had to be hospitalized.

“When he wasn’t ill, Warren’s seizures were mostly mild,” Rebecca said. “He did not have seizures everyday, but if you attached electrodes to Warren’s scalp, you could see the abnormal brain activity but the symptoms were not noticeable yet. As he got older, the clinical signs emerged. Warren would lose his attention more often and he had trouble engaging in conversation. Several tests were conducted on Warren to identify the origin of his seizures and to see if surgery was an option for him. After we learned our son was a good candidate for epileptic brain surgery, his neurologist in Boston referred us to Texas Children’s Hospital.”

In February 2019, the Carrolls came to Texas Children’s to meet Chief of Neurosurgery Dr. Howard Weiner and neurosurgeon Dr. Daniel Curry, to map out the best surgical treatment plan for Warren.

“While our son had always received exceptional care, we admired the collaboration between Boston Children’s and the neuroscience team at Texas Children’s,” Rebecca said. “From day one, Dr. Weiner and his team wanted to figure out how to make the surgery successful for Warren. It wasn’t a matter of should we do the surgery. It was how can we do it successfully to improve the outcomes for this child. Our journey at Texas Children’s was a continuation of working with amazing people to help our little boy.”

To pinpoint the precise location of his seizures, Warren underwent a minimally invasive surgery called a stereo electroencelphalogram (EEG), where small holes are drilled into a patient’s skull and electrodes are placed in the brain for monitoring. With the assistance of a guided robot, Warren had 26 electrodes placed in his brain and spent 10 days in the Epilepsy Monitoring Unit. After analyzing the EEG results, Weiner, Curry and the Carrolls worked with an epileptologist to determine the best course of action.

“When medication fails for patients with tuberous sclerosis, the next consideration is epilepsy surgery,” Weiner said. “After the stereo EEG, we realized Warren had two active seizure foci in his brain. Once we identified the origin of his seizures, we targeted these specific regions of his brain. We treated a small lesion in Warren’s brain with laser ablation. The other area of Warren’s brain was too large and broad to be treated with a laser. A week later, we performed a craniotomy and removed brain tissue that was the source of his epileptic activity. The tissue was sent to the NRI at Texas Children’s for research studies.

Laser ablation surgery, an innovative surgical technique pioneered by Curry at Texas Children’s, uses a real-time MRI-guided thermal imaging and lasers to destroy lesions in the brain that cause epilepsy and uncontrollable seizures. The craniotomy and resection is a more traditional approach where the patient is awake yet sedated so neurosurgeons can monitor a patient’s reflexes and reaction when brain tissue needs to be removed.

Since his three surgeries in July and August 2019, the Carrolls says their son is doing amazingly well.

“Warren has not had a seizure in over two years and we were able to successfully eliminate two of his three medications,” Rebecca said. “In addition, Warren’s language skills have improved and he is more engaged in conversations. He is able to sleep through the night which is something he could not do prior to his surgeries. We are grateful to our doctors in Boston and the neurosurgery team at Texas Children’s for taking the time to review Warren’s case and determine the best surgical approach to treat our son’s seizures. I am thankful to everyone who was involved in Warren’s care. He’s making sweet strides.”

As an international referral center for patients with rare to complex brain disorders, patient families from across the country and around the world come to Texas Children’s Neuroscience Center because of our team’s multidisciplinary care and expertise in treating for the most difficult to treat neurological disorder.

“Tuberous sclerosis can be challenging to treat because there are multiple lesions that can occur on both sides of the brain,” Weiner said. “As a result, many of these children had not been considered candidates for brain surgery. However, much research and work has been done to dispel that notion. Warren’s case represents the cutting edge surgical treatment options that are currently available to treat children with tuberous sclerosis. We have made great strides in improving outcomes for patients like Warren.”