Heat strokes, cramping and sunburns: How to stay safe in the summer heat
A life-changing opportunity to help a patient with strabismus improve eye alignment
Swimmer’s ear: How to keep ear infections at bay this summer
Diabetes research: Reflecting on our past successes to create brighter futures
Schroth Therapy: A nonsurgical treatment approach for mild to moderate scoliosis 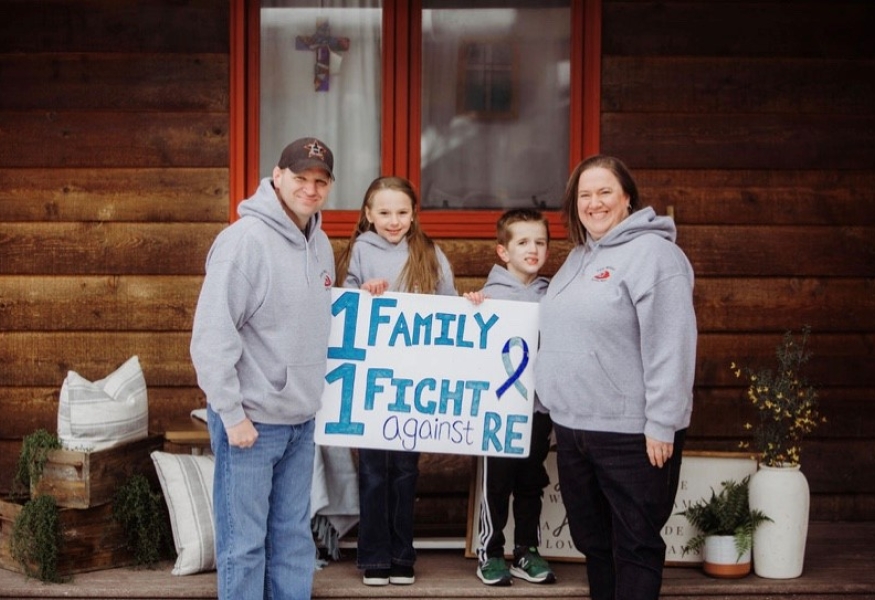 When you ask Tim and Julie Weekley’s 7-year-old son, John, what he wants to be when he grows up, he’ll be quick to tell you, “I want to be a firefighter.” Since he was a little kid, he’s always wanted to fight fires like his dad, who is a firefighter in Soldotna, Alaska. But, for the last three years, their home away from home has been at Texas Children’s, where their son is receiving treatment for a rare brain disorder.

“When our son was born, he was the picture of good health,” Julie said. “But, right before his fourth birthday, we noticed some very strange behaviors. One day, John was playing outside, and when we called him in, he made it all the way to the door and he couldn’t walk anymore. He fell to the ground and he could not get up. So, we rushed him to the hospital. Doctors couldn’t pinpoint what was wrong. A week later, we took him back to the ER after he had multiple seizures. His condition was getting worse.”

Since there was only one pediatric neurologist in the entire state of Alaska, the Weekleys expanded their search outside their state. During their online search, Tim’s mother stumbled across a phone number for the Epilepsy Monitoring Unit (EMU) at Texas Children’s. The Weekleys called the number to schedule an appointment. Little did they know, this would mark the beginning of their journey at Texas Children’s.

“On Friday, April 27, 2018, we made the call, and thankfully, there was one appointment available for the following Monday,” Tim said. “Later that evening, my wife, son and our daughter flew from Anchorage to Houston while I stayed back due to an injury. When they arrived at Texas Children’s on Saturday, John was rushed to the emergency center and admitted to the EMU on the same day. He underwent tests to determine the cause of his seizures and he was monitored closely by his care team. When I rejoined my family in Houston at the end of May, my wife and I met with Drs. Sarah Risen and James Riviello, who told us our son appeared to have Rasmussen’s Encephalitis (RE), which we never heard of before.”

Rasmussen’s Encephalitis (RE) is a chronic inflammation of the brain which can worsen over time. It typically affects one side of the brain and causes severe episodes of epileptic activity. Children with RE may experience permanent brain damage, loss of motor skill and mental deterioration. RE is very rare with an estimated 200 to 500 cases worldwide, and affects children between the ages of 2 and 15.

Less than a month into John’s seizure episodes, Dr. Riviello discussed with the family the possibility of brain surgery. After an electroencephalogram (EEG) identified the origin of John’s seizures, the family was referred to Dr. Daniel Curry, director of functional neurosurgery and epilepsy surgery at Texas Children’s. After doing their own research, the Weekleys were grateful Dr. Curry, a recognized pioneer in epilepsy surgery, would oversee their son’s neurosurgical care. They knew John was in the right place.

“For the next three years, my daughter and I flew back and forth to Houston while my wife and son stayed in Houston at the Ronald McDonald House so John could go to his follow-up appointments at Texas Children’s,” Tim said. “Over the next five months – from June to Oct. 2018 – John had five procedures including laser ablation and another surgery to remove his right temporal lobe where most of the electric activity occurred. While this surgery helped, John’s seizures returned. After meeting with Dr. Curry and his team to discuss John’s treatment plan, they said John would be a good candidate for a functional hemispherectomy. They told us this surgery is recommended for patients with severe seizures that impact only one side of the brain.”

On Oct. 15, 2018, Dr. Curry performed a functional hemispherectomy where he disconnected the right side of John’s brain – where the seizures originated – from the healthier, left side of his brain. While the surgery stopped John’s seizures for almost a year, there were a few challenges he encountered. Since the right side of the brain controls movement to the left side of the body, John lost half of his vision, his speech was affected and he lost most of his mobility in his left hand, arm and leg. To restore function to these parts of the body, John went through months of physical, speech and occupational therapies.

“While our son was seizure-free almost a year after his surgery, his seizures came back,” Tim said. “Dr. Curry’s approach was to treat the seizures first using minimally-invasive techniques before considering a more invasive treatment option. A year after his functional hemispherectomy, John had laser ablation targeting additional sites in his brain. When that didn’t work, Dr. Curry said the only way to help John developmentally was to remove the entire right side of John’s brain. If we remove it, we eliminate the possibility for any connections to continue that could potentially impact the left hemisphere of his brain. We supported this decision.”

John had his seventh surgery on April 30, 2021. It’s been over a month since his surgery, and he is doing very well. Currently, he is receiving outpatient intensive physical and occupational therapy so he can continue to build up his strength, function and mobility. Since his surgery, he hasn’t had any seizures. On June 18, he celebrated his seventh birthday!

“While this journey isn’t easy for our family, traveling 4,200 miles away from our home in Alaska to Texas Children’s was the best decision we made,” Tim and Julie said. “John is not just our hero, but he’s a hero to a lot of people. Texas Children’s is his family. Since John has been here for a while, everyone knows him by name from the valet staff who give him high-fives to the housekeeping staff and to his amazing physicians, nurses and physical, speech and occupational therapists who never gave up on our son and took care of him like he was their own child. At 7-years-old, John still wants to be a firefighter. Given his illness, we don’t want to say his dreams can’t be possible. There is definitely something for him to do in the fire service. We hope our son’s story inspires other families in similar situations. Texas Children’s gave our family hope. When you have nowhere else to turn to, this is a place of miracles and a place of hope.”

Click here to learn more about our Neurosurgery programs. Click here for more information about Rasmussen’s Encephalitis and the different ways we treat this rare, pediatric neurological condition.