Sade’s face lit up with a bright smile when her family’s attorney, Jared, greeted her at Texas Children’s Hospital West Campus and praised her beautiful dress and her shiny, festively colored nail polish.

“Thank you,” she beamed, holding out her fingers. “It’s for the holidays.”

Now 24 years old, Sade was a patient at Texas Children’s when she first met Jared. Her parents, Audrey and Anthony, needed legal assistance for Sade, who has Down syndrome and whose medical complications and overall condition made it necessary for them to seek guardianship. Legal guardianships allow parents to continue making health care decisions for their children, with special needs, after they turn 18. Because of COVID, Sade’s case had been delayed.

“A social worker at Texas Children’s told us about the Medical Legal Partnership (MLP),” Sade’s mother, Audrey, explained. “And then Jared escorted us through the legal system — he made the transition really smooth for us. And because it was in the midst of COVID, it was a really unique situation. With Zoom and virtual help, he was able to make sure it all came together properly.”

Even in the best of times — and certainly during the COVID-19 pandemic — many patients and their families face significant obstacles to achieving maximum health. In addition to medical  concerns, it’s not uncommon for complex legal issues, like Sade’s, to arise. Often, it takes an attorney’s help to address these issues. And that’s why, in 2012 — with philanthropic support from generous donors including Walmart, which made the first gift — Texas Children’s entered into a Medical Legal Partnership (MLP) with the Houston Bar Association’s volunteer lawyers program (HVL), the program through which Sade’s case was eventually referred to Jared. 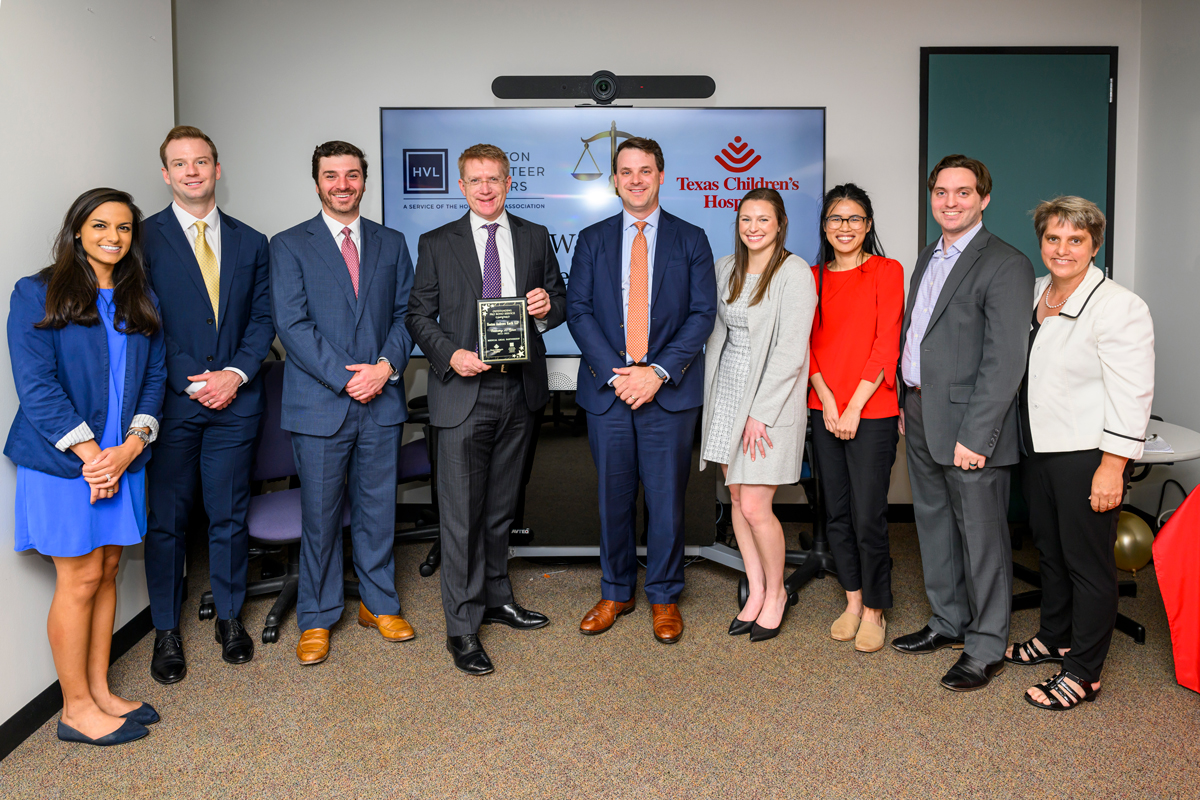 This month, Texas Children’s is celebrating the 10th anniversary of its MLP. To share in the celebration — and to share their story — Sade and her family came to the West Campus with Jared.

“I just want to take this opportunity to say thank you,” Audrey said, turning in her chair to face Jared directly. “Everything you've done to help our family, you made it really smooth for us. Even in the midst of COVID — with everything that the whole world was going through — you took the time…”

Audrey paused, collecting herself. “I just wanted to say…thank you.”

“It’s my pleasure. Believe me,” Jared said. He smiled and spoke about his own family. “Just speaking from experience, I have a son with special needs as well. He’s been coming to Texas Children’s since he was just days old in the NICU. And so I know what Audrey and some of the other families are going through. Being able to help is just the biggest reward.”

Texas Children’s is committed to improving health care equity and access for the underserved, and the MLP program offers critical assistance to low-income patients and their families, addressing not only their medical needs but also the larger context — social, legal and economic issues — that can have such a huge impact on health care outcomes. 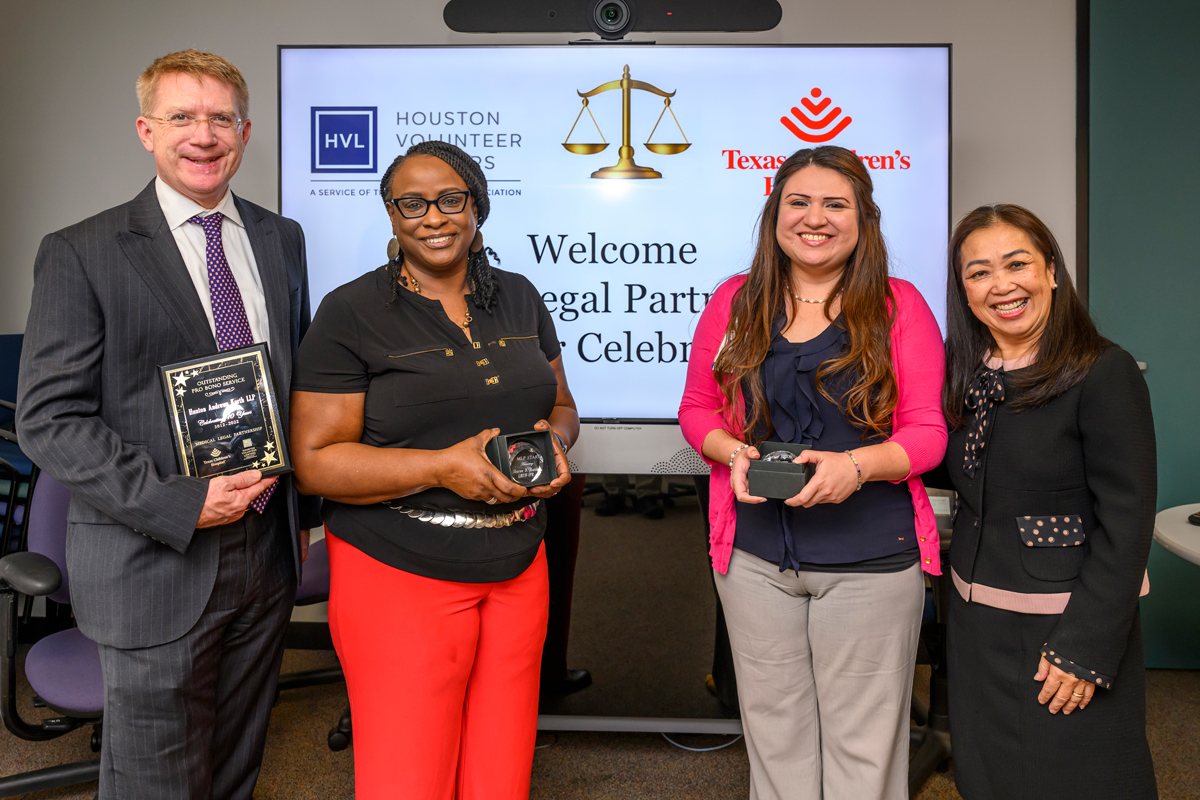 Endorsed by organizations such as the American Bar Association and the American Medical Association, MLPs truly make a life-changing difference. They serve as a unique health-care delivery model that brings physicians and lawyers together to tackle health issues that have legal, rather than medical solutions. They also give health care teams the ability to help address adverse social conditions that can so often complicate the lives of their already-ill patients. Through the MLP, dedicated staff attorneys provide legal advice and much needed representation, as well as obtain assistance from outside pro bono lawyers, like Jared, when necessary.

Along with legal guardianships, there are many problems that MLPs address. Another frequent issue is related to housing. In 2013, for example, the MLP team at Texas Children’s began working with the family of a 13-year-old girl diagnosed with an intellectual disability, together with autism, asthma and chronic lung disease. The family, living in their home through a Section 8 housing voucher, was suddenly told they had to move. Since they were given no notice, they needed more time to find a new home.

The MLP attorney at Texas Children’s was able to intervene, and after negotiating, the family was permitted to stay in their home while they searched for new housing. During their search, however, they faced discrimination. A prospective landlord claimed that, as a rule, he doesn’t rent to “their kind” because, as he put it, “Children with disabilities damage property.” The MLP team filed a housing discrimination complaint on the family’s behalf. As a result of the legal complaint, a monetary settlement was reached.

More recently — in June 2021 — a primary care physician asked a social worker at Texas Children’s Pediatrics Gulfgate to contact a patient’s mother because of concerns about the family’s living situation; the mother’s 16-month-old child was having difficulties breathing and having issues with a constantly runny nose as a result of mold in the apartment. When an MLP attorney met with the family, mold was reported on the ceilings and the cabinets — it had even grown on their clothing. Additionally, the family had to throw out a crib and a couch because of mold. The mother was a patient at The Center for Children and Women. She had a history of asthma and was likewise suffering adverse effects from the mold. When she alerted the landlord, however, he simply painted over it. Naturally, the mother wanted to move, but her lease didn’t end until February 2022. With help from the MLP attorney, a reasonable accommodations letter to terminate the lease was sent on their behalf, and the family was finally able to find safe housing.

These are just a few examples. In 2021 alone, over 185 new cases were opened by the MLP team at Texas Children’s. Jared’s law firm, Hunton Andrews Kurth LLP, was one of the original participants in the MLP when it was formed 10 years ago and has handled over 340 cases since they got involved.

By day, Jared is a corporate finance lawyer. When asked about his pro bono work for Texas Children’s, he smiled.

“It’s been amazing. Just to put it in a word,” he said. “The fact that Texas Children’s can make this connection with us, and other practicing attorneys around town, is just incredible, because it’s a vital need.” 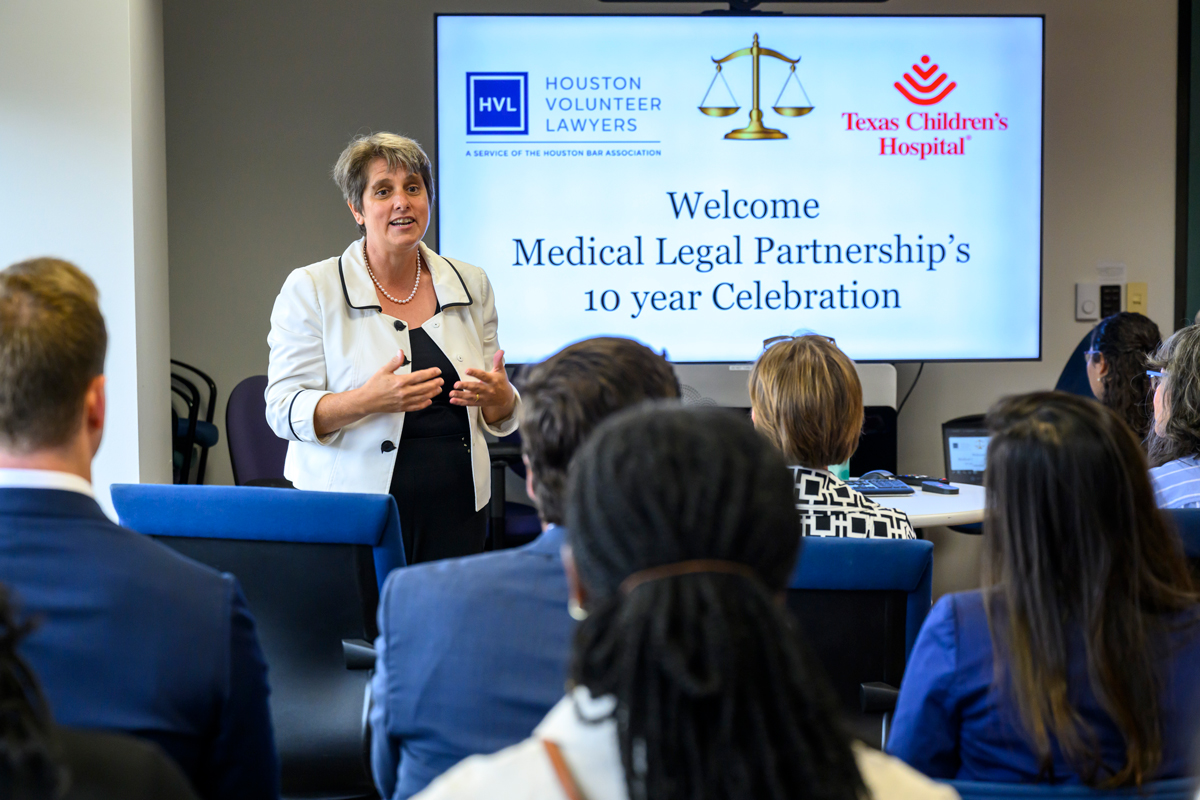 Texas Children’s is proud to support Sade and her family and to join them in celebrating the 10th anniversary of its MLP program.

Make a gift to the MLP Program at Texas Children’s to help other patients and families like Sade’s.