Sophie’s story: Regaining my life back after venous malformation diagnosis 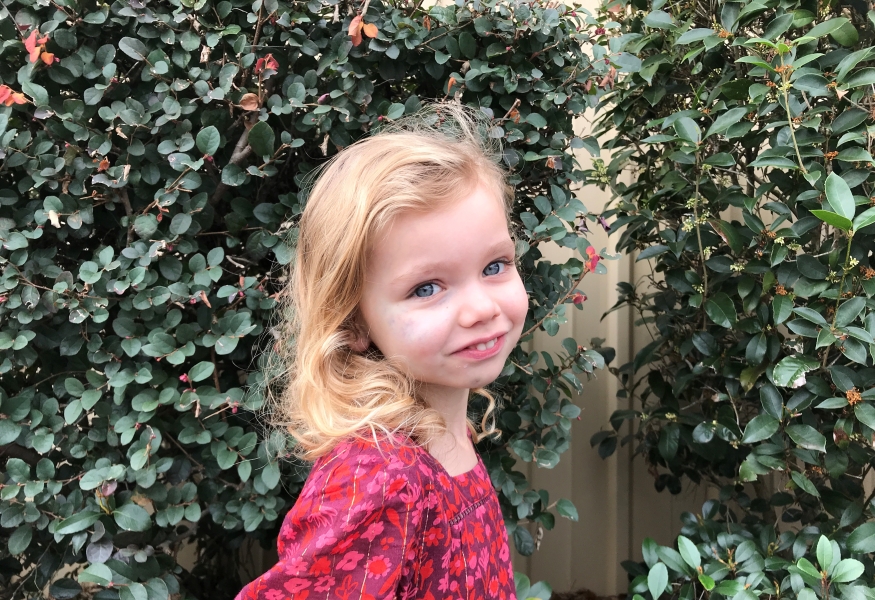 In 2016, Rachel and Scott Hewitt’s third child, who they describe as “spunky,” made her appearance much in the same way she lives her life – fast and fun. Their daughter, Sophie, was beautiful and perfect. But, within minutes of her birth, they noticed a small red-ish, purple mark on her cheek. When they asked the nurse about it, the nurse told them their daughter likely came out so fast she was bruised from the birth. Perplexed, the Hewitts accepted the answer and continued loving on their newborn.

The next morning the pediatrician’s office descended on the hospital with medical books in tow. Initially, they thought the mark was a port wine stain, but they said only time would tell. They ran test after test and finally declared Sophie ready to go home. Over the next few weeks, her marks darkened and the pediatrician’s office kept a close watch on it. The Hewitts were eventually referred to the only pediatric dermatologist in their state. They hoped this visit would provide them with answers to Sophie’s condition.

“After waiting several weeks, our 6-week-old daughter had her first appointment with the pediatric dermatologist,” Rachel said. “Sophie’s diagnosis was quickly confirmed as being a port wine stain and she was scheduled for pulse dye laser treatments. The treatments lightened the red marks on her face, but they uncovered large areas of blue veining the treatments did not have any effect on. Sophie’s dermatologist explained it was just part of her port wine stain and when she was old enough to give consent, around age 10, we could choose to use deeper lasers on those areas at that time.”

The blue veining continued to darken at an alarming rate. It wasn’t until Sophie was about 11-months-old that the Hewitts discovered the deep purple veining in the inside of her cheek. Rachel took several pictures and sent them to Sophie’s dermatologist, who presented Sophie’s case to a panel of doctors of different specialties. An interventional radiologist asked to see her. After multiple appointments over the next several weeks, which included an MRI and ultrasound, the radiologist said the veining was too small for him to do anything with and referred Sophie back to her dermatologist. The Hewitts waited four months to be called in for a follow-up visit. When they didn’t hear back, they finally called Sophie’s dermatologist.

“When Sophie was 18-months-old, we had one last appointment with her pediatric dermatologist,” Rachel said. “I showed him the timeline of photographs highlighting the progression of Sophie’s blue veining. I was determined her doctor would recognize what we had clearly seen over the past 18 months – a clear pattern of growth and darkening of the veining on her face, neck and in her mouth. Unfortunately, after seeing all of the photographs, we were told it “didn’t look that bad” and “luckily she was a girl and could wear makeup when she was older.” At this point, we were incredibly frustrated. We had seen several doctors at two hospitals and after countless appointments over 18 months, we were no close to a true diagnosis than we were the day she was born. We were frustrated no one could help our daughter.” For the next year, Rachel threw herself into internet research. She joined the Birthmark Support Group on Facebook that was run by the Vascular Birthmarks Foundation and showed Sophie’s picture timeline to every doctor she came in contact with. Through her research, Rachel believed Sophie primarily had a venous malformation and not a port wine stain. As Rachel researched the top clinics in the country that specialized in venous malformations, she found the amazing team of doctors in the Vascular Anomalies Center at Texas Children’s Hospital. Immediately, she scheduled Sophie for her first clinic appointment.

“When we arrived at Texas Children’s, it was unlike any medical appointment we had been to up to that point,” Rachel said. “The doctors greeted us in the hallway and seemed familiar with Sophie and her case history. Within 45 minutes, we met with a pediatric dermatologist and an interventional radiologist. Sophie then received a detailed ultrasound that was immediately explained to us by the radiologist.  We were asked to go and grab lunch and return in an hour so they could consult a hematologist and find out if Dr. Rosenberg, one of the ENTs, was available to come down to the clinic to see Sophie.”

An hour later, the Hewitts met with Dr. Tara Rosenberg, surgical director of the Vascular Anomalies Center, who examined Sophie. Minutes after examining her, Dr. Rosenberg diagnosed Sophie with a venous malformation and laid out a treatment plan for her. Rachel said she cried tears of joy after her daughter’s diagnosis. She was so relieved to finally get a name for her daughter’s medical condition.

“I know it may seem like an odd reaction, but we had gone through numerous appointments for the first two-and-a-half years of Sophie’s life with no concrete understanding of what she was suffering from,” Rachel said. “In a matter of four hours in the Vascular Anomalies Center at Texas Children’s, we saw three specialists and had a firm diagnosis.  As a parent, the peace of mind that comes with finally having full faith and trust in your child’s doctors is worth more than I can possibly put into words.”

Just after her third birthday, Sophie underwent her first surgery with Dr. Rosenberg where she focused on treating the veins outside of Sophie’s skin. Rachel said her daughter recovered from the surgery pretty quickly and was playing on the playground 36 hours later. Throughout Sophie’s treatment, Rachel noticed how cautious Dr. Rosenberg was when treating Sophie to ensure the least risk of scarring. The difference in the color and size of Sophie’s veining was evident within one week of her surgery. To date, Sophie has undergone four surgeries. With every surgery, her venous malformation has gotten lighter and the veins have remained smaller. The Hewitts say they are thrilled to have a plan that is working.

“The results of Sophie’s surgeries are wonderful and very encouraging for limiting the severity of Sophie’s future surgeries as an adult,” Rachel said. “We are very grateful to have found Dr. Rosenberg and the Vascular Anomalies Center at Texas Children’s. Sophie’s condition is rare considering the location and sizing of her veining, but we know our daughter is being treated by the best medical team available.”

Click here for more information about Texas Children’s Vascular Anomalies Center and learn how our multidisciplinary team of experts provides state-of-the-art treatment for patients with these disorders.