Sarah's story: Flipping her way back into the gym 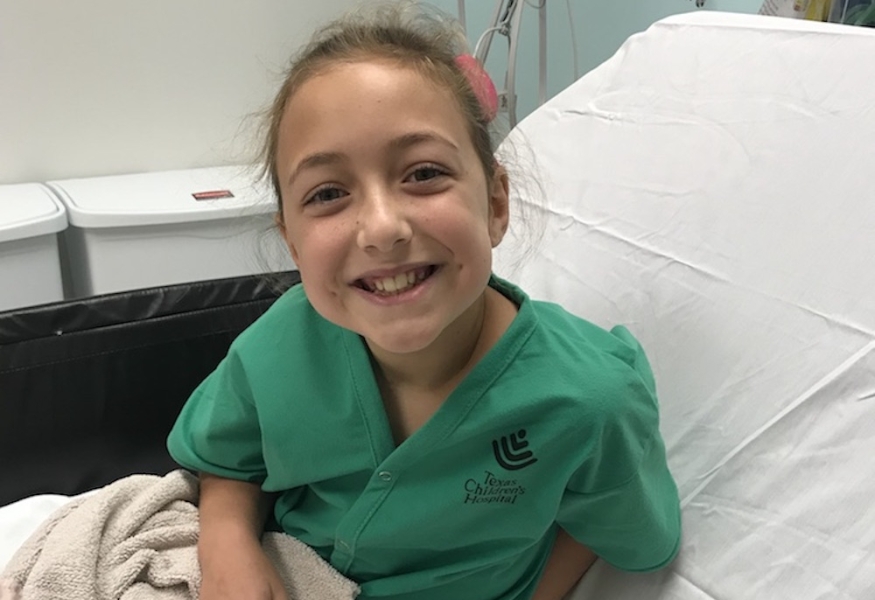 My name is Sarah, and I’m a 10-year-old gymnast from Spring, Texas. I love everything about gymnastics – the practices, conditioning, team culture, competitions and medals … just about everything! Well, aside from the injuries. Turns out, one minor injury would send me to multiple physicians and physical therapists and cut my gymnastics activities short for an entire year.

Mid-way through my first season of competitive gymnastics, I injured my knee during a competition. After the vault rotation, my knee just didn’t feel right. It wasn’t an intense, sharp pain, but it was noticeably sore. I mentioned the soreness to my mom, but we didn’t think much more of it. I continued to attend normal workouts, but the pain would intensify by the end of practice. Once a month went by, my mom started to notice my hesitation when vaulting. She wondered if the knee pain was contributing to this hesitation, and she made an appointment to have it checked. During this appointment, in April 2017, I was diagnosed with a left patella sleeve evulsion fracture and ordered to rest my knee for three weeks. As an energetic gymnast, it was difficult for me to sit still and completely rest my knee as instructed. When three weeks went by, there was no change, but my doctor didn’t seem concerned. We made an appointment with a new orthopedic specialist for a second opinion. He confirmed the original diagnosis and recommended a full leg cast to stabilize it and allow it to heal. I spent the entire month of May in a full leg cast. Though I was restricted on what I could do in the gym, I continued to attend practice to work out my upper body. I was hoping to return to full workouts once my leg was healed so I could compete in the approaching fall season.

When my cast was removed, my knee felt better, but I immediately felt pain in my ankle. I was put in a knee brace and ordered to go through physical therapy to slowly regain range of motion in my knee. My physician and physical therapist agreed the ankle pain would subside with time and rehabilitation, and it was just a result of being casted. I did physical therapy two-three times a week until mid-July when my therapist released me. When I again reported the persistent ankle pain had not subsided, my physician and therapist discounted it and promised healing with continued strengthening at home.

My orthopedic referred me to an orthopedic ankle specialist, a colleague of his, but my pain didn’t subside as we continued to follow up with this new physician. He initially diagnosed the pain as Achilles tendonitis. When I didn’t feel any change after resting my ankle for two weeks, he placed me back in a cast with crutches, instructing me to not walk on it for another two weeks.

Hurricane Harvey devastated Houston just as my two-week rest period neared its end, forcing my orthopedic specialist to close his office. We were approaching a planned family trip to Disneyland, and I needed my cracked cast to be replaced. Out of desperation, my mother reached out to Texas Children’s to see if they could recast my foot to get us through our trip. We ended up making an appointment with Dr. Indranil ‘Neel’ Kushare, an orthopedic surgeon at Texas Children’s.

Once he completed a quick examination and reviewed my X-rays, Dr. Kushare confirmed I did not in fact have tendinitis. He diagnosed me with ankle impingement syndrome, and said a full cast wasn’t necessary. Dr. Kushare put me in a walking boot and ordered me to start physical therapy once we returned from our trip. He explained how physical therapy is sometimes enough to correct the problem, but offered a solution if it wasn’t. This involved an easy arthroscopic surgery to remove the built-up tissue that was being pinched behind my ankle and causing pain.

We went on our family trip, and my boot kept the pain under control. Upon returning, I started more physical therapy. Some days the pain was more manageable, but it never completely went away. By mid-October, we decided to pursue surgery as the next step. I was discouraged in the gym, and ended up walking away from the sport I loved. I had spent the past six months attending practices where I couldn’t use my legs, and I was sidelined from competing. I was just ready to finally be free from this pain for good.

I went to Texas Children’s on Oct. 24 for surgery, and I was ready to put this injury behind me. It was a quick procedure, and I went home the same day to begin my recovery. Once the stitches were removed and I was able to put my tennis shoes on, I could immediately tell the pain was finally gone. There was a bit of soreness, of course, but the ankle pain that had been plaguing me for the past five months disappeared. I spent the next four-five months working with my physical therapist to strengthen not only my ankle, but also my entire leg that had become so weak from lack of use.

This past January, I was ready to return to the sport I love so much. I found a new home gym, and I finally felt encouraged again. I was initially under restrictions from my therapist, but with her help, we’ve worked to get it all figured out. I’ve spent the summer training 12-13 hours a week without restriction and most importantly, without pain! I’m on my way to compete again this fall! I can’t thank Dr. Kushare and Texas Children’s enough.