From palm to fingerprint, a moment to hold hands 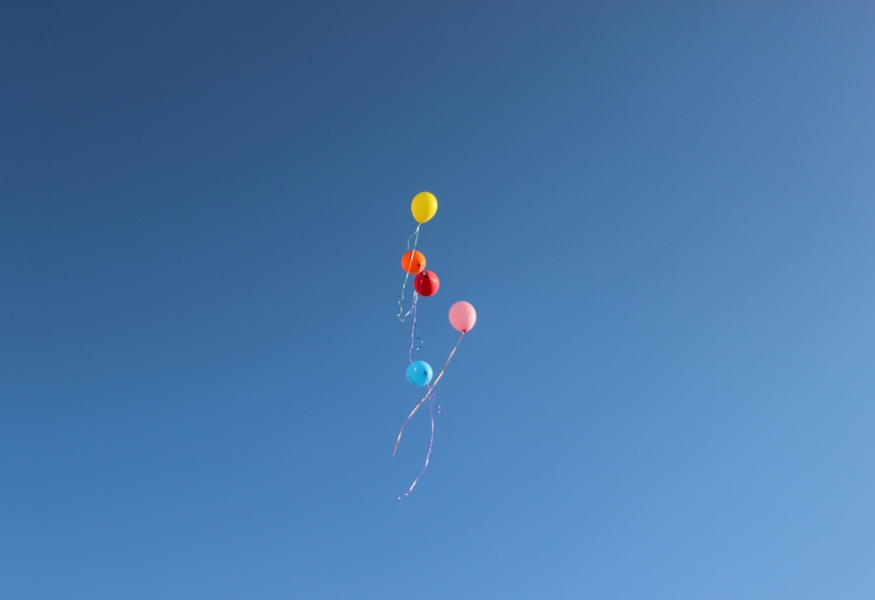 His father sat in a chair across the room; a few floating balloons bunched together in the nearby corner. I remember kneeling on the floor in front of him, holding his hand in mine. His mother was sitting on the couch next to us. She kept looking over at her son in the hospital bed, speaking to him in Spanish. “Mi amor” was the only part I understood. She said it to him multiple times, as if it were his name.

I knew the boy – a little friend of mine in a big hospital filled with lots of other little friends. He spent a long time at Texas Children’s fighting cancer. I spent some of that time with him, trying to fill it with fun and play, to help distract him from some of the unpleasant things. This is my job as a child life activity coordinator, to plan as much fun and play as possible to distract our little friends from why they’re here in the first place.

On this particular day – Oct. 31 – I was with my colleague Alyssa DeMoss, a child life specialist for pediatric leukemia and lymphoma patients. We were filling the time with a handprint art project, trying to pretend everything was OK. As if the walls around us weren’t crashing down on this family. As if this was the kind of art project done in school or the kind I would use with my daughters at home. Except it wasn’t.

I held his father’s hand in my own and gently brushed his palm with orange tempura paint that was pooled in a paper plate on the floor next to me. When his palm was covered, Alyssa and I pressed it down on one side of a white canvas board. Then, I pulled wet wipes from the bag beside me and carefully cleaned off the remaining paint. We didn’t say anything to each other.

We moved over to Mi Amor’s mother, and I held her soft hand in mine. I brushed green paint onto her palm, and when it was completely covered, Alyssa and I pressed it onto the other far side of the same canvas board. As it is in these moments of reverence, we exchanged no words. I wiped away the excess paint in silence, cleaning her hands as she watched.

We moved over to the hospital bed. Their young son was lying there, looking at us. Alyssa and I talked to him, but it was difficult for him to speak back. It was Halloween, so I was dressed like a minion and Alyssa was Jessie from Toy Story, resembling the characters we chose for the holiday spent working at a pediatric hospital.

We talked to Mi Amor about Halloween. We talked about other things, too. Things that didn’t really matter, but made it feel like there was air in the room. Or, maybe our banter did matter and possibly comforted him. I don’t know for sure. I held his little hand and started painting it light blue. I brushed every little line and crevasse; every finger, uncurling each one as I gently rolled the brush from palm to fingertip.

When his hand was covered, Alyssa and I pressed it onto the canvas board in the middle, between and slightly overlapping the prints of his parents. I gently held down each finger for him, so every line made its impression despite the strength that had left his little hand. Then, I took the wet wipes and cleaned his hand so not a single bit of blue remained.

When the prints were done, we brought the canvas board to the playroom down the hall. Alyssa carefully added a few aesthetic dots of color along the corners. We returned to the family’s room, where Alyssa placed the art piece into the hands of those whose prints covered its surface.

A week later, we found ourselves sitting on a white stone bench outside the hospital with his mother. I was on one side and Alyssa was on the other; each of us had one arm wrapped around her side as her husband went to get their car. The three of us sat there silently alongside a cart brimming with their belongings, a collection of clothes, balloons, toys and personal items from many nights spent in the hospital. But now, it was time to leave. I watched people moving around us and marveled at how the world doesn’t stop even when you think it should.

When her husband returned with the car, Alyssa and I helped pack a few things in the trunk. Four balloons were attached to the cart of departing belongings, and I suddenly noticed one was free, floating up above us. I panicked for a moment, thinking the balloon escaped on its own – that it was important and going to be lost to the wind. But then, I saw Mi Amor’s dad let go of each of the remaining balloons, releasing them into the air. They gently made their way above our heads. I watched them float away. We exchanged hugs, and they drove off.

Over the years, as a working mother of three, I’ve occasionally stopped after work to buy balloons to bring home and surprise my daughters. I hope the balloons add extra memories of happiness during times I’m away from home more often – pushing aside memories of things mommy may have missed.

My work serves as just a short interlude in a long period of struggle in the stories of hospitalized families – stories filled with hope. Some stories end with hope fulfilled, while others have different endings.

I think those stories, the ones filled with greater sorrow, might mean the very most to those of us who find ourselves written in along the way. What a beautiful privilege to appear in the pages of these stories, with even the smallest of parts.

Now Mi Amor’s balloons are memories for me – part of my story. I won’t ever forget watching them float away. But I won’t think about either him or the balloons being gone forever. Like every single one of us who want to be remembered for the good we gave, I’ll remember Mi Amor for his good – his sweetness and innocence, the times we played, listened to the Houston Symphony or decorated a Christmas tree together.

I’ll remember his balloons rising even higher into a blue sky towards Heaven, and happily think of not only my time with him here on earth, this “vale of tears,” but also of our stories possibly merging again when my own balloons rise even higher into the sky – as I’m taken away like him to a far better place.