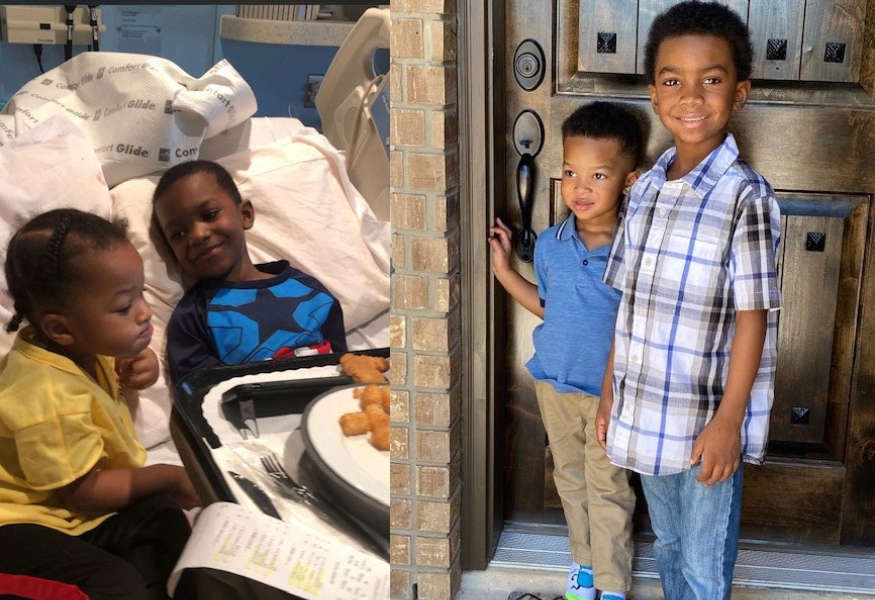 Ronald and Melissa Fontenot are parents to 6-year-old William and 2-year-old Lucas. Besides their brotherly bond, William and Lucas share another special connection. Last September, the family found out Lucas would be the perfect donor match for William, who was in need of a bone marrow transplant.

“Our son, William, was diagnosed with sickle cell anemia two weeks after he was born,” Ronald said. “His hemoglobin levels were low. As he got older, we noticed he was tired and had very little energy, he didn’t have a big appetite and his arms and legs grew swollen. When he was 9 months old, we started giving him hydroxyurea, a prescription medicine that helps prevent sickle-shaped red blood cells from forming by increasing the amount of stable hemoglobin in the blood. Our son also had other complications related to sickle cell anemia even while taking hydroxyurea which included pain crisis, splenic sequestration and acute chest syndrome resulting in hospitalizations. While medications controlled his symptoms, we knew they weren’t a cure. We knew the only cure for sickle cell anemia was a bone marrow transplant.”

In 2018, when Ronald and Melissa found out they were expecting their second baby, the thought of Lucas becoming a potential bone marrow donor for William crossed their minds several times. After doing their own research, they discussed this potential treatment option with their son’s pediatric hematologist, Dr. Michael Gleason, and Dr. Tami John, a bone marrow transplant specialist who are both at Texas Children’s Cancer and Hematology Center. The couple was eager to find out if William would qualify for the bone marrow transplant to treat his blood disorder.

Sickle cell anemia is a chronic, inherited blood disorder in which red blood cells become crescent shaped, making it difficult for them to move through the bloodstream leading to pain and other problems. These cells break down easily and the bone marrow is unable to produce enough new red blood cells to compensate, which causes anemia. Currently, a bone marrow transplant is the only known cure for sickle cell anemia. For a bone marrow transplant to succeed, a closely matched donor must be found. The best donor is usually a matched brother or sister.

To determine if William’s parents or Lucas were potential matches, they were tested to find out which human leukocyte antigens (HLA) they had. HLA is a protein found on most cells in the body including cells in the immune system. The closer the HLA match, the better chance that a bone marrow transplant will be successful. A few days later, the couple received the results for which they were hoping.

“It was exciting news when we found out Lucas would be the bone marrow donor for William, but it was a little bit nerve wracking for us,” Melissa said. “Since we didn’t know anyone who went through the bone marrow transplant process, we weren’t sure what to expect after this procedure. However, my husband and I were hopefully optimistic this transplant would work and possibly cure our son’s sickle cell anemia.”

Once they received confirmation of the HLA sibling match, Ronald and Melissa were referred to Dr. John, who answered their questions and explained the bone marrow transplant process, the preparatory steps that were required weeks prior to the procedure, and what to expect in recovery.

“Prior to the bone marrow transplant, we made sure William’s organs were functioning well to tolerate chemotherapy,” Dr. John said. “Chemotherapy, which is usually administered for eight days, prepares the body to receive stem cells and suppresses the immune system to lessen the chance the stem cells will be rejected. After William finished chemotherapy, he received bone marrow stem cells from his brother via a central line, much like a blood transfusion. Williams also received cord blood the family had preserved after Lucas’ birth. After the stem cell infusion, we waited several weeks for the stem cells to grow and form new blood cells. For the first few months after the transplant, William came to our clinic regularly for medications and blood tests, and occasionally blood transfusions. After a transplant, antibiotics are given to prevent infections until the white blood cell count reaches a certain level and the immune system recovers, which can take months. Transfusion of red blood cells and platelets are often needed after transplant until the bone marrow starts working to produce new blood cells on its own.”

Since William’s bone marrow transplant one year ago – on Sept. 2, 2020 – the Fontenots say William is doing remarkably well. They are grateful to Texas Children’s Hospital and the entire health care team for taking great care of William during his one-month hospital stay while his body recovered from the transplant.

“We had great doctors and nurses who were always there when we needed them,” Melissa said. “Since his transplant, a lot has changed for our family. Besides having a huge appetite, William is very active and a super energetic boy. After the bone marrow transplant, his sickle cell anemia symptoms went away. When we see our boys today, we are so blessed to have them in our lives. We never imagined Lucas would be the one to donate a special gift to his brother. His gift has impacted William and our family in such a positive way.”

Each year in September, Texas Children’s Cancer and Hematology Center recognizes Sickle Cell Awareness Month. Click here to learn more about our Bone Marrow Transplant Program and how we are changing lives every day for children and families with sickle cell disease and other pediatric blood disorders.