Did your newborn receive a hearing screening?
National Donate Life Month: Why you should register to be an organ donor
Developmental surveillance with your pediatrician: When autism becomes a concern
Mallory’s journey back to ballet one year after hip surgery
National Nutrition Month: Incorporating meal planning into your weekly routine 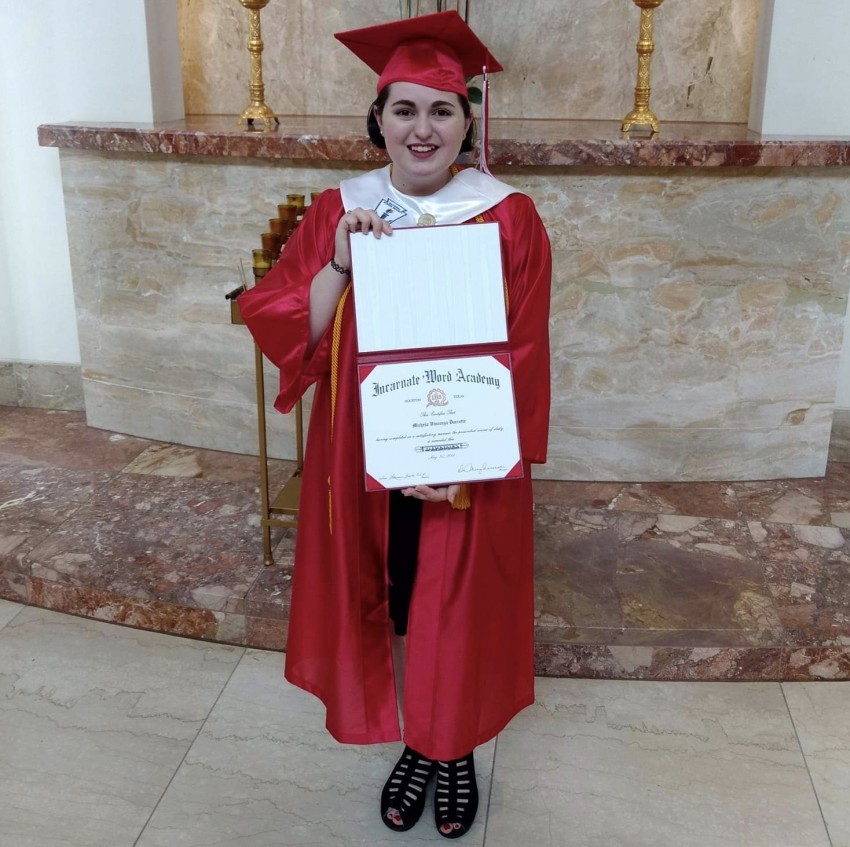 These are the words that spring to mind when you meet Michela Durrette. She’s had a long road and endured a tough-fought journey, but what an inspiration she is to those around her, and we hope, to families facing similar circumstances.

Michela’s medical journey began with a symptom many of us can relate to; she struggled with recurring headaches. It’s not something she gave much thought or credence to, after all, headaches were something her mother faced as well. It was probably just something that ran in the family.

Everything changed though on May 5, 2013 when Michela, at age 12, experienced a seizure while at a parish festival.

“It happened in a very public place, so I know it had to be terrifying for others to witness, particularly for my older sister who was with me at the time. I lost 15 minutes where I blacked out and have no memory. One minute I was sitting outside, the next I woke up to my dad stroking my hair,” Michela remembered.

The Durrette family called 911 and Michela was rushed via ambulance to Texas Children’s Hospital West Campus where she was quickly evaluated by a neurologist.

Over the next few weeks, the medical team ran a number of tests – all of which came back normal. An MRI was ordered, simply as a precaution, the family was told. As Michela and her mom were pulling away from the hospital following the study, her mom’s phone rang.

“She was crying and I didn’t know why. I could only hear half of the conversation,” Michela recalled.

The team got back to the family immediately. They found a brain tumor. Michela was diagnosed with grade III astroblastoma.

“My mom is actually the one who told me I had cancer. She’s always up front with me and that’s something I appreciate so much,” Michela said.

On May 31, 2013, Michela underwent brain surgery with Dr. Dan Curry, to remove a 3-centimeter tumor from her left frontal lobe. After six hours, surgeons came out and informed Michela’s family that the surgery was a complete success.

“It all happened so quickly. I had my MRI on Tuesday and was in surgery on Friday. They actually wanted me to have surgery on Thursday, but my older sister was graduating from eighth grade that day and I wasn’t going to miss that for the world. My family is incredibly important to me.”

While her friends spent their summers going on vacation and spending time with one another, Michela spent her summer undergoing 33 treatments of proton radiation. In August 2013, she completed her final treatment.

Although Michela missed out on normal activities that summer, and continued to experience a variety of symptoms as a side-effect of her treatment, she was granted a trip of a life time by the Make-A-Wish Foundation. The day after Michela’s 13th birthday, she and her family touched down in the small, coastal town of Giovinazzo, Italy where her maternal grandfather is from and where family she has never met live.

“When presented with the Make-A-Wish opportunity, I knew this is what I had to do. I spent a week there visiting with family. The first night, my cousins threw a huge party for me and we ate the sweetest-tasting pastries and best food I’ve ever had,” Michela recalled fondly.

While this experience provided Michela and her family an escape, when they returned to the States so did the medical follow-up.

Michela continued with frequent visits with Dr. Jack Su and the team at Texas Children’s Cancer Center. Her life was slowly creeping back to her new semblance of normal. The medical team cautioned her, as she got back into the full swing of her schedule, to temper her expectations regarding school performance.

You see, Michela was always a straight-A student, which was a source of great pride. “I was not about to let cancer get in the way of making the good grades I like making.”

At times, studying and keeping up at school proved challenging as Michela still faced a barrage of side effects: migraines, dizziness and fatigue, to name a few. Her cancer made her work that much harder.

“I worked around it,” Michela explained. “I found times to fit everything in and still managed to see my doctors and take care of myself.”

All of that dedication and hard work paid off. In May, Michela graduated as the Incarnate Word Academy class of 2019 valedictorian. She received a full four-year scholarship from the Terry Foundation to attend The University of Houston starting in the fall and was also awarded a scholarship from the Snowdrop Foundation. She plans to major in mechanical engineering with a minor in aerospace – she wants to work at NASA one day.

Michela’s journey against cancer hasn’t ended. She still comes back to Texas Children’s every year as part of the Long Term Survivor Program and is participating in a research study through Baylor College of Medicine looking at the effects of brain radiation on cognitive performance including short-term memory.

“When I was diagnosed, there wasn’t a lot of data about the success rates of this specific type of radiation. When I was going through everything, I knew I wanted to find a way to help others, to provide my data and my information so others in the future may know more than my family did. This is why research is so important to me,” Michela explained.

Michela is now six years cancer free and her tumor has never regrown. Something extremely rare for her particular diagnosis.

She has this advice for other kids who are facing similar diagnoses. “It seems like a lot. But it is definitely something that can be overcome. It’s not something that defines you. It’s simply a part of you. And there’s nothing wrong with that. Don’t look at it as something that makes you different, because what it does is make you special.”