Texas Children’s and Be The Match partner to hold “Cheek Week” event
Monkeys Have Pulmonary Hypertension, Too
Food Allergy: The Layers of Protection
Reducing the Risk of Children Developing Cancer Later in Life
Does my child need to be screened for cancer?
Department
Leukemia Program
Cancer and Hematology Center

Meet our local CMN champion: How Logan fought cancer like a superhero 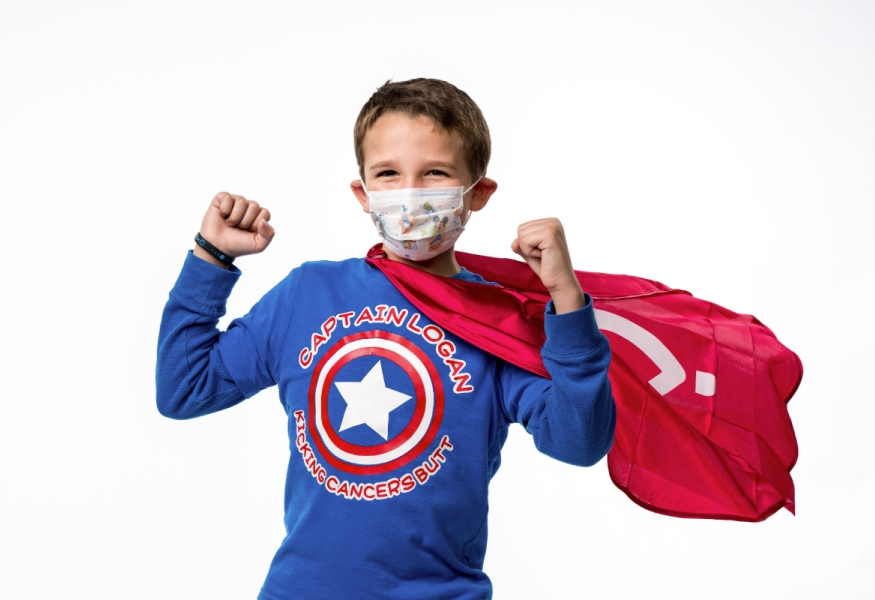 When Lauren Gans found out her 8-year-old son, Logan, was named Texas Children’s local champion for the Children’s Miracle Network (CMN), she couldn’t have been prouder. To her and many others, Logan is a superhero who shows what it means to be a champion in his brave battle against a frightening foe.

“Our son has taught us a lot about courage, tenacity and never giving up no matter how difficult the road may be,” Lauren said. “It is very fitting for Logan to receive this CMN recognition. His will to survive and beat cancer has been an inspiration to us all, and I hope his story will be a beacon of hope for others.”

Logan’s story began in July 2018 when he started coming down with what seemed to be a cold. He and his family attended a special event at his school when suddenly Logan became pale and then collapsed. Lauren rushed her son to see his pediatrician who discovered Logan’s hemoglobin was dangerously low. After being referred to Texas Children’s, Logan received several blood transfusions and had a battery of tests to determine what was wrong. After spending a night in the hospital, the Gans family received the devastating news.

“Our son was diagnosed with leukemia,” Lauren said. “We were crushed and frightened, yet determined to push forward and fight together with an amazing medical team at Texas Children’s Cancer Center. The love and support our physicians, nurses and staff provided us during this trying time was unmeasurable.”

Like a true champion, Logan pushed through his difficult, energy-zapping regimen of treatments, which included 10 months of intensive chemotherapy, 18 months of general chemotherapy, both at home and in the hospital, 26 lumbar punctures and two bone marrow checks. Mimicking his favorite superheroes –Captain America and Spider-Man – Logan’s “I can do this” attitude kept him strong against his opponent.

“With every obstacle, Logan tackled the enemy wearing a superhero costume,” Lauren said. “During his treatment, Logan put himself in all the theatrical superhero battle scenes and said that was him fighting cancer. Fighting evil. With tears in our eyes, we have loved how our son has channeled his strength. His love for people is larger than life and for this reason, he wants to be a superhero FBI agent to protect the world from evil. And I believe, it is his desire to fight evil that helped him through his cancer treatment.”

While 2020 was a challenging year for our family, one of the good things to emerge out of 2020 is when Logan “rang the bell” on Nov. 23, signifying the end of his treatment. Lauren says her fun loving autistic son, who was affectionately known as “Captain Logan” at the Cancer Center, not only fought for himself, he also looked out for other young patients going through treatment at the same time he did.

“Logan and I are very touched and thrilled to be considered and selected as Texas Children’s champion for the Children’s Miracle Network,” Lauren said. “Helping patients at Texas Children’s means so much to Logan and our family. Logan is looking forward to working with CMN and helping his favorite hospital.”

Champions Across America is a Children’s Miracle Network program that honors remarkable children  for their courage, tenacity and perseverance, and honors the doctors, nurses and therapists who helped them win life’s greatest battle.  Every year, 170 local CMN hospitals – like Texas Children’s – select a “Champion” whose courage and tenacity have helped them triumph over life’s greatest challenges.

Click here to learn more about Texas Children’s Cancer and Hematology Centers®, and how our world renowned team of experts are helping children fight and defeat cancer and blood disorders every day.