Texas Children’s and Be The Match partner to hold “Cheek Week” event
Monkeys Have Pulmonary Hypertension, Too
Food Allergy: The Layers of Protection
Reducing the Risk of Children Developing Cancer Later in Life
Does my child need to be screened for cancer?
Department
Histiocytosis Program
Cancer and Hematology Center 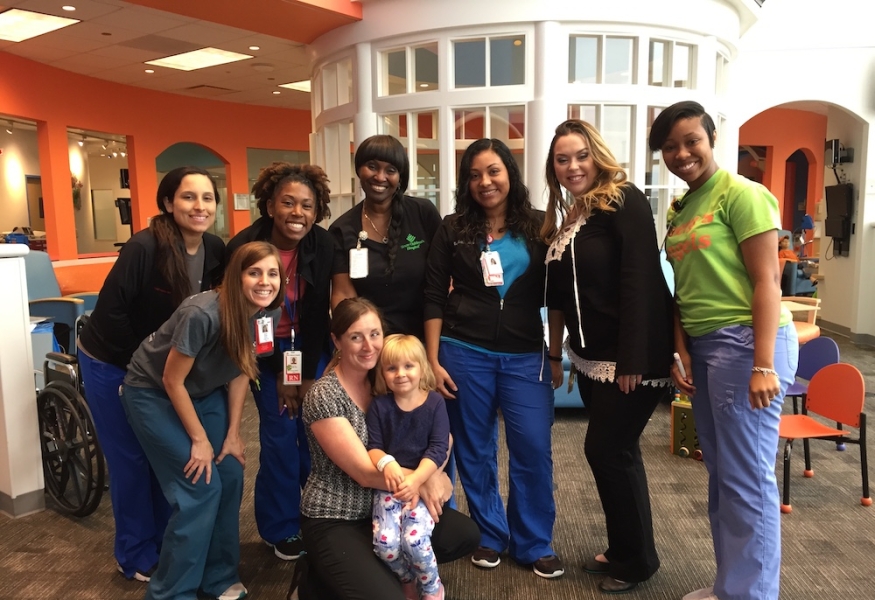 We were given Lilly’s diagnosis over the phone, as we were on our way home from the CT scan of her brain. We were finally told she had Langerhans cell histiocytosis (LCH) – after over a year of chasing the cause behind numerous ear infections, incurable rashes and an unquenchable thirst. This mouthful of words meant nothing to me. Nonetheless, it was an answer. Lilly was only 2 years old, and we were scared to death.

Lilly checked into Texas Children’s Cancer and Hematology Centers within the week, and we were completely unprepared for what would follow. Even though we researched LCH before the appointment, we still couldn’t find a known cause, and the treatments varied widely from case to case. We also found that Dr. Kenneth McClain and his team members were experts in histiocytosis and had a policy of working as a team with all of the doctors, nurses and additional care staff.

Lilly has the most dangerous type of LCH – BRAF-positive, high-risk, multisystem LCH. When she was first diagnosed, the LCH was in her bones, skin, pituitary gland and spleen. We chose to enroll her in a research program through Texas Children’s. She soon started her first chemotherapy treatment drug, cytarabine, in October 2013. We spent many weeks in the hospital. Lilly’s port got infected and was replaced. The chemotherapy caused high fevers, which involved trips to the emergency room and, typically, a hospital stay. It became difficult to juggle the appointments and inpatient visits alongside work requirements and spending time with our other daughter, Madi. Lilly’s care team went out of their way to ease the struggle of dealing with something so big. They worked with us to do the chemotherapy at home, when possible. They also went out of their way to make sure the kids in the infusion bay or hospital room stayed stimulated. We’ve learned so many different arts and crafts, watched many plays and musicians and visited with several superheroes. Lilly also won her favorite stuffed animal, “Bunny,” from Radio Lollipop by singing “Twinkle, Twinkle, Little Star” during a singing contest from her room. Lilly completed her treatment at the end of October 2014.

In March 2015, the LCH came back. It was confirmed. Lilly started a new chemotherapy treatment, clofarabine, which couldn’t be administered at home. Lilly visited Texas Children’s once a month to receive treatment at the infusion bay. While she was there, Lilly danced, played, made interesting art and solidified her nickname, “Silly Lilly.” We had to work closely with Lilly’s endocrinologist, Dr. Sheila Gunn, because the medication to control her diabetes insipidus (caused by LCH) became unpredictable with the new chemotherapy drug. In the end, all of the long treatments and hospital stays were worth it when Lilly rang the bell on Sept. 1, 2015.

Lilly’s scans were perfect with no evidence of disease through the rest of 2015 and most of 2016. Unfortunately, a skin lesion appeared on Lilly’s scalp in December 2016. We tried a new combination of oral chemotherapy, which didn’t require a port. Even though this combination cleared up the skin lesions, Lilly’s brain MRI showed neurodegenerative damage from the LCH in October 2017. So she started a new journey. Since she’s BRAF-positive, Lilly was placed on a new medication, a BRAF inhibitor. This helps prevent the accumulation of Langerhans cells by blocking the BRAF genes. We’ve had some setbacks with this medication so far, but Lilly is doing well and starting second grade.

Lilly’s story is proof of the consistent dedication from Texas Children’s in their mission to help patients and their families through these difficult illnesses. The staff members who check us in and out of our appointments remember Lilly every time we come in. The nurses cheer her on during her vitals. The phlebotomist remembers which arm she prefers to get poked. When Dr. McClain walks into the room, Lilly jumps up and hugs her dear friend. Then she shows off to impress him!

I get check-up calls from our care team, which often ease my mind after testing or insurance issues, you name it. Lilly’s team members aren’t just our heroes for continuing to work to keep her healthy – they’re like family. Their ability to seamlessly work together, from Texas Children’s Pediatrics to Texas Children’s Cancer and Hematology Centers, has given us positive outcomes that wouldn’t have been possible if each group was working alone. We’re unbelievably lucky to live in Houston and have access to both Texas Children’s Hospital and Texas Children’s Pediatrics.

Every September, our community comes together to raise awareness for histiocytosis. If you’re interested in learning more about Texas Children’s Histiocytosis Program, click here.