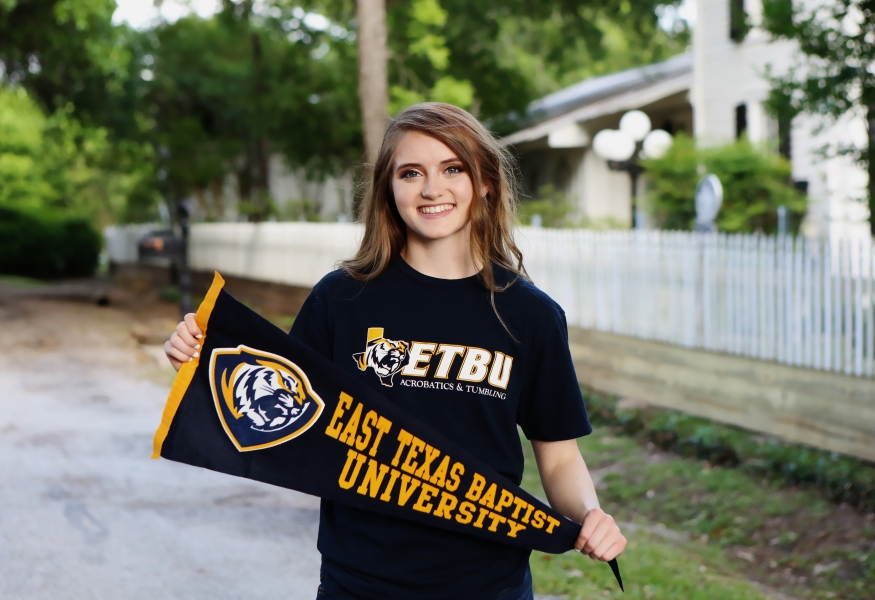 In April 2010, my 11-year-old daughter, Hailey, was diagnosed with a 10-centimeter-long, low-grade juvenile polycystic astrocytoma, which is a rare childhood brain tumor. Leading up to this diagnosis, Hailey was training as a Level 8 competitive gymnast for up to 30 hours a week. She had been complaining of recurring headaches, so we had her eyes checked, alongside her blood sugar and other counts. We eventually brushed these headaches off as a result of exhaustion from training. Things changed when Hailey suffered a small seizure while practice on the balance beam one day. We took her to our pediatrician, Dr. McPherson, who scheduled an electroencephalogram (EEG). We were just planning to depart to Denver for a regional competition, but Hailey obviously wasn’t feeling well. Later, a family friend pulled some strings to quickly retrieve a magnetic resonance imaging (MRI) of her brain. Our technician saw the tumor on her scan, which was immediately sent to Texas Children’s.

I had no idea how to tell my tiny, yet fierce, daughter she not only couldn’t compete at this competition she had worked hard in preparation for, but would also have to put gymnastics to the side for a while. So, I didn’t. We went to Texas Children’s, where medical staff helped us navigate our options while sharing limited information with Hailey to keep her focused on the positive aspects of her life, which would help her get through her impending journey. Eventually, our child life specialists helped us tell Hailey, her siblings and several friends what was going on and what was to come.

Soon after, Hailey underwent two tumor resection surgeries a week apart from each other. We prepared her by letting her know she had something in her brain that needed to be removed, and that she’d be fine. For her first surgery, 11 hours passed from the time I saw her last until she was awake. This was the longest day of my life as a mother. Our surgery team delivered plenty of updates throughout the process, but I was scared! Hailey did very well. One of the risks of the procedure was temporary loss of movement on her right side. When Hailey woke up, she was asked to lift her right leg. She not only lifted her leg, but also pointed her toe. Our team in the recovery room learned exactly what type of child they were dealing with.

Hailey did physical therapy between surgeries out of fear of losing her muscles. When the doctors then told us they wanted to go into her brain once more from a different angle to get some of the tumor out, I had to tell Hailey. It was hard enough the first time around, but again? We proceeded as if it were no big deal, and Hailey had her second surgery a week later where more than 95 percent of the tumor was removed. Everyone was so encouraging, from the doctors, to the nurses and even to the cleaning crew. They quickly realized how popular this tiny kid was, so Hailey was moved to a bigger room to accommodate all of her visitors. Soon after, our medical team decided to monitor the remaining tumor via MRI every three months.

During those first weeks after discharge from the hospital, Hailey was begging me to go back to the gym. First, we took her to just sit and watch. Then, to sit and do what she could, like bicep curls. As her surgeon released her to do more and more, she would do everything she could in the gym. For example, he told her not to go upside down for four months. So, she would put her body in positions as close to going upside down as possible on the bars. It was hard to watch as a mother, but I also learned of her passion for gymnastics, which kept her focused on the future instead of what she was going through medically.

From the outside looking in, people thought we were crazy. How could I let her do these things? Hailey always followed rules in regard to her recovery, but also always asked to bend the rules because she felt good. I’ll never forget the day she was released to go upside down. She did a handstand in the doctor’s office! There again, the staff was reminded exactly what kind of kid they were treating. For months, Hailey was seemingly fine. Her scans and symptoms were normal. Hailey was training full-time again at 30 hours every week, and became the state bar champion that year. Her comeback was incredible!

In the spring of 2012, Hailey started having seizures. First, we tried several different medications to treat them, but nothing worked. Over the next year, imaging pointed to small changes in her tumor. We were advised to pursue proton therapy at a nearby facility, where she eventually underwent 25 treatments. Hailey, still training, broke her knee and tore her PCL, MCL and meniscus the day before she was to start proton therapy. In turn, we had radiation early the next morning and knee surgery that afternoon. Nothing was going to stop Hailey from reaching her goals, but the seizures persisted. Hailey lost most of the hair on her head, and was approaching the start of high school.

Hailey’s seizures began to worsen, so we met with Dr. Curry to discuss another tumor resection surgery, which meant removing the part of her brain where the seizures were starting. It sounded outrageous to me, and I was scared, but Hailey was all for it. She just wanted to be a normal teenager, and do gymnastics to her fullest potential. Now 14 years old, things were different with Hailey. I couldn’t limit information for her. She had a smart phone and could do all the research herself if she wanted to. I began including Hailey in all of her health decisions, and I encouraged her to ask lots of questions.

The testing for this procedure took several months, giving us plenty of time to prepare. In surgery, Hailey was awake for a portion. Her recollection of these moments are vague, but she gets to tell people she was awake in brain surgery – how many kids get to say that line? Hailey’s surgery was successful for a while. Her seizures halted and she felt great. Soon, she was back to gymnastics training. Over the next year, small seizures returned and we began to think more long-term about Hailey’s treatment. She was on a very high dosage of anti-convulsion medications, but still facing seizures.

Dr. Curry then told us of the vagus nerve stimulation (VNS) implantation, which would prevent seizures by sending mild pulses of electrical energy to the brain through the vagus nerve. Of course, Hailey was all for trying something to reach normalcy. Hailey received the implant in 2016 and has been doing great ever since. Following the implantation, her dad took her to Rio de Janeiro to watch USA Gymnastics Women’s National Team dominate at the 2016 Summer Olympics, where Hailey originally dreamed to compete as a child. She was happy to be cheering for our team, though.

Now, we’re in the process of lowering Hailey’s medication. She’s graduating from high school shortly, and will be competing for East Texas Baptist University’s Acrobatics and Tumbling team this upcoming fall.

Over the past eight years, we’ve learned a lot about the importance of placing focus on the positive things ahead. I’ve learned to be inquisitive about my concerns for my daughter’s health, and I learned a lot of things I never knew about. I also learned how a particular atmosphere could mean everything when it comes to caring for a child. Texas Children’s Hospital will always hold a special place in the hearts of our family, and we can’t thank them enough for everything they’ve done for us. Hailey has new dreams and goals to look forward to now, and she wants to be a part of the hospital that took care of her while she grew up. She wants to help other children like herself, in the same manner she was treated. I’m so proud of my daughter, and I’m beyond excited for the future she envisions for herself. When Hailey was first diagnosed with a brain tumor, her teammates had shirts made that said “HOPE for HAILEY.” Over the years, the word “hope” has conveyed many different meanings to us. Now, we hope for the best life Hailey can live.