Grant’s story: My son’s brave and courageous battle against histiocytosis 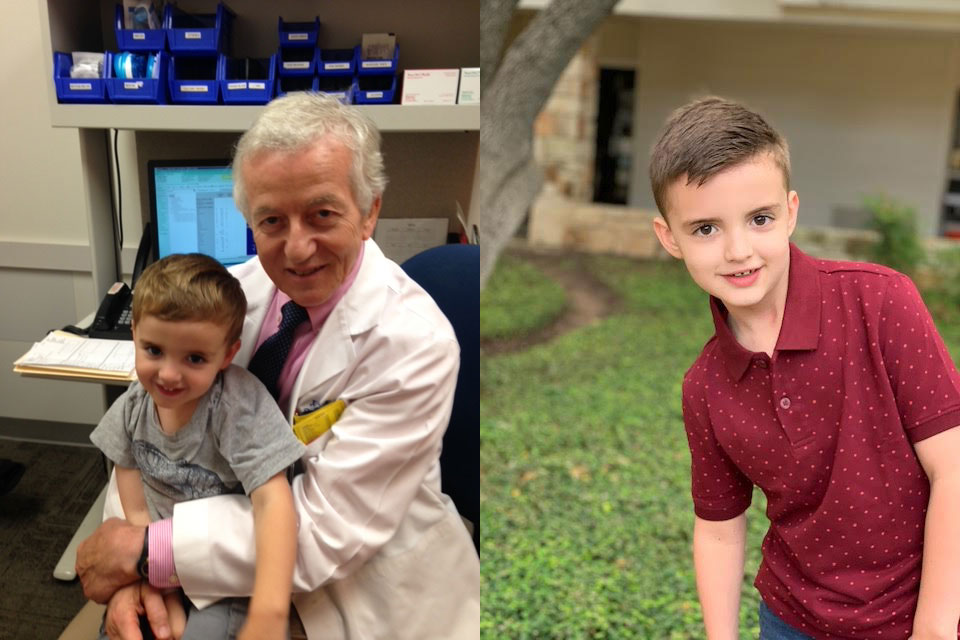 Carolyn Caudle says her son, Grant, is an inquisitive 8-year-old. From a very young age, her son has always expressed an interest in how things operate. He loves trucks and trailers, and figured out how a pulley system works to tow a car. He has even helped his family assemble new furniture. Beyond his mechanically-inclined abilities, Grant is a brave fighter who overcame some of life’s toughest hurdles.

“When Grant was 2 years old, he wanted to potty train,” Carolyn said. “I am glad he was an early potty trainer because I noticed he was going to the bathroom often, like every 15 to 30 minutes. His thirst increased at this time as well. I thought it was very strange. So, I took him to the pediatrician, and I was told that Grant’s frequent urination was due to him drinking too many fluids. But then, I noticed Grant had lost a little bit of weight and he looked thin. He was tested for diabetes, and his blood test was normal. However, his extreme urination and thirst did not improve. I took him back to his pediatrician. When he still couldn’t figure out what was wrong with Grant, he referred us to a hospital near our home in Austin.”

Carolyn and her husband, Andy, hoped more tests would help them find definitive answers to their child’s perplexing symptoms. When the results came back, they finally learned what was wrong with their son. Grant was diagnosed with two rare conditions – diabetes insipidus and Langerhans cell histiocytosis.

Diabetes insipidus occurs when the kidneys release a large amount of fluid in the urine due to problems associated with the secretion of vasopressin, a hormone in the pituitary gland that controls the amount of water the kidneys excrete in the urine. Children with this condition can pass between three and 20 quarts of urine in one day compared to a healthy child, who typically passes one to two quarts of urine per day.

Grant was also diagnosed with Langerhans cell histiocytosis (LCH), a rare cancer of white blood cells in which an overabundance of these cells can cause damage to the skin, bone and other organs. The disease affects both children and adults. The incidence in children is approximately five per million.

“We were overwhelmed but relieved to finally get a diagnosis for our son,” Carolyn said. “Grant also had lung tumors most likely caused by the LCH. Grant started chemotherapy for LCH, but the treatments made him very lethargic and he didn’t have much of an appetite. The chemotherapy helped to a certain extent, but his lungs were not improving. Then, in Sept. 2015, I heard about Dr. Kenneth McClain who had extensive experience treating children with LCH at Texas Children’s Hospital. I heard great things about him through a histiocytosis group on Facebook. The hospital was hosting a Histio Family Day, and we flew to Houston to attend the event. There, I met with Dr. McClain and shared my son’s story. His knowledge base was so vast and it was reassuring to know he treated hundreds if not thousands of children with this condition over the years. A few days later, we had our first visit with Dr. McClain.”

Prior to coming to Texas Children’s, Grant had already completed six months of chemotherapy. Dr. McClain switched Grant to a new treatment regimen that proved to be more beneficial in his case.

“We’ve used cytarabine as a single therapy for LCH for some time, and believed it to be better, especially for patients who have lung and pituitary disease,” said Dr. McClain, co-director of the Histiocytosis Program at Texas Children’s Cancer Center. “At the time, we were pioneering the use of cytarabine as a single agent instead of the classic vinblastine and prednisone treatment for LCH. When a patient has excessive thirst and urination caused by the dysfunction of the pituitary gland, it is very hard to get the right dose of vasopressin to treat diabetes insipidus. We have since started a randomized clinical trial comparing vinblastine/prednisone versus cytarabine alone for new LCH patients. Twelve institutions have opened the study which we lead. Other institutions rarely used cytarabine until we started promoting our successes.”

In Nov. 2016, Grant completed one year of chemotherapy (cytarabine) at Texas Children’s. He has been in remission for five years, and Dr. McClain says there is very little chance his cancer will relapse.

“I am grateful to Dr. McClain for helping Grant beat histiocytosis,” Carolyn said. “Grant is doing well – his appetite is back to normal, and he is very energetic. His scans this past summer came back normal, and his lungs are improving as well. We are so thankful to Texas Children’s Cancer Center. Whenever I talk to patient families faced with this diagnosis, I encourage them to schedule an appointment with Dr. McClain. What I often ask them is, ‘Do you want a physician who is reading the research or one who is involved and writing the research?’ Texas Children’s has the lead in advancing LCH research. Additionally, our family had a wonderful experience with Dr. McClain. He is very caring and has this way of connecting with his patients. Not all doctors are easy to reach. With him, if I have a question or need to leave a message with his nurse, he and his staff always reached out to me – and I didn’t have to wait long to hear back.”